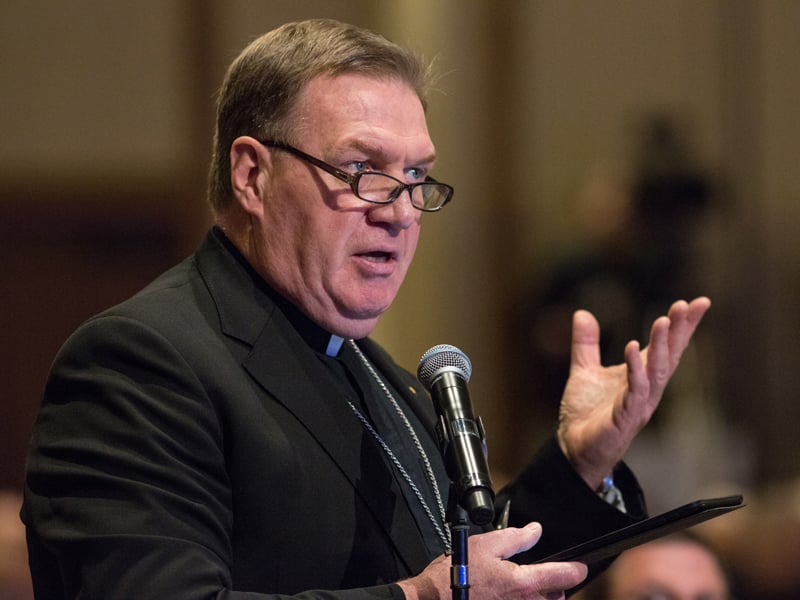 (RNS) Pope Francis had already delivered the Catholic Church’s version of an October surprise when he included Indianapolis Archbishop Joseph Tobin in the batch of new cardinals he announced last month — promising a red hat to the leader of a relatively small Midwestern diocese of 230,000 Catholics that had never before had a cardinal, nor would ever expect one.

Then on Monday (Nov. 7) the pontiff doubled down with a November stunner as the Vatican announced that Francis was moving Tobin to head the Archdiocese of Newark in New Jersey. He replaces Archbishop John Myers, who is resigning at age 75.

In a statement released early Monday after the Vatican announcement was official, Tobin, 64, compared these last few weeks to an earthquake, saying the news on Oct. 9 that he would become a cardinal was his “first jolt” and the phone call on Oct. 22 informing him that he would be going to Newark was a “second tremor.”

Never before has a cardinal been moved from one diocese to another, and church observers across the board also expressed shock at the unprecedented transfer, which seemed to signal a new stage in Francis’ effort to revamp a U.S. church that had become increasingly conservative under the pontiff’s two predecessors.

Not only is Newark a much bigger archdiocese than Indianapolis, with some 1.2 million Catholics, but it’s never had a cardinal and, like Indianapolis, never expected to get one.

That’s mainly because a cardinal perched across the Hudson River from Manhattan would have been seen as a rival to the archbishop of New York, a post currently occupied by Cardinal Timothy Dolan.

And that’s exactly what’s likely to happen now, especially since Tobin is clearly a personal favorite of the pope’s and Dolan has been associated with Francis’ conservative critics.

“(T)he move portends an ecclesiastical scenario heretofore unseen on these shores nor anywhere else in the Catholic world: two cardinals leading their own local churches not just side-by-side, but within the same media market,” wrote Rocco Palmo, whose blog, Whispers in the Loggia, specializes in clerical gossip.

Moreover, Tobin’s promotion — which was first reported Friday by The Star-Ledger of Newark — was also viewed by church observers as something of a snub to Archbishop Charles Chaput of Philadelphia. Philadelphia’s five previous archbishops, going back nearly a century, had all been made cardinals.

But Chaput, 72, is seen as a culture warrior out of step with Francis’ more pastoral and welcoming vision of the church. That Chaput seems destined to end his career without a red hat, and a possible vote in an eventual conclave to elect a pope that comes with being part of the College of Cardinals, is a bitter pill for many on the Catholic right.

All of this reinforces the obvious fact that Francis clearly cares little for protocol, or bruised egos; the cardinals he named last month come from 11 dioceses that had never had a cardinal — including Indianapolis — and six countries that have never before had a cardinal.

At the same time Francis overlooked dioceses that for centuries had been considered a lock to have a cardinal.

But the transfer of Tobin to Newark also underscores the challenges that Francis faces in a country that has produced some of his sharpest critics.

One is that “the pool of ‘Francis bishops’ is still rather small in the U.S., where the footprint left by the appointments of Saint John Paul II and Pope Emeritus Benedict XVI is more significant than in many other countries,” said Massimo Faggioli, a theologian and church historian at Villanova University in Philadelphia.

Indeed, more than three decades of promoting conservatives left a limited supply of more pastoral leaders for Francis — who was elected in 2013 after Benedict retired — to choose from, and reorienting the machinery of episcopal vetting and selection and restocking the supply chain of talent can take a long time.

That’s why, Faggioli said, Francis “likes to move bishops that he knows well to important and strategic posts in the U.S. church.”

Francis showed that when he personally picked Archbishop Blase Cupich — who will also be made a cardinal in Rome this month — to go from the small Diocese of Spokane to the influential Archdiocese of Chicago two years ago, another surprising move.

Similarly, Francis also knows Tobin and knows that under then-Pope Benedict XVI, Tobin was effectively exiled to Indianapolis in 2012 from a senior job in Rome because Tobin disagreed with the Vatican investigation of American nuns.

For Francis, who has made overhauling the papal bureaucracy a priority, poor treatment at the hands of the Roman Curia is a resume builder. Tobin also clashed with Indiana Gov. Mike Pence — now Donald Trump’s running mate — over Pence’s effort to stop the settlement of Syrian refugees.

Another challenge for Francis is that many of those John Paul and Benedict appointments have not always turned out so well.

Newark is a case in point. Archbishop John Myers was sent there in 2001 by John Paul to replace Cardinal Theodore McCarrick — who was moved to Washington, D.C., where he was made a cardinal — and Myers’ quickly alienated many inside and outside the church with his hard-line approach and a seemingly high-handed persona.

That was not only a contrast to McCarrick’s approachable style, but Myers was also widely criticized for mishandling clergy sex abuse cases. In addition, Myers outraged many in the flock when local media detailed pricey renovations he made to a retirement home.

Morale was so low in the archdiocese that in September 2013 Francis named Archbishop Bernard Hebda, also regarded as a pastor in the pope’s mold, as a coadjutor, or assistant, to Myers with the intention of replacing Myers with Hebda.

But after more than two years preparing to take over, Hebda was moved last March to take charge of the Archdiocese of St. Paul and Minneapolis following the departure of Archbishop John Nienstedt, who left under a cloud of various scandals.

The upshot is that not only does Francis want to overhaul the church’s U.S. leadership, but he has a lot of fires to put out in the American hierarchy and, for now at least, only so many firefighters he can call on.

Church observers say that recent moves by the pope indicate that he has decided to take a more forceful hand in moving to promote bishops who share his approach in an effort to reorient the U.S. Conference of Catholic Bishops more quickly.

Yet that doesn’t mean all these decisions are necessarily good ideas.

“This move doesn’t really make sense to me,” said the Rev. Thomas Reese, a Jesuit priest and analyst for National Catholic Reporter who has written extensively on the political dynamics of the hierarchy.

“Newark is a big archdiocese and Tobin will have to take time to get to know the people and the priests,” Reese said, “and that will take time away from the work he could be doing in the USCCB and as a cardinal advising the pope.”

On the other hand, getting to Rome from Newark is a lot easier than it is from Indianapolis, and Tobin is likely to be logging a lot more frequent flier miles if Francis looks to consult him on how to move the American church in a new direction.