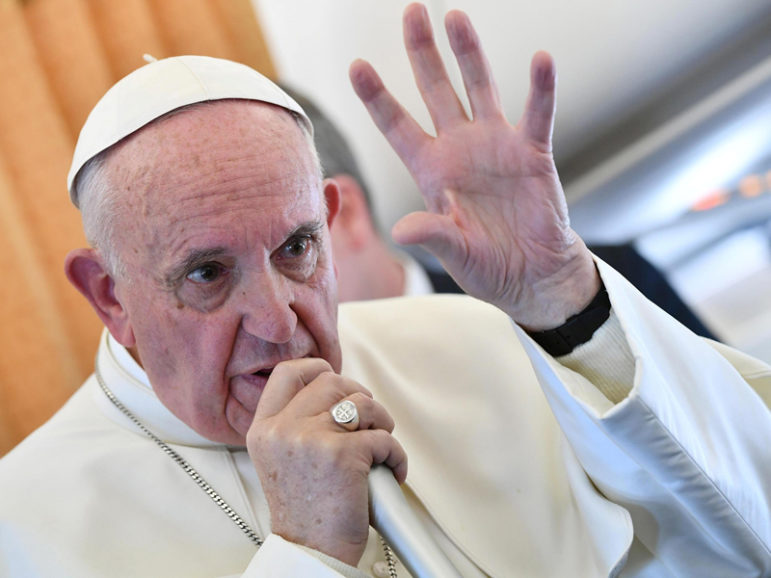 Pope Francis speaks to journalists on his flight back to Rome from Sweden on Nov. 1, 2016. Photo courtesy REUTERS/Ettore Ferrari/Pool

VATICAN CITY (RNS) Pope Francis has urged Donald Trump not to forget the poor and marginalized in his first comments on the president-elect to be published after the Republican’s stunning election win.

In an interview conducted Monday (Nov. 7) on the eve of the election and published Friday by an Italian daily, the Argentine pope declined to make any judgment about Trump.

“I do not judge people or politicians,” the pope told Eugenio Scalfari of La Repubblica when asked what he thought of Trump. “I only want to understand what suffering their behavior causes to the poor and the excluded.”

Throughout the interview the pope reinforced his concern for the disadvantaged and said his greatest worry was for migrants and refugees who were forced to flee their countries and the poor in wealthy countries afraid to accept them.

“These are measures that are opposed by the people who fear losing their jobs and seeing their salaries reduced,” Francis said, giving his view on a dynamic that was believed to play a major role in the U.S. presidential race.

“Money is against the poor and against immigrants and refugees but there are also the poor within rich countries, who fear the arrival of those who are like them from poor countries,” Francis continued.

“It is a perverse vicious circle and it needs to be stopped. We need to knock down the walls that divide us: try to boost well-being and make it more widespread but in order to achieve this, we need to knock down walls and build bridges that can lessen inequality and boost freedom and rights … What we want is a fight against inequality, this is the biggest evil that exists in the world today.”

Earlier this year, the pope provoked an angry response from Trump when he questioned his stance on immigration and his pledge to build a wall on the border between the U.S. and Mexico to stop migrants.

“A person who thinks only about building walls, wherever they may be, and not building bridges, is not Christian. This is not the gospel,” Francis said after an official visit to Mexico.

According to the Pew Research Center, Catholics and evangelical Christians played a critical role in Trump’s election — 52 percent of Catholics voted for the real estate mogul and neophyte candidate.

READ: The religious factors in the election

In the La Repubblica interview, Francis spoke of his admiration for civil rights leader Martin Luther King Jr., saying that love alone is capable of breaking the cycle of hatred and evil.

He also dismissed suggestions he was a communist. “My response has always been, if anything, is that there are communists who think like Christians.

“Christ spoke of a society where the poor, the weak and the excluded are there to decide. Not the demagogues.”

On Saturday the pope gave a speech in which he urged social justice activists from around the world not to give into the politics of fear.

“Because fear — as well as being a good deal for the merchants of arms and death — weakens and destabilizes us, destroys our psychological and spiritual defenses, numbs us to the suffering of others,” he said. “In the end it makes us cruel.”

News
For many who lost loved ones to COVID-19, this Day of the Dead will be a time of healing
News
After Nice attacks, Pope Francis and French Catholics call for peace with Muslims
Opinion
Pope Francis on civil unions: Another step toward common ground with the LGBTQ movement
News
Jerry Falwell Jr. announces lawsuit against Liberty University over his ouster
Spiritual Politics
The nondenominational Donald
© Copyright 2020, Religion News Service. All rights reserved. Use of and/or registration on any portion of this site constitutes acceptance of our User Agreement and Privacy Policy, Privacy Statement and Cookie Notice. The material on this site may not be reproduced, distributed, transmitted, cached or otherwise used, except with the prior written permission of Religion News Service.