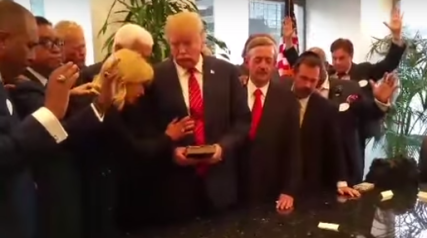 Evangelical pastors lay hands on Donald Trump and pray for him. Screenshot from video

(RNS) The story of religion in the election goes like this.

Donald Trump kissed up to the old religious right and reaped the reward. Eighty-one percent of white evangelicals voted for him, as compared to 79 percent for George W. Bush in 2004, 73 percent for John McCain in 2008, and 79 percent for Mitt Romney in 2012.

So much for Russell Moore and the handful of #NoTrump evangelical leaders.

As Catholics went, so (per usual) went the nation. But with 52 percent voting for Trump against 45 percent for Hillary Clinton, the margin for the victor was bigger than it’s ever been this century.

So much for Latinization pulling the Catholic Church in America towards the Democrats.

The God Gap — measured by weekly worship attenders’ preference for Republican candidates — was 16 points. That’s a few points smaller than it’s been since 2000, but definitely in the same ballpark.

So much for indications that, for the first time since 1968, the God Gap would be smaller than the Gender Gap. The margin by which women chose Clinton over Trump was 12 points (54-42).

Nones kept the Democratic faith. They voted 68 percent for Clinton versus 26 percent for Trump, giving her a margin slightly smaller than they gave Obama four years ago (70-26).

Jews moved in the opposite direction, increasing their margin of support for the Democrat by eight points over 2012, from 69-30 to 71-24.

Jews tend to believe that hate-spewing demagogues won’t be good for the Jews.

Bottom line: Catholics and white evangelicals made the difference for Trump.