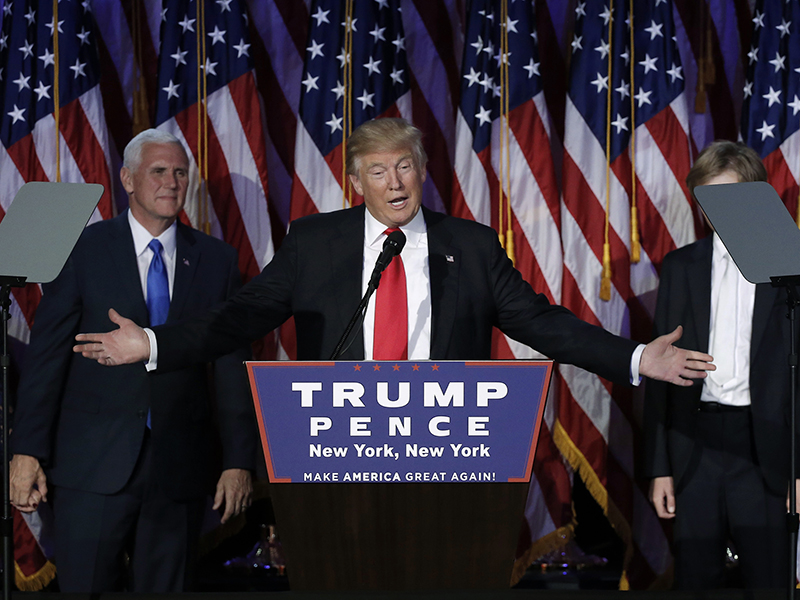 (RNS) If President Obama’s appearance at the Notre Dame commencement in 2009 sparked an unprecedented uproar among American Catholics, imagine what inviting President Trump to graduation might provoke.

That concern is making Notre Dame's president, the Rev. John Jenkins, think twice about making a pitch for the incoming U.S. president to receive an honorary degree, an appearance that almost any school would normally covet -- and one that the iconic Catholic university has been more successful than others in securing.

“I do think the elected leader of the nation should be listened to. And it would be good to have that person on the campus -- whoever they are, whatever their views,” Jenkins told the student newspaper in an interview published Friday (Dec. 2).

“At the same time, the 2009 commencement was a bit of a political circus, and I think I’m conscious that that day is for graduates and their parents -- and I don’t want to make the focus something else," Jenkins told The Observer, the paper serving the campus near South Bend, Ind.

“My concern a little bit is that, should the new president come, it may be even more of a circus,” he added.

"Circus" may even be an understatement in describing the controversy over Jenkins' decision to invite Obama to give the main commencement address in May 2009 and receive an honorary degree.

The country had largely welcomed the election of the nation's first African-American president a few months earlier.

But many in the U.S. hierarchy, which was dominated by conservatives more than it is today, had forcefully opposed Obama, focusing on his support for abortion rights as the chief reason for their stance.

When Jenkins decided to honor Obama at graduation that May, conservatives were livid. Many cardinals and bishops denounced Notre Dame and Jenkins, and some alumni organized lobbying efforts to reverse the invitation.

Many other Catholics couldn’t understand the opposition; Jenkins explained that he was honoring Obama not for his position on abortion rights but because he was the first African-American president and because the university had a tradition of inviting presidents to commencement.

Notably absent from that list is Bill Clinton (president from 1992-2000), whose position on abortion rights put him at odds with the hierarchy.

But Jenkins, who became Notre Dame president in 2005, has shown himself willing to take a broader approach to such invitations.

Besides Obama in 2009, Jenkins earlier this year presented former GOP House Speaker John Boehner and Vice President Joe Biden with a prestigious award aimed at honoring the two Catholics and political foes as a pointed rebuke to the polarization and ugliness of American politics.

Yet Biden’s support for abortion rights also sparked protests, though they were far more muted than in 2009 when Obama was honored.

For Jenkins, the calculus with Trump is different, and more complex.

For example, Trump was a longtime supporter of abortion rights who ran as an abortion opponent. While some in the anti-abortion camp doubt his bona fides on their issue, others, especially prominent Catholic leaders, said that was enough reason to back the Republican nominee despite his many other drawbacks. So his appearance would likely not draw the ire of most abortion foes.

Also Trump wound up winning the overall Catholic vote convincingly over Hillary Clinton, by 7 percentage points. But he ran especially strong among white Catholics while Latinos went strongly for the Democrat.

But Trump’s other stances and his conduct during the campaign and since the election also raise big red flags.

Chief among them is his record of harsh rhetoric against immigrants and threats to deport millions of them, in particular young people who came to the U.S. as children.

Jenkins, along with more than 100 leaders of other Catholic colleges, has vowed to protect any Notre Dame students from efforts by the incoming Trump administration to deport them.

“If there should be an effort to do that, we would do everything we can to fight that, whatever way we can,” Jenkins, a priest of the Congregation of the Holy Cross order that runs Notre Dame, told The Observer. “Not only for these young people who are Notre Dame students, but for the good of the nation.”

Moreover, Trump ridiculed the disabled, threatened to jail his opponent and challenge the elections results as “rigged,” and he is not opposed to gay marriage, an issue that the bishops have put on par with abortion as a danger to American society.

His campaign also provided an outlet for white supremacists, anti-Semites and Islamophobes, and hate crimes have spiked since his election even as he has chosen white nationalists for prominent roles in his administration.

Trump also referred to women in demeaning terms and boasted about seducing and sexually exploiting women, about harassing and even assaulting them.

All of those issues would be problematic factors for Notre Dame, but the sexual assault issue is an especially sensitive flashpoint given the growing awareness of the problem of campus rape.

Jenkins told The Observer that he plans to select a commencement speaker sometime during the spring semester.