(RNS) Native American and other religious leaders called the U.S. Army Corps of Engineers’ decision to deny an easement for the $3.8 billion Dakota Access pipeline an answer to prayer.

As many as 8,000 people at one time have gathered in camps in the hills along the Cannonball River in North Dakota to join the Standing Rock Sioux Tribe in a spiritual movement protesting the construction of the pipeline.

Their rallying cry has been “Mni wiconi” (Lakota, meaning “water is life”) as they have maintained the pipeline’s planned river crossing upstream from the Standing Rock Sioux Reservation posed a risk to its water supply. It also would have crossed through lands considered sacred by the Sioux.

“Throughout this effort I have stressed the importance of acting at all times in a peaceful and prayerful manner – and that is how we will respond to this decision,” said Standing Rock Sioux Tribal Chairman Dave Archambault II in a statement about the Sunday (Dec. 4) decision.

“With this decision we look forward to being able to return home and spend the winter with our families and loved ones, many of whom have sacrificed as well. We look forward to celebrating in wopila, in thanks, in the coming days.”

Energy Transfer Partners LP and Sunoco Logistics Partners LP who are behind construction of the Dakota Access pipeline, responded to the news Sunday with a statement calling the decision a “purely political action.”

Here is how others responded to the Army Corps of Engineers’ decision: 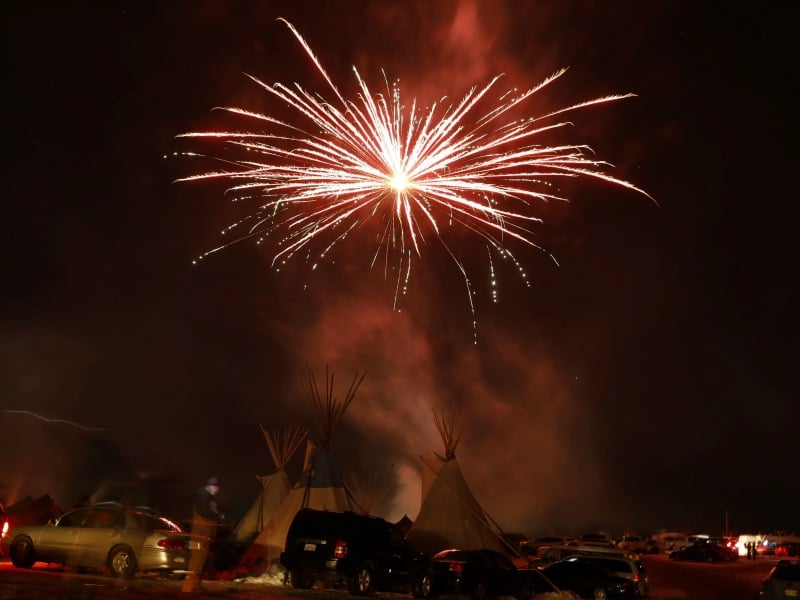 Fireworks explode above tipis Dec. 4, 2016, inside of the Oceti Sakowin Camp as celebrations continue after the Army Corps of Engineers denied an easement for the $3.8 billion Dakota Access pipeline to pass adjacent to the Standing Rock Indian Reservation, near Cannon Ball, N.D. Photo by Lucas Jackson/Reuters

National Congress of American Indians President Brian Cladoosby released a cautiously optimistic statement: “This isn’t over, but it is enormously good news.”

“Our prayers have been answered. … From the beginning, the Standing Rock Sioux Tribe has asked for a full environmental analysis to consider threats to the water, and also the social and cultural impacts. Peace, and prayer, and water protectors have led to the right outcome.”

“We can all pause to celebrate the Creator,” he added. “In the New Year, let us put our minds together and see how we can find a solution.”

Member communions of the NCC and Creation Justice Ministries both sent delegations to Standing Rock to express solidarity with the Sioux. In a joint statement, the leaders said they hoped it would be seen as a “turning point in the troubled relationship Native Americans and Christians have often shared throughout history.”

And Creation Justice Executive Director Shantha Ready Alonso added, “As Christians, we have a moral responsibility to stand with indigenous peoples to protect their sovereignty, and God’s creation.”

Rabbi Arthur Waskow of The Shalom Center included “a moment of celebration” for the Army Corps decision as well as “a moment of grief for the human costs of the victory” in the center’s weekly email newsletter, The Shalom Report.

Last week, the center delivered to President Obama and the Standing Rock Sioux Tribe a “Rabbinic Statement on Standing Rock,” signed by more than 300 rabbis.

“The victory of Standing Rock was won by months of determined prayerful public nonviolent challenge by Native communities and their non-Native allies,” he wrote.

The Minnesota director of the Council on American-Islamic Relations, America’s largest Muslim civil liberties and advocacy organization, recently had joined other Islamic leaders at Standing Rock.

“American Muslims will continue to stand in solidarity with Native Americans by respecting their culture, heritage and lands. We urge President-elect Trump to abide by this decision when he takes office.”

The AHA sent several representatives to Standing Rock early last month to “affirm the importance of human responsibility and human accountability to identify injustice and to respond accordingly to validate the inherent value of those whose humanity is marginalized.” It also partnered with Foundation Beyond Belief to raise money to help winterize the camps.

“The decision to halt the Dakota Access pipeline construction is a victory for Natives, environmental advocates and the progressive community as a whole. Rather than promoting fossil fuel energy that pollutes our water and contributes to the environmental disaster that is climate change, our government should listen to the scientists urging us to invest in sustainable, renewable energy for the good of our planet and our own existence.”