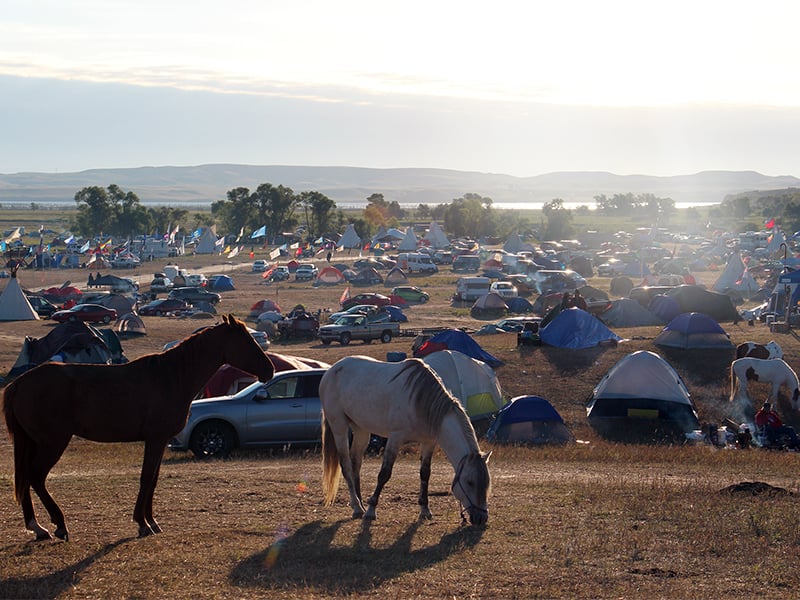 Horses graze early on the morning of Sept. 14, 2016, at the Oceti Sakowin camp near the Standing Rock Reservation in North Dakota, where thousands of people are camped in solidarity with the Standing Rock Sioux Tribe in opposition to the Dakota Access pipeline project. It's reportedly the largest gathering of Native Americans in more than a century. RNS photo by Emily McFarlan Miller
December 7, 2016
The Conversation

The Army Corps of Engineers, the federal agency responsible for investigating, developing and maintaining water and related environmental resources, recently announced that it would not allow the Dakota Access pipeline to be constructed under the Missouri River and through Lakota territory.

This decision essentially ended the Standing Rock Sioux tribe’s protest against the pipeline, which it claimed would both desecrate their sacred sites and cause potential environmental harm.

“Standing Rock could not have come this far alone. Hundreds of tribes came together in a display of tribal unity not seen in hundreds of years. And many thousands of indigenous people from around the world have prayed with us and made us stronger.”

Thousands of people, both those within Native American communities and their non-Native allies, felt called to go to Standing Rock. But what drew that many people to Standing Rock?

As a Native American scholar of environmental history and religion, I believe that for most individuals who gathered at the site, it was a modern-day pilgrimage.

First, what is a pilgrimage? Anthropologists Victor Turner and Edith Turner in their classic study “Image and Pilgrimage in Christian Culture”addressed that question when they researched the personal motivations of those who traveled long distances on pilgrimage.

Their answer was twofold. The Turners contended that individuals on a spiritual quest seek both an “out of this ordinary world” experience and a sense of community, “unity” or “oneness” with those on a similar quest. Individuals on a pilgrimage usually have these experiences both while traveling to certain places of transcendence and while at those sacred places.

Lakota scholar Philip Deloria, has also described how the transformative experience of Native American sacred places provides meaning and personal growth for individuals who journey to be in their presence.

In the book “American Indian Places,” Deloria discusses how people are likely to return to these important places again and again.

Going to Standing Rock evolved into a pilgrimage for many Native Americans: they left their “ordinary” lives behind to journey to a Lakota sacred place, and participate in a larger collective action.

My cousin Renee LaPier and her daughter Modesta LaPier, for example, journeyed 2,600 miles to and from Standing Rock. As Ojibwe women, with family on the Turtle Mountain reservation in North Dakota, they felt inspired to go to Standing Rock after meeting hundreds of like-minded individuals at a “water protectors” gathering they organized in their hometown of Portland, Oregon.

Going to Standing Rock forced them and others to step out of their “ordinary” modern lives and travel to a remote rural area of the U.S. with few amenities including no cellphone coverage. And once at the site, they encountered a transformative experience. Reflecting on her experience, Renee said, “It’s personal. It’s deeply deeply personal. It’s important for all of us to stand up together.”

It is not just Native Americans who have gone to Standing Rock. On Dec. 5 an estimated 2,000 U.S. veterans, both Native American and their non-Native allies, made their pilgrimage to Standing Rock in a freezing blizzard. They came from across the U.S. and other parts of the world; they represented American veterans from many conflicts and wars, including older Korean and Vietnam vets and younger Iraqi vets. They said they came to Standing Rock for “peace and prayer.”

What does this mean?

Religious scholar Laurel Zwissler has studied why and how young people are “refocusing their personal religious practices” to include “religious practice with public action.” She explains how they are blending their individual religious ideas and political activism into a new form of religious expression.

Zwissler’s research reveals participating in protests, even those across a great distance, becomes a new place of individual and collective spiritual practice.

Many Native Americans and non-Native allies viewed going to Standing Rock as a pilgrimage. I have read hundreds of social media posts of people who were drawn to go there as a spiritual quest, reflecting on how the experience changed their sense of identity, gave meaning to their lives, provided a sense of community and transformed them forever.

Even Archambault, in an address to the veterans, said their pilgrimage had meaning because “What you’re doing is sacred.”

I believe a modern kind of pilgrimage for Native Americans is emerging in which people travel to sites of collective action as a form of religious practice. It is true that some come for personal goals of spiritual awakening and some to journey to a sacred place. And, there are others who undertake a spiritual journey to find community, and purpose.

In the end, utilizing prayer and ceremony, they would have all experienced a pilgrimage -- returning to their home different from when they left.