Trump gave a thumbs-up to some supporters as he entered the Washington National Cathedral — an Episcopal church that traditionally hosts the post-inaugural National Prayer Service.

U.S. President Donald Trump sings while accompanied by his wife, Melania, Vice President Mike Pence and his wife, Karen, far right, during a prayer service at Washington National Cathedral the morning after his inauguration, in Washington, D.C., on Jan. 21, 2017. Photo courtesy of Reuters/Kevin Lamarque

People gather inside the Washington National Cathedral before the start of the National Prayer Service on Jan. 21, 2017. RNS photo by Adelle M. Banks

Trump, a Presbyterian, folded his arms at times and sat silently next to his wife for most of the 70-minute service, though he joined in some songs and in reciting The Lord’s Prayer.

There was no sermon by prior arrangement. However, Episcopal Bishop Mariann Budde of Washington offered a welcome message.

“As we mark this moment of political transition, let us all draw strength and courage from the sacred texts, songs and petitions from the many traditions of our land,” she said. “May they inspire us always to seek divine assistance, care for one another and live according to the highest aspirations for all of us.”

While the program said that Imam Mohamed Magid of the All Dulles Area Muslim Society Center in Virginia was to recite the Muslim call to prayer, he instead uttered two Quranic verses.

One was Surah al-Hujurat (49:13), which Magid read in Arabic and translated as “Oh humankind, we have created you from a single male and female, Adam and Eve, and made you into nations and tribes and communities, that you may know each other.”

“And among the signs of God is the creation of heaven and earth and the variation in your languages, and your colors,” he added, quoting from Surah ar-Rum (30:22).

Reading from the Episcopal Church’s Book of Common Prayer, the cathedral’s Dean Randy Hollerith spoke of harmony in his opening prayer:

“Look with compassion on the whole human family; take away the arrogance and hatred which infect our hearts; break down the walls that separate us; unite us in bonds of love; and work through our struggle and confusion to accomplish your purposes on earth.”

The clergy had entered the worship space in a colorful procession wearing robes, yarmulkes and clerical collars.

And prayers were mixed with patriotism as the congregation sang “My Country, ‘Tis of Thee,” the national anthem and “America the Beautiful.”

When Marlana VanHoose, a blind singer who has sung the national anthem at the NBA Finals, concluded her rendition of “How Great Thou Art,” some members of the audience gave her a standing ovation, followed by first lady Melania Trump, and then her husband.

Sikh, Buddhist and Baha’i speakers prayed for the vulnerable, the unemployed, and refugees. Pastor Ramiro Pena, a Baptist minister from Waco, Texas, asked the congregation to pray the Lord’s Prayer, “each in our own language.”

More than half a dozen evangelical speakers were included, and some added Jesus’ name to the written text.

“May the power of God’s word be our source as well as our shield wherever we walk today,” former Southern Baptist Convention President Ronnie Floyd said before reciting Psalm 23 (“The Lord is my shepherd”). Cissie Graham Lynch, the granddaughter of Billy Graham, added “the prince of peace, the king of kings and the lord of lords” to her prayer for peace.

The 2017 National Prayer Service had been a subject of controversy similar to the political one that preceded Trump’s swearing-in at the Capitol. In dueling commentaries, the past and present deans of the neo-Gothic church disagreed about whether the church that calls itself “A House of Prayer for All People” should open its doors to the 45th president and have its choir sing at Friday’s inauguration ceremony.

“It is simply inappropriate to use a precious institution such as Washington National Cathedral to suggest that the church bestows its blessing on a leader so obviously beyond the pale of Christian thought,” the former cathedral dean, the Rev. Gary Hall, wrote in an RNS commentary. “We cannot use the words, symbols and images of our faith to provide a religious gloss to an autocrat.” 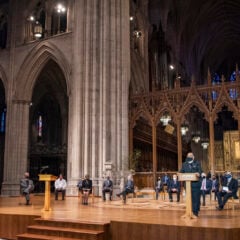 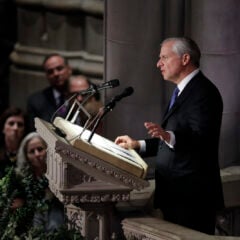