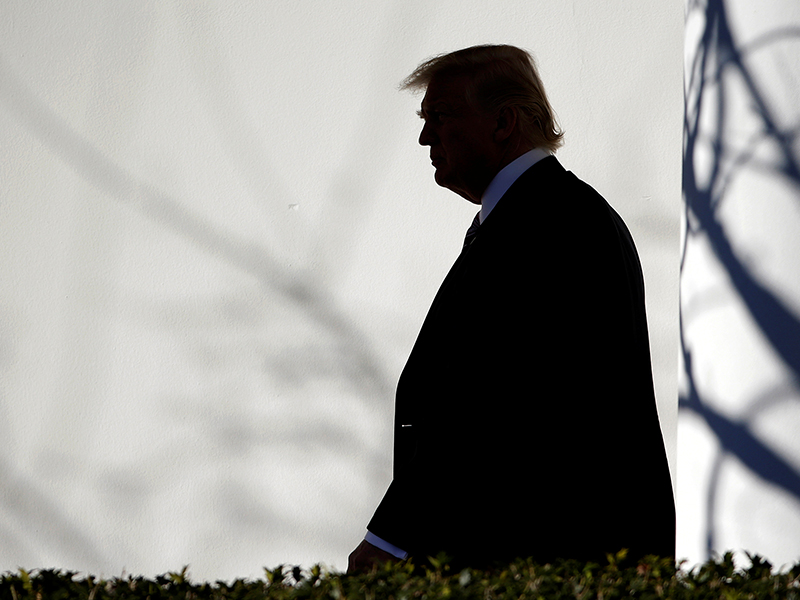 President Trump walks through the colonnade to the Oval Office after returning to the White House in Washington on Jan. 26, 2017. Photo courtesy of Reuters/Joshua Roberts
January 27, 2017
David Gibson

(RNS) In a departure from past practice, President Trump’s statement on Friday (Jan. 27) marking International Holocaust Remembrance Day does not say anything about the deaths of six million Jews — a lapse the head of the Anti-Defamation League called “puzzling and troubling.”

The White House statement with Trump’s remarks “misses that it was six million Jews who perished, not just 'innocent people,’” tweeted Jonathan Greenblatt, national director of the ADL shortly after the comments were released.

“Puzzling and troubling” that it “has no mention of Jews,” Greenblatt added in a follow-up tweet.

"How can you forget, Mr. President, that six million Jews were murdered because they were Jews?" Goldstein said.

"You chose the vague phrase 'innocent people.' They were Jews, Mr. President. On International Holocaust Remembrance Day, you forget the Jews, and later today you plan to issue new executive orders persecuting refugees and immigrants. Have you no decency?"

International Holocaust Remembrance Day was established by the United Nations in 2005 to commemorate the deaths of the six million Jews as well as an estimated two million Roma and thousands of disabled and gay people at the hands of the Nazis.

A separate Holocaust Remembrance Day was established by Israel in the 1950s to mark the Jewish losses in particular, a day which is also traditionally marked by an American presidential proclamation.

But Greenblatt noted that both Republican and Democratic presidents — including all of Obama’s statements on the occasion — always clearly highlighted the centrality of the genocide of the Jewish people on International Holocaust Remembrance Day.

In the brief, three-paragraph statement, Trump says that "It is with a heavy heart and somber mind that we remember and honor the victims, survivors, heroes of the Holocaust. It is impossible to fully fathom the depravity and horror inflicted on innocent people by Nazi terror."

“Yet, we know that in the darkest hours of humanity, light shines the brightest.‎ As we remember those who died, we are deeply grateful to those who risked their lives to save the innocent," he continued, again referring only to "the innocent."

“In the name of the perished, I pledge to do everything in my power throughout my Presidency, and my life, to ensure that the forces of evil never again defeat the powers of good," he concluded. "Together, we will make love and tolerance prevalent throughout the world."

That generic phrasing contrasts considerably with Obama's fuller statements on the memorial day, which always spoke about the sufferings of the Jewish people, even though Trump has consistently portrayed Obama as a foe of the Jews and Israel.

He has also been criticized for failing to call out virulent anti-Semitism among some of his supporters.

Twitter has become an easy channel for attacking Jews, and Greenblatt was immediately subject to numerous ugly responses.