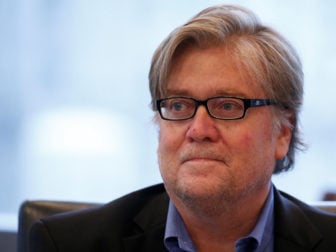 CEO of Republican presidential nominee Donald Trump campaign Stephen Bannon is pictured during a meeting at Trump Tower in the Manhattan borough of New York, on August 20, 2016. Photo courtesy of Reuters/Carlo Allegri/File Photo

Steve Bannon must be enjoying this. The designated head of strategy in the Trump White House has got the Jews fighting with each other.

After Bannon’s appointment was announced Sunday, the ADL, the Religious Action Center of Reform Judaism (RAC), and a host of Jewish commentators (including my RNS colleague Jeffrey Salkin) raised their voices in protest.

The impresario of the alt-right, they said, should not be working down the hall from the president of the United States. In RAC’s words, “[B]oth in his roles as editor of the Breitbart website and as a strategist in the Trump campaign, Mr. Bannon was responsible for the advancement of ideologies antithetical to our nation, including anti-Semitism, misogyny, racism and Islamophobia.”

Now come Bannon’s Jewish defenders, including Morton Klein of the Zionist Organization of America, Bernie Marcus of the Republican  Jewish Coalition, and Alan Dershowitz. “He’s no anti-Semite,” they insist — though there’s some smoke there. “And he’s a great friend of Israel.”

In other words, the Bannon appointment has opened a new chapter in the struggle between the ultra-nationalist Jewish right and the Jewish mainstream — the 76 percent of American Jews, mostly of the liberal, non-Orthodox, non-pro-Netanyahu persuasion, who did not vote for Donald J. Trump.

Did I mention that casino mogul Sheldon Adelson, who declined to support Trump’s presidential candidacy, has  joined the Trump inaugural team? And that Frank Gaffney — who with Pamela Geller orchestrated the anti-Ground Zero Mosque campaign — has been advising the Trump transition team? Or maybe not.

In any event, what’s going on here is not hard to discern.

There is a certain affinity between the white nationalism of the alt-right and the Jewish nationalism of the Zionist right. Steve Bannon’s strategy is to use it to foster an anti-Muslim presidency. And if that means dividing the Jews, so much the better.