In 2015 Time magazine ran a story by Jon Birger called “What Two Religions Tell Us About the Modern Dating Crisis,” arguing that a widening gender lopsidedness among men and women in Utah had made it nearly impossible for Mormon women to find a husband.

Birger, the author of Date-onomics, claimed this had resulted in a state of desperate competition among young Mormon women:

Mormon men have become much more demanding about women’s looks, which in turn has made women obsessed with standing out from the competition. One consequence: A culture of plastic surgery has taken root among Mormon women.

“I have seen more outrageous boob jobs and facial plastic surgery in Utah than almost anywhere in the country—especially among Mormon women,” said Bowman. “They may claim chastity as a virtue overall, but that’s not stopping anyone from getting a set of double-Ds.”

The article presented a string of circumstantial evidence to support the claim that Mormon women are leading the pack in the number who have cosmetic surgery. For example, Salt Lake City had 2.5 times the number of plastic surgeons per capita than was typical for a city of its size, according to Forbes magazine; it also had a high rate of Internet searches for people looking to get breast augmentations.

I personally found the claim believable, especially as the article slipped it in after presenting legitimate sociological research by Ryan Cragun and Rick Phillips, both responsible scholars whose work I trust. Ryan and Rick are correct about the gender lopsidedness of the Mormon dating scene, as explained in this post from 2015. Mormon women are at a significant disadvantage in the dating scene, numbers-wise, especially in Utah.

And the plastic surgery claim (which did not originate with Ryan and Rick) I believed only because I’d driven many times along I-15 in Utah. Anyone who does that and sees the billboards for one cosmetic surgery procedure after another might conclude that there’s something a little funky about Mormons and plastic surgery. So many advertisements for bigger boobs, younger faces, flatter stomachs . . . and most seemed directed at women.

Curious about whether such anecdotal evidence would bear out statistically, I added a question about cosmetic surgery to The Next Mormons survey, a nationally representative sample of 1155 current Mormons.

The results were quite ordinary and nonspectacular: Mormons as a whole have almost the exact same rate of self-reported plastic surgery procedures as people in the general population, as measured in a 2016 Pew survey. It’s three-tenths of a point higher, which is not statistically significant.

Among Mormon women, it’s even lower than for women nationally. 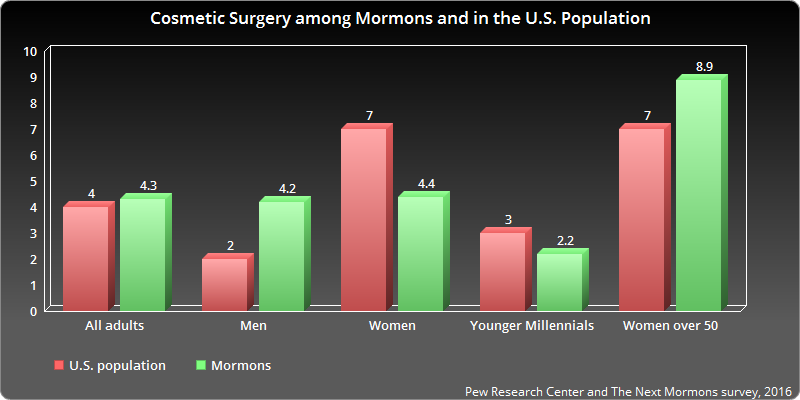 So why all the I-15 billboards? Why the Internet searches? And why was I so ready to believe that Mormon women were more likely – even far more likely – than other U.S. women to get cosmetic surgery?

With regard to the first two questions, it’s good to remind ourselves that just because a city becomes a medical mecca for something doesn’t mean that it’s always local residents who are taking advantage of it. In this article by Salt Lake City plastic surgeon York Jay Yates, he estimates that a fifth of his business is from out-of-staters who come to SLC because all the competition among doctors there has driven down prices. Whereas breast augmentation apparently costs between $6,000 and $10,000 elsewhere, the cost in Utah is only about $4,000. (For the record, he says he does see a lot of Mormon clients at his practice, especially young mothers who would like to get their bodies back after childbearing is over.)

And for the last issue – the fact that I, and many others, found it very plausible that Mormon women might have had higher rates of cosmetic surgery than average – I think we were ready to believe it because it feels true. Sexism is alive and well in Mormon culture, and there is definitely a certain Disneyfied “look” to the Mormon feminine ideal. For example, when I saw the “primary colors” photo of the incoming Primary general presidency last year, my first thought was . . . OK, my first thought, thanks to an immediate and immensely clever Twitter meme, was actually, “Wow, they look like Power Rangers!” But my second thought was, “Wow, they all look exactly alike.” And they did. 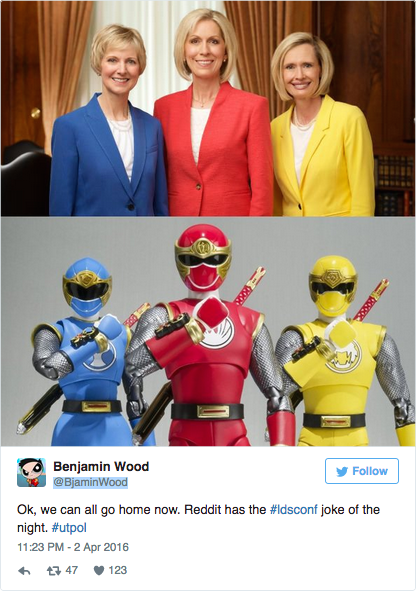 But statistically, it’s highly unlikely that this slim, blond look was achieved through cosmetic surgery. Let me say it again: Mormon women overall are no more or less likely to have had cosmetic surgery than the national average. And young Mormon women – the demographic that the Time article claimed was having cosmetic procedures in droves in order to snag a husband – are actually less likely than other women their age to do so.

So let’s be careful about making broad, sweeping assumptions based on anecdotal and circumstantial evidence. The numbers don’t always back it up.