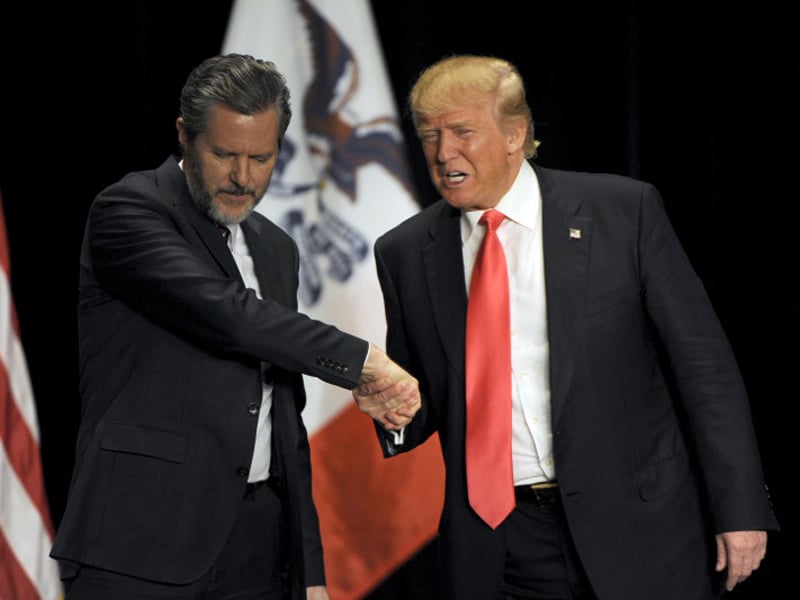 (RNS) President Trump will give the commencement address this spring at Liberty University, the university has confirmed.

"I look forward to speaking to this amazing group of students on such a momentous occasion," Trump told CBN News, which first broke the news of the commencement address Wednesday morning (March 22).

"Our children truly are the future and I look forward to celebrating the success of this graduating class as well as sharing lessons as they embark on their next chapter full of hope, faith, optimism, and a passion for life."

The announcement follows the news Vice President Mike Pence will speak at commencement at the University of Notre Dame.

The May 13 speech at Liberty's football stadium in Lynchburg, Va., will be Trump's first commencement address as president, but it won't be his first at Liberty, which describes itself as the largest Christian university in the world.

The then-presidential candidate spoke last year at the university's Convocation, promising, "I will protect Christians," and famously stumbling over a reference to "Two Corinthians."

Late in the campaign, both Pence and Faith & Freedom Coalition head Ralph Reed made the case for Trump in separate appearances at Liberty's Convocation after the release of video of the candidate making lewd remarks.

Liberty University President Jerry Falwell Jr. was one of Trump's most outspoken evangelical Christian supporters during the campaign and since has taken a role heading a White House task force on reforming higher education. The two reportedly have become good friends, with the Falwell family paying a purely social visit to the White House this past Thursday, according to David Brody of CBN News.

"It is a tremendous honor and privilege for any university to host a sitting U.S. President, and we are incredibly grateful to have President Trump be a part of this historic day," Falwell said in a written statement.

"Liberty has always been proud to provide its students with the opportunity to hear from successful professionals, including athletes, business leaders, ministers, entertainers, and politicians, regardless of their political or theological persuasion," the statement continued.

"This May, Liberty students will have the honor of hearing from a man who has succeeded in business and in politics, defying conventional wisdom to become the 45th President of the United States as a champion of the average American citizen, including many who felt forgotten and neglected by the establishment."

The school's association with Trump hasn't been without controversy: A group of students calling themselves Liberty United Against Trump spoke out against Falwell’s endorsement of the president, and Liberty board member Mark DeMoss resigned his position over it.

But, in giving Liberty's commencement speech, Brody said in breaking the news Wednesday, Trump "is again showing that he has not forgotten evangelicals since he's been president."

The network pointed to Trump's appointment of Neil Gorsuch to the Supreme Court, his reinstatement of a rule banning U.S.-funded groups around the world from discussing abortion and his plan to replace the Affordable Care Act. All are issues important to the evangelical Christians who overwhelmingly voted for the president.

The Trump administration also has turned the spotlight on CBN, the Christian Broadcasting Network founded by Pat Robertson. The administration called on CBN's reporter early in its first press briefing, and the president sat down with Brody for his third one-on-one interview in office.