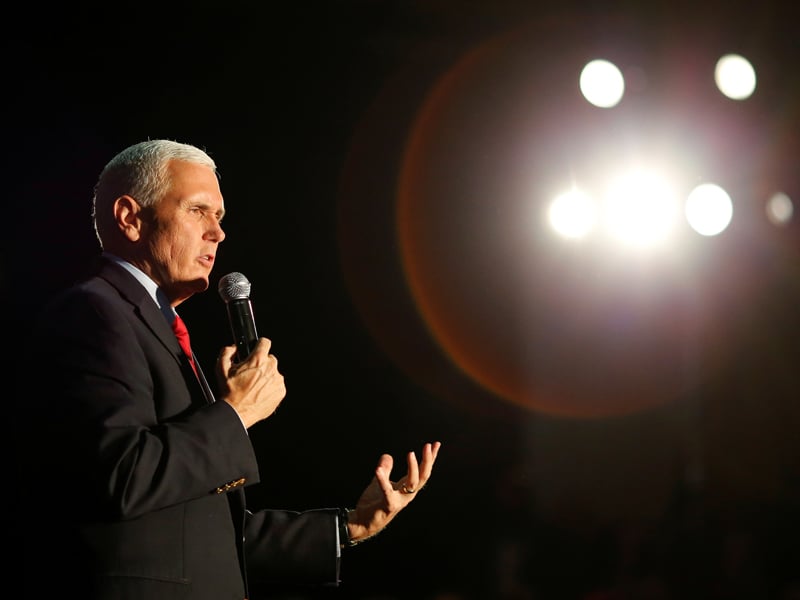 “It’s not about condemning what is said and done. It’s about believing in grace and forgiveness,” Pence said at the Lynchburg, Va., school, headed by prominent Christian conservative and Trump backer Jerry Falwell Jr.

Pence's Convocation speech, in which he freely shared his testimony as an evangelical Christian, comes two days after Faith & Freedom Coalition leader Ralph Reed laid out the evangelical case for Trump at the largest weekly gathering of Christian students in North America.

Pence touched on many of the same issues Reed had, including the Republican ticket's opposition to abortion and Trump's pledges to appoint conservative Supreme Court justices and revisit the Iran nuclear deal.

"Men and women of faith cannot choose to stand idly by in this great national debate," Pence said.

On Monday, the vice presidential candidate had spoken out for the first time about Trump’s remarks about an attempted affair with a married woman and about grabbing women by their genitals.

A number of Republicans rescinded their support for Trump after that video emerged, with some even suggesting Pence replace him on the ticket.

A wave of repudiation followed from evangelical Christians, including Albert Mohler, president of The Southern Baptist Theological Seminary; theologian Wayne Grudem, who previously had called Trump a "good candidate with flaws"; and a member of Trump's own evangelical advisory board, Pastor James MacDonald of Harvest Bible Chapel in suburban Chicago.

RELATED: 10 conservative Christians who are not supporting Trump

Yet others -- like Falwell and Reed -- doubled down in their support of Trump.

James Dobson, the founder of Focus on the Family and Family Life Today, also stood by his endorsement of the Republican nominee, despite having condemned Hillary Clinton's husband, former President Bill Clinton, for his affair with then-White House intern Monica Lewinsky.

In a statement released Tuesday, Dobson quoted Scripture -- "Let him who is without sin cast the first stone" -- and said he was "more concerned about America’s future than Donald Trump’s past."

"To my knowledge, Donald Trump has never abused women physically or had oral sex in the Oval Office with a vulnerable intern. Nor has he committed perjury by lying to Congress for many hours. Clinton, on the other hand, lost his license to practice law for that criminal act. Trump hasn’t been impeached by Congress for his lies. Donald Trump hasn’t vetoed bills that would have outlawed the procedure known as partial-birth abortion. Bill Clinton alone is responsible for the brains being sucked out of unanesthetized babies during delivery. That naziesque procedure continued for years until the Supreme Court declared it illegal. Donald Trump is pro-life. Clinton and his wife disrespect the Constitution of the United States, although Trump has promised to protect it, especially the First Amendment. Shall I go on?"

Pence said Wednesday that his evangelical Christian faith teaches him “we all fall short” and calls believers to “forgive even as we have been forgiven” -- and that his running mate showed "humility" in his apology during the second presidential debate against Democratic nominee Hillary Clinton.

But the vice presidential nominee and Indiana governor seemed less forgiving of Clinton, demanding an apology for a 2011 email exchange made public by WikiLeaks the night before.

In the emails, Clinton campaign spokeswoman Jennifer Palmieri reportedly wrote that conservatives chose the Catholic faith because it is the “most socially acceptable politically conservative religion. Their rich friends wouldn’t understand if they become evangelicals.”

Clinton opponents have denounced those comments and others that emerged from the leaked emails.

“If only on behalf of her Catholic running mate, Hillary Clinton should denounce those bigoted, anti-Catholic, anti-evangelical remarks, and her campaign staff should apologize to people of faith and do it now.”

Trump's poll numbers have been flagging since the release of the video -- a new Reuters/Ipsos opinion poll of likely voter has him trailing Clinton by 8 points -- and shoring up the Republican party's white evangelical base is seen as critical to his chances for success in next month's election.