This post was updated on Oct. 11 and again on Nov. 7, 2016, to add the names of several more prominent figures who have come out against voting for the Republican candidate.

(RNS) Donald Trump may have met with hundreds of conservative Christian leaders, mostly evangelicals, in New York on Tuesday, June 21, but not all Christians have lined up behind him.

Johnnie Moore — national spokesperson for My Faith Votes, one of the groups that organized the meeting — said beforehand he had seen “a real consolidation of evangelical support” for the GOP presumptive presidential candidate. But here are several Christian leaders who have made less-than-enthusiastic statements about the businessman-turned-reality TV star-turned candidate.

Perhaps no evangelical leader has been more outspoken in opposition to Trump than Russell Moore, president of the Southern Baptist Convention’s Ethics & Religious Liberty Commission. In a single weekend, Moore penned an op-ed in The New York Times and made an appearance on “Face the Nation,” in which he called Trump’s campaign “reality television moral sewage.”

Trump’s retort on Twitter called Moore “a terrible representative of Evangelicals and all of the good they stand for. A nasty guy with no heart!”

Moore has since changed the bio on his Twitter profile to reflect the jab: “terrible representative of evangelical Christianity, due to nastiness.”

A professor of biblical studies at Boyce College, Denny Burk blogged in March that though Trump has said he would appoint conservative Supreme Court justices, it was unclear what kind of justices he actually would choose; he does not seem to understand the pro-life position; and his statements supporting torture present a “real threat to our constitutional order.”

“I am not joking or being hyperbolic when I say that he is a Mussolini-in-waiting,” Burk wrote. “He must never be allowed near the Oval Office. Ever.” 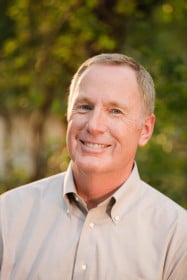 “I’m a pastor. I don’t endorse candidates or place bumper stickers on my car. But I am protective of the Christian faith. If a public personality calls on Christ one day and calls someone a “bimbo” the next, is something not awry? And to do so, not once, but repeatedly? Unrepentantly? Unapologetically? Can we not expect a tone that would set a good example for our children? We stand against bullying in schools. Shouldn’t we do the same in presidential politics?”

The pastor of Anacostia River Church and council member of The Gospel Coalition has called Trump a racist and many of the positions both Trump and Clinton have taken “evil.”

In a blog post in June titled “Can We Talk? Or, Why I Think A Trump Presidency Is Intolerable Even Though You Might Not Agree,” Thabiti Anyabwile wrote: “It seems to me, it’s past time Christians with minds bound by the word of God forsake party politics for party politics sake.

“If this election proves anything, it proves there remains among Christian people a lot of uncritical allegiance to the parties of men and even some idolizing of them,” Anyabwile wrote.

And this was after he published a guest post by Nick Rodriguez, a leader at his church, that asked Christian leaders to vote for Clinton.

The conservative blogger behind The Resurgent told Katie Couric in May, “If the Republican Party wants to go in (Trump’s) direction, I guess I’m not a Republican anymore.”

Erick Erickson previously had said he would support Trump if he became the party’s nominee. Then in February he wrote on his website, The Resurgent, “I Will Not Vote For Donald Trump. Ever.“

“Donald Trump has had no ‘road to Damascus’ conversion. He only wants to date the preacher’s daughter,” Erickson wrote.

Warren Throckmorton posted a statement Monday (June 20) on his Patheos blog from Robby George, McCormick Professor of Jurisprudence at Princeton University, who declined to attend Tuesday’s meeting. George is Catholic.

“I have been a severe critic of Mr. Trump and there is nothing he could say at a meeting in which he is courting conservatives that would alter my low opinion of him. I trust that I do not need to go into detail about the words and actions that have caused me to form that opinion. Perhaps the only politician in America of whom I have an even lower opinion is Hillary Clinton, so I certainly understand why some are urging us to hold our noses and support for Mr. Trump. But I fear that he will, in the end, bring disgrace upon those individuals and organizations who publicly embrace him.”

Earlier that month, he tweeted, “Good people, reject (Clinton) but don’t associate yourself with Trump. He will disgrace & taint all who snuggle up to him.”

“For conservative evangelicals like me, the 2016 election really is a choice between two evils,” said Alan Noble, editor of the website Christ and Pop Culture, in a June article in Vox.

In his post, in which he advised evangelicals to abstain from voting for president and focus instead on congressional and local and state elections, Noble wrote that voting for Trump would undermine “decades of the religious right’s insistence that character matters in politicians.”

He called the candidate “a deceptive, infantile, racist demagogue with no political principles aside from his own self-interest.”

He also pointed out Trump’s comments that he does not ask for forgiveness, saying, “Any man who is so unaware of his own depravity that he cannot recognize his need for forgiveness is incapable of justly leading any country.

“There simply is no way around this fact for evangelicals.”

That’s because, he told Yahoo! News, “I think we know enough about Donald Trump to know that a Christian response should be prayer for him, but also a prophetic witness about what is true.”

“We … boggle at how some Christians and conservatives still defend Donald Trump,” Owen Strachan wrote in a post for the Center for Public Theology at Midwestern Seminary, where he is associate professor of Christian theology and director of the Center for Theological and Cultural Engagement.

That post came after the release of the 2005 recording. But it’s a case the president of the Council of Biblical Manhood and Womanhood has made against Trump in several previous posts.

Remarks describing attempted affairs and assaults on women like the ones Trump was caught making on a live mic during a recording of “Access Hollywood” must be condemned and spoken against, Strachan said. And enthusiastic support for a man whose left a string of broken homes behind him could put evangelicals “in grave danger of hypocrisy,” he added.

That left him wondering in August if, “in our efforts to engage our country politically, we have become more Machiavellian and less Pauline.”

“In other words, we’re willing to do almost anything to elect officials, preserve rights, and gain seats on the Supreme Court,” he said.

“There is no world in which I would vote for Bernie Sanders. But I would consider it before I would ever consider voting for Donald Trump,” Matthew Lee Anderson wrote in February for Mere Orthodoxy.

Anderson looks back on the sentiment as “almost endearing” now, he wrote on Oct. 6.

To him, it seems evangelicals are despairing and will vote for anybody who isn’t Clinton. But he, at least, hopes that won’t be for Trump. (He instead has suggested Evan McMullin, the former chief policy director for the House Republican Conference in the U.S. House of Representatives and a former CIA operations officer.)

“The story on November 9th could be that the constituency which claims the gospel as its leading identifier finally became fed up with Trump’s antics and opted to vote for a third party instead,” he said.

Trillia Newbell, director of community outreach for the Ethics & Religious Liberty Commission for the Southern Baptist Convention, said she cried when a loved one shared he or she was supporting Trump for president. And those don’t appear to have been tears of joy.

“Actually in tears after seeing someone I love post that they are voting for Trump. I can take the Christian celebrities but friends are hard,” Newbell tweeted.

Like Strachan, she also denounced the now-infamous “Trump tape.” She also pointed out the nominee’s lack of remorse about his comments, urged her followers to think of sexual assault victims before sharing memes about them and encouraged occasionally logging off during the contentious election cycle.

I’m not one to encourage disengagement but I wonder if our minds & hearts are meant to be on the 24hr news cycle. I don’t think so #restwell

Both David French and his wife Nancy French have been outspoken in their opposition to Trump — and it’s cost them.

David French, senior fellow at the National Review Institute, has written about the online abuse he and his wife have received from Trump supporters, including “psyche-scarring” images left in comments or sent to them on social media. And bestselling author Nancy French has written about how Trump’s defenders on the religious right bring flashbacks of her own sexual assault.

“I’ve defended the unborn my entire career; he praises Planned Parenthood. I believe that marriage is a sacred covenant between husband and wife; he’s a serial adulterer. I believe America should lead the world in defense not just of its territorial integrity but also of civilization itself; he would retreat into glorified isolationism. I believe that free trade has made America more prosperous and enriched the lives of its citizens; he threatens to start ruinous economic conflicts. I believe that a core American value is that we can and must judge our citizens by the content of their character, not the color of their skin or their families’ roots; he attacks a federal judge because of his parents’ Mexican heritage.”

R. Albert Mohler Jr. called it a “crisis of conscience” for evangelicals. Or, more specifically, him: “The immediate and excruciating crisis has a name — Donald Trump,” Mohler wrote in the Washington Post.

The president of the Southern Baptist Theological Seminary in Louisville joined his fellow Southern Baptists Russell Moore and Trillia Newbell in calling on evangelical Christians to distance themselves from the Republican candidate after the “Trump tape” release. And yet, he said, those tapes didn’t reveal anything about Trump that wasn’t already clear.

“Married three times, flaunting Christian sexual mores, building his fortune and his persona on the Playboy lifestyle, under any normal circumstances Trump would be the realization of evangelical nightmares, not the carrier of evangelical hopes,” Mohler said.

RELATED: Religious freedom at stake in this election, but not in the way evangelicals think

Deborah Fikes not only doesn’t support Trump, she has thrown her support behind his Democratic opponent, Hillary Clinton.

Fikes, a former executive adviser of the World Evangelical Alliance, wrote in the New York Times that it was the first time she’d felt compelled to reject evangelicalism’s “unquestioned political alignment with the G.O.P.” In her work with Christians around the world, though, she came to realize their “pro-life” and “pro-family” views didn’t look much like Trump’s — or the Republican party’s.

In fact, she said, “Evangelicals from all regions, but particularly in Africa, consider Hillary Clinton a ‘sister in Christ’ and someone who lives out the Golden Rule in all the good she has done for women and children. Many affectionately call her ‘Sister Hillary.'”