(RNS) I’m wearing hats most of the time, these days. Some cap wearers link their choices to faith or fashion. For me, it’s mostly about my brain cancer.

I’m about five months into my time with glioblastoma, aka GBM. It’s a cancer with a median survival of about 15 months. Which means half of the patients live shorter and half somewhat longer.

What about me? Hard to say. But my hats are a no-kidding try at pushing to the long side. With an internal nod to a history of those traditions.

Every two days, I have to shave my head smooth and have my wife stick on a new set of electrodes that produce the electric field that I can’t actually feel.

The science part of the explanation is this:

There is a theory that an electrical field in my brain will make it hard for cancer cells to divide.

A few of the molecules inside the cancer cells that are key to the split are ions. The electric field pushes those molecules out of alignment, which makes tumor growth less likely.

Optune is the name of the gadget I wear. It ain’t a cure, but there’s some data that indicates that it helps.

The headful of stick-um electrodes looks odd. So I wear hats when I leave the house.

Some are baseball-style, some more fedora-ish. All of them carry the same slogan, hand-painted by my wife: “Cancer sucks.” Which is straight-ahead correct.

I knew when I started with my caps that I was leaning into a very old religious and even social tradition. In the U.S., most men wore toppers daily until the fade started when Eisenhower was president in the 1950s. Nowadays, men who wear hats are mostly into unusual American fashion.

The Jewish tradition of keeping heads covered goes back a couple of thousand years. But not directly to the Torah, far as I can tell.

In Temple days, the priests covered their heads, however. And the Talmud has stories about men who wore head covers to remind them to obey God.

A woman is told by astrologers that her son would become a thief. She requires the boy to wear a head cover at all times, to remind him that God is up there and paying attention. One day, he’s sitting under a palm tree and the wind blows the cover off. Temptation pushes him up the tree to steal and eat fruit.

That’s such a popular tale that Orthodox Jews wear some kind of cap pretty much any time they’re not in the shower. From small skullcap yarmulkes to gigantic fur hats, the visible covers have a huge range. (My current caps, I will admit, aren’t specifically like any of those versions.)

Christianity, on the other hand, is more anti-hat for men. With the exception of some clergy, taking the hat off is the Christian sign of a man’s respect for Jesus. There’s even a New Testament command in one of Paul’s letters to the Corinthians:

To which I respond: What the what? There are odd gender combinations of commands in many faiths. But this one is not my cuppa at all.

Other religions have their own ideas about head coverings. Because Muhammad supposedly kept his head covered, many Muslim men follow suit. Sikh men who follow their faith’s command wear turbans. Buddhists and Hindus aren’t big on head coverings with religious connection.

So where am I? My agnostic interest in Jewish tradition goes back to my childhood. I wore yarmulkes to temple services, Passover seders and a few special events. But I never felt pressure to keep the cover on at other times. If the Almighty cared, the message never made it to me.

And yet now — and for just about the rest of my life — I’m likely to never have a bare head in public. I’m not assuming God will give me credit for my own caps atop the electrodes that cover only a bit more than a standard yarmulke. But if there’s a plus beyond the technology, I won’t turn it down. I hope He gets a charge out of it. 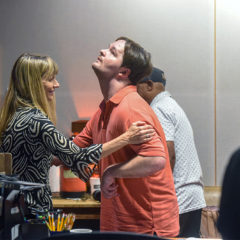 Christianity
Luke Putney testifies to the healing power of music, helping others