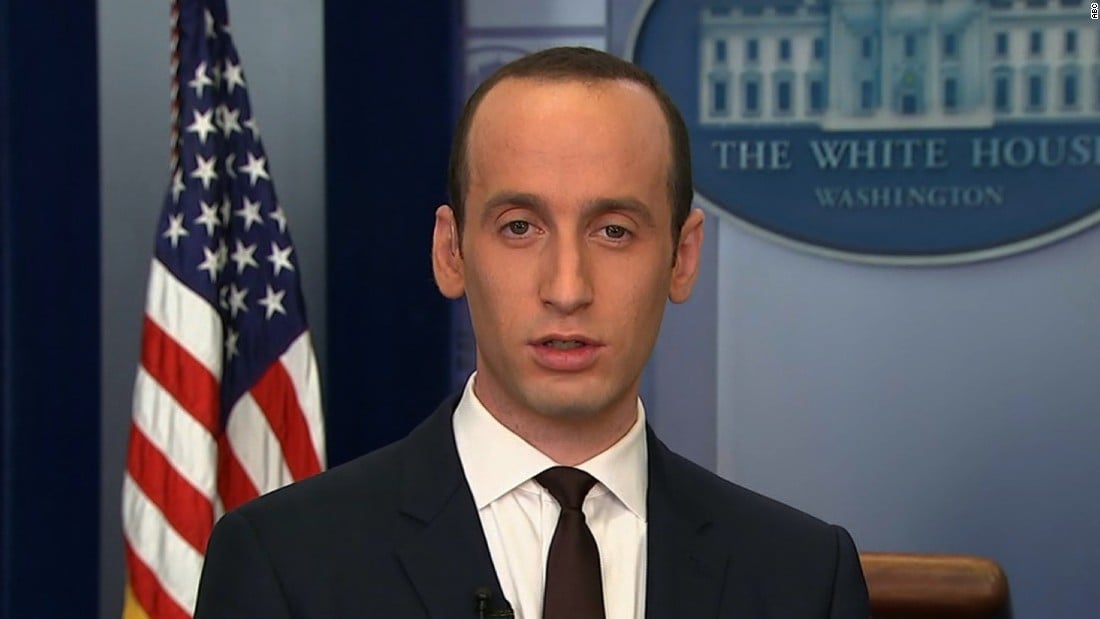 (RNS) — It is the week following Tisha B’Av, the ninth of Av, the fast day that commemorates the destruction of both the First and Second Temples — by the Babylonians and Romans, respectively.

On that night, I was at the Kotel (the Western Wall) in Jerusalem. I heard the doleful chanting of Eicha, the Book of Lamentations. I heard pious Jews weeping over those epochal losses.

Their Hebrew refrain: mipnei chataeinu galinu me-artzeinu. “Because of our sins, we were exiled from our land.”

It’s all our fault.

That is what some Jews are saying about Stephen Miller, the 31-year-old senior White House adviser and chief campaign speechwriter for Donald Trump.

Miller is now the second-most-scrutinized Jew in the current administration (after Jared Kushner, of course).

He is a Jew who has espoused a radical right-wing agenda, which puts him outside the political and moral pale of the majority of American Jews.

He is an anomaly. Which prompts us to ask: Where did Stephen Miller “come from”?

Miller grew up in Santa Monica, Calif. He received his Jewish education at two local Reform synagogues. His father was a Jewish communal leader and generous to various Jewish causes.

And yet, according to an article in Vanity Fair, as a young teenager, Stephen Miller reportedly ended a friendship — simply because the friend was Latino.

From there, it was the express lane to embracing an extreme right-wing — even white-nationalist — political and social agenda.

At Duke University, Miller became friends with Richard Spencer, who would become the ideological powerhouse of the alt-right movement.

Miller's right-wing views would help him attain positions as a spokesperson for prominent Republicans Michele Bachmann and John Shadegg.

Miller, along with Steve Bannon, is reputed to be the driving force behind Trump’s desired Muslim ban.

He has minimized the connection between Emma Lazarus’ iconic poem "The New Colossus," with its compassion for beleaguered immigrants, and the Statue of Liberty upon which it appears.

In a clash with CNN's Jim Acosta over the White House's preferred immigration policy, he lambasted the reporter as a "cosmopolitan,” a term that has anti-Semitic connotations.

How could this have happened? Miller is the product of a Reform Jewish education. He should have imbibed Reform Judaism’s progressive values, shouldn't he?

One of Miller's childhood rabbis is my old friend Jeffrey Marx, of the Santa Monica Synagogue. He is a great rabbi.

This is what my colleague said about Miller: “We did our best here to teach Stephen the ethical standards of Judaism.”

So, let's talk about Jewish education.

For too many American Jews, the goal of Jewish education is to teach our kids to decode Hebrew so they can be prepared for celebrating bar and bat mitzvah.

In the words of the singer Peggy Lee: Is that all there is?

No, it isn't. And many Jewish parents know it.

They know that they want their kids to learn the Jewish values — compassion, justice, love of the stranger, what it means to be created in God's image — that are imbedded in those prayer texts.

Here is the problem.

We don't have the time.

Many kids enroll in religious school in fourth grade, and far too many of them drop out after bar and bat mitzvah.

Let's assume that he or she attends 30 weeks of classes per year — at, say, three hours a week.

Assuming 12 waking hours a day, that amounts to one month of Jewish education.

Most of it taking place before a kid can think abstractly and with any kind of nuance about the complex issues that face Jews and the world.

Here is the paradox.

And yet, American Jews are learning about those values and teachings less and less.

Jewish values can only emerge out of what we would call a thick Jewish communal culture — where we have robust conversations about the role of Judaism in contemporary life; where we ask ourselves what the entire purpose of Jewish life should be.

Yes, religious school — however challenged that model might be.

And, also, and indispensably: the sacred conversations that happen around the family table, especially on Shabbat and holidays.

Which begs the question: How many Passover seders did Stephen Miller attend in his life, the ritual meal at which Jews retell the story of the Exodus and rededicate themselves to caring for the stranger?

And did he pay attention to anything deeper than the brisket?

(Rabbi Jeffrey K. Salkin is the spiritual leader of Temple Solel in Hollywood, Fla. He writes the “Martini Judaism” column for RNS. The views expressed in this opinion piece do not necessarily reflect those of Religion News Service)