(RNS) — When the Southern Baptist Ethics and Religious Liberty Commission and the evangelical Council on Biblical Manhood and Womanhood released their joint “Nashville Statement” on Tuesday (Aug. 29), they tipped their theological hand.

The statement aims to clarify conservative evangelical positions on same-sex relationships and transgender identity. These positions are not new, nor are they particularly clarifying. They simply restate, perhaps in a more concise form, the condemnations that conservative evangelicals already express in faith statements and denominational policies.

But there is something fresh happening in the Nashville Statement that caught my, and many others’, attention. An underlying theological principle that was perhaps somewhat covert or subtle previously is now being openly pressed. And this principle, I believe, is a key reason for the magnitude of the outrage that has occurred in the hours and days since the statement’s release. It strikes at the very heart of American Christianity’s current cultural transition.

Article 10 of the statement makes this principle plain:

WE AFFIRM that it is sinful to approve of homosexual immorality or transgenderism and that such approval constitutes an essential departure from Christian faithfulness and witness.

WE DENY that the approval of homosexual immorality or transgenderism is a matter of moral indifference about which otherwise faithful Christians should agree to disagree.

The affirmation that approving of same-sex relationships or transgender identity is sinful and an essential departure from the faith is stunning, precisely because the cultural transition in which many Christians find themselves has them opening up to different perspectives on these issues.

In other words, this article stridently widens the swath of those now targeted by conservative gatekeepers.

The word “essential” is key here, referring to the long-standing evangelical principle: “In essentials, unity; in nonessentials, liberty; in all things, charity.” To deny an essential aspect of Christian faith is, from an evangelical perspective, a total parting of spiritual ways. It is an occasion for the famed theological “farewell,” an automatic excommunication by doctrinal departure. It is, actually, damnable — the kind of thing that will get you an eternal life sentence in hell. One strains to see the charity in such a perspective, but I digress.

The denial is, perhaps, even more remarkable in how it circles back to remove all doubt about this sin of approval. It is, the drafters say, impossible for faithful Christians to hold differing positions on this matter; they cannot agree to disagree. As I observed more and more left-leaning Christian voices reacting to Article 10 on social media, I wondered if the drafters or signers would try to soften this statement or backpedal a bit. But Denny Burk, president of the Council on Biblical Manhood and Womanhood and key architect of the statement, doubled down Wednesday afternoon:

“Readers who perceive Article 10 as a line in the sand have rightly perceived what this declaration is about. Anyone who persistently rejects God’s revelation about sexual holiness and virtue is rejecting Christianity altogether, even if they claim otherwise. Or as the apostle Paul puts it, ‘For this is the will of God, your sanctification; that is, that you abstain from sexual immorality. … Consequently, he who rejects this is not rejecting man but the God who gives His Holy Spirit to you’ (1 Thess. 4:3-8). The stakes are higher than the revisionists want you to believe, and The Nashville Statement aims to clarify that. … The Nashville Statement leaves no room for such revisions nor does it leave ambiguity on the question.”

The unambiguous high stakes trumpeted by Burk and the statement effectively threaten LGBTQ people and their supporters with the ultimate consequence: hell. What does it say about conservative evangelicalism in this country if disagreement on this one matter eliminates the possibility of redemption? As many others have highlighted in the last two days, there has been no statement drawing a line in the sand about Christians who tacitly support President Trump’s sexually immoral comments and lifestyle choices. Nor have there been any statements excommunicating Christians who take Trump’s xenophobic positions on immigration and refugee resettlement. And where, we might ask, was the Charlottesville Statement clarifying the damnable status of conservative Christians who flirt with white supremacy?

Why should such Christians reside in a decidedly ambiguous, and entirely safe, gray area while, for the targets of the Nashville Statement, there is no ambiguity? It is black and white. And that is revealing.

The Trump era thus far has been revealing for conservative evangelicals in precisely that sense. And if the Nashville Statement doesn’t clarify much about evangelical positions on sexuality and gender issues, it certainly reveals much about the theological heartbeat that currently animates the American evangelical movement. A Christian salvation available only to those who agree in condemning and excluding LGBTQ people is in keeping with a commander in chief who demands the exclusion of transgender troops, refugees, immigrants. It is a strikingly Trumpian brand of redemption that saves by statements of division.

Sure, our country might be embroiled in a racial crisis and reeling from a natural disaster. But if the deep-seated theological agenda is exclusion, then the Nashville Statement is perfectly timed. What we desperately need in our nation is healing. What we will keep on getting from evangelicals, I fear, is a deeper wound, and a line in the sand that cuts like a knife.

(Zach Hoag is the author of “The Light Is Winning: Why Religion Just Might Bring Us Back to Life.” Find him writing at zhoag.com and follow him on Twitter @zhoag. The views expressed in this opinion piece do not necessarily reflect those of Religion News Service) 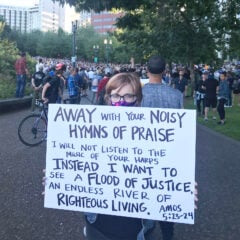