(RNS) — Over the past two decades, many Christians have made a dramatic public conversion to environmental causes.

In Protestant churches across the country, they have gone on carbon fasts, planted church vegetable gardens, and struck alliances with Native Americans and others to protect the country from the environmental harm caused by drilling, fracking, mining and building underground gas pipelines.

But despite widespread efforts to advance environmental awareness in churches and seminaries, a new study shows that two decades of advocacy have not made Christians any greener in their outlooks.

The study, a longitudinal look at Gallup’s annual surveys on the environment, reveals that Christians have not become more concerned about the environment, and in some cases have become less so.

Although the study is limited — it was not tailored to religious people but to Americans generally and it did not drill down into particular denominational affiliation — it suggests that the dangers of climate change may not be registering with church members.

“The idea was to see if attitudes have changed over time,” said David Konisky, a political scientist at Indiana University and the author of the study, which is to be published in a forthcoming issue of Environmental Politics.

“In fact, the trends move in the opposite direction. People’s concern over issues such as pollution, in the air, water or toxic waste, their concern about climate change and its urgency, those have all been declining over this time period studied.”

Konisky’s study examined Gallup environmental surveys during three years during the 1990s and then annually from 2005 to 2015. About 1,000 U.S. respondents each year were asked whether they worried about water, air, soil or toxic waste pollution, whether they see global warming as a threat, and whether they participate in the environmental movement.

The overall pattern that emerged is that concern about the environment has been flat over the past two decades, and in some cases declined. For example, more Christians prioritized economic growth over protecting the environment in 2015 than they did in 1990.

The study does not reflect the impact of “Laudato Si’: On Care for Our Common Home,” Pope Francis’ 2015 encyclical on the environment, which was published after the Gallup Poll’s 2015 survey — the last one examined in the study. (The Gallup surveys broke down Christianity into Catholics and Protestants but attitudes toward the environment were similar in both groups.)

Advocates working at the intersection of the environment and religion were sanguine about the study’s findings.

“This involves long-term change and that’s not going to happen in 10 or 20 years,” said Mary Evelyn Tucker, co-director of the Yale Forum on Religion and the Ecology. “All social movements have had pushback. That’s going to happen. But change will go forward.”

Tucker pointed to programs such as Yale Divinity School’s master’s degree in religion and ecology, which trains future ministers to view the environment as a critical component of faith formation.

But others questioned whether the Gallup surveys reliably reflect the concerns of religious people. For many evangelicals, words in the survey like “climate change” and “global warming” invoke pitched political and ideological battles. They may have been more responsive when asked about environmental stewardship — or, in the more common Christian parlance, “creation care.”

That’s the language evangelicals such as Richard Cizik, Rick Warren, and Joel Hunter have used to argue that Christians have a religious duty to be stewards of God’s creation.

Words matter when talking to evangelicals, said Emily Wirzba, a lobbyist with the Friends Committee on National Legislation, a Quaker organization.

“We did find that framing it as a moral issue or a faith and religious issue and using ‘creation care’ helps provide political cover and the support members of Congress need to be more vocal on the issue,” she said.

A waning concern on environmental issues may also have something to do with the massive public relations campaign developed by several industries, such as tobacco, gasoline and coal-burning power plants, to sow doubt and confusion about scientific data.

It’s possible that Christians’ lackluster responses to climate change are an indication that these disinformation campaigns were ultimately more successful than the sermons they may have heard in church, said Katharine Hayhoe, a climate scientist at Texas Tech University and an evangelical who works to convince Christians about the reality of global warming.

“We have to consider all the important factors that influenced the trajectory of people’s opinion,” Hayhoe said. “We can’t leave out the negative factors, especially when we know they exist and we know they work.”

For these evangelicals, partisanship trumps religious considerations when it comes to the environment.

“Religion is not a very powerful predictor and ideology is,” said Aaron McCright, a sociologist at Michigan State University who co-authored a similar 2014 study finding lower levels of environmental concern among Christians based on the General Social Survey.

All of which means political partisanship may have played a larger role in many respondents’ answers, McCright suggested.

For these more politically minded Christians, environmental awareness may be a much more difficult sell.

The lesson for environmentalists in all this?

“The political Christians are not changing and I do not expect them to change,” said Hayhoe. “They won’t change until the leadership tells them it’s OK to say this.” 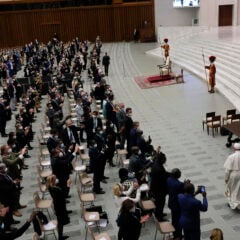