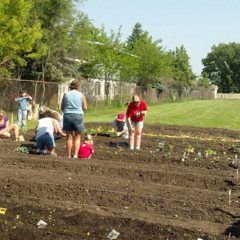 (RNS) The Rev. Morris G. Henderson wasn’t sure what do with a vacant city block of land behind his 31st Street Baptist Church in Richmond, Va. The church had purchased the plots, but didn’t have the funding to build a planned family life center.

Then, he had a vision.

“Why not build a garden and people can learn to be self-sufficient and we can grow food?” Henderson said.

With an 80-year-old congregant heading the project, the congregation planted its first garden in 2008: watermelons, tomatoes, okra, squash, strawberries and blueberries.

By the second year, even after the gardening chief had passed away, congregants were getting guidance from the Virginia Cooperative Extension; this year, the church has at least two dozen raised beds, with the bulk of the harvest used for the church’s Monday-Friday soup kitchen.

The nutrition program serves at least 70, rising to 250 people in the summer when kids don’t have access to school lunch programs, Henderson said. Extras are available for congregants, food program participants and the community, for a donation. A flower garden provides pollination for the plants and flowers for the sanctuary.

Henderson’s congregation is one of a growing number throughout the country that are raising fruits and vegetables for soup kitchens and food pantries in what are often called food justice programs; in some synagogues they’re known as mitzvah gardens.

The gardens serve a multifold purpose. In addition to providing fresh food to those who might not otherwise have access, the gardens are educational tools; they increase awareness of land sustainability; they teach congregants about farming and remind them of religious imperatives to care for the land. One of the largest is at Chicago’s KAM Isaiah Israel synagogue, with a food program that supports gardens in its own yard as well as in that of two churches just blocks away.

The food program began in 2009 when Robert Nevel, the synagogue’s social justice coordinator, and a group of volunteers ripped out much of the synagogue’s lawn to create the Star of David vegetable garden in the shape of a six-pointed Star of David, with produce grown in each 30-square-foot point.

The congregation has since planted a second vegetable garden and an herb garden on other sides of its 1923 building, which sits directly across the street from the Hyde Park home of the nation’s gardeners-in-chief, President and Michelle Obama.

In 2011, with a grant from the community group One Chicago, One Nation, KAM helped Kenwood United Church of Christ establish its garden, and last year assisted St. Paul and the Redeemer Episcopal Church in creating one.

“We think of all the gardens in the neighborhood as one farm for purposes of plant rotation and harvesting,” Nevel said. “Together, we remain a network for the harvesting and distribution of the food.”

The produce is distributed to six different hot-meal programs, four of them affiliated with houses of worship and all of them within a mile and a half of KAM, Nevel said.

“We are probably the sole source of fresh food for four or five months of the year for a significant number of people in Chicago,” Nevel says.

At Chicago’s Living Room Cafe, a nonprofit that provides dinners twice weekly and breakfast on weekends, chef Royal Green calls the produce a “big plus.”

“They’re saving us a lot of money; it’s fresh and it’s more nutritious” than canned goods that otherwise would be used, he said. 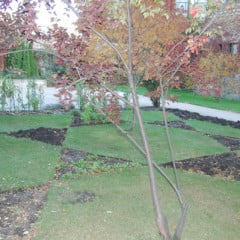 “Some of the key principles of Catholic social teaching speak to importance of caring for God’s creations,” she said, also noting that its food program deals with “proper use of the land, food distribution justice issues and human dignity issues all at once.”

The congregation, which donates its harvest through its own ministry for shut-ins, as well as to a local soup kitchen, food bank and a home for unwed mothers, more than doubled its garden from 1,300 square feet last year, which yielded 1,000 pounds of produce, to 3,000 square feet this year. The number of volunteers also has tripled from about a dozen to 35.

“It’s been an amazing experience,” says Anita Torok, the garden’s organizer. “Some like the spiritual solitude of seeing the plants grow and working with soil. Some like the family experience; a grandmother brings her grandchild and they hunt for the food to harvest. Some like the sense of purpose they’re involved with a good cause.”

Organizers at all the gardens say it’s not just congregants who volunteer to do the farming, but members of the larger community.

“The thing I feel most proud of about the garden is that a true marker and measure of a buy-in by our community is we have no fence around our garden. People watch it and keep us from being robbed blind,” Henderson, of Richmond, said. “The community has allowed us to keep our garden for the needy.”