Paul Simon, one of the most important singer-songwriters of our time, has announced his retirement from touring.

The road takes its toll on the life of a rock star. Paul Simon is 76 years old — an age at which many people would consider retiring. After a career that spans almost six decades, he has earned it.

I have spent many years thinking about Jewish rock performers.

Some use Judaism as a resource. That list would include the late Leonard Cohen, Matisyahu, Bob Dylan, his son in law Peter Himmelman.

For others, their Judaism is far more concealed.

A prime example of that would be Paul Simon. Simon told an NPR reporter, “I was raised to a degree, enough to be, you know, bar mitzvahed and have that much Jewish education, although I had no interest. None.”

In other words, Paul Simon was a typical Jew of his generation.

It’s not as if Paul Simon’s music had no religious content.

Early in their career, Simon and Garfunkel recorded several blatantly Christian songs, such as “Benedictus”  and “Go Tell It on the Mountain” and “Blessed,”  a musical rendition of a section of Jesus’ Sermon on the Mount.

Simon and Garfunkel would follow those up with “7 O’Clock News/Silent Night,”  the closing song of “Parsley, Sage, Rosemary and Thyme,” which juxtaposes the violence of the nightly news with the imagined peace of the night of Jesus’ birth.

Add to this list: a live concert recording of “Jesus Is The Answer.”

Then, there was “Getting Ready for Christmas Day” which is based on a famous 1941 sermon given by Reverend J.M. Gates of Mount Calvary Baptist Church in Atlanta:

From early in November to the last week of December

I got money matters weighing me down

Oh the music may be merry, but it’s only temporary

I know Santa Claus is coming to town.

As my father asked, after hearing the line “Jesus loves you more than you will know” in “Mrs. Robinson”: “What are two Jewish boys from Queens doing singing about Jesus?”

Yeah, what was up with that?

There was always far more Judaism – and Jewish references – in Paul Simon’s work than we had previously imagined – far more than his brief mention of his brief marriage to the late Carrie Fisher as “one and one half wandering Jews” in “Hearts and Bones.”

Taken as a whole, the entire first side and the first song on the second side comprise an overlooked piece of modern American Jewish literature.

Start with “Save the Life of My Child” – about a boy who threatens to jump off a roof.

Compare that song to “The Conversion of the Jews,” which is in the “Goodbye Columbus” collection by Philip Roth. A boy threatens to leap from the roof of a synagogue unless the rabbi and others affirm the possibility of Christianity’s truth claims. Did Paul Simon know about that parallel?

Move then to “Voices of Old People,” a recording of elderly Jews in conversation – recorded at various Jewish nursing homes in New York and Los Angeles.

The singer is “fakin’ it” about a relationship.

But, he’s also “fakin’ it” about his ability to escape the American Jewish immigrant past.

Prior to this lifetime, I surely was a tailor.

not really makin’ it …

It turns out that Paul Simon’s grandfather, also named Paul Simon, had immigrated to the United States from Galicia.

He was a tailor.

Paul Simon, the songwriter, was telling the truth: we are always our grandparents’ face and hands.

No other rock artist was as adept as he was in importing musical styles from all over the world. Gospel, reggae, zydeco, African music – all found a home in Paul Simon’s music. Perhaps Jesus was only incidental to his Christian-influenced material; perhaps it was just the musical styles that intrigued him.

But, still: you think he could have found at least a few places for, say, klezmer or Middle Eastern Jewish music?

(And, let’s face it: not every singer can equal Leonard Cohen’s re-statement of the Unetaneh Tokef in “Who By Fire?”)

But, if there is one song that would redeem Paul Simon as a “Jewish” composer, it is “Silent Eyes” which appears on the album “Still Crazy After All These Years.”

Make her bed of stones

No one will comfort her

And she calls my name

In the desert sun

And we shall all be called as witnesses

Each and every one

To stand before the eyes of God

And speak what was done.

“Silent Eyes” is a masterful evocation of Jewish text and sensibilities.

In fact, if I am at the Western Wall next Tisha B’Av, I will softly sing that song in the presence of the ancient, ruined stones.

Have a great retirement, Paul. You were always far more Jewish than you thought.

And, yes – yasher koach on a great career. 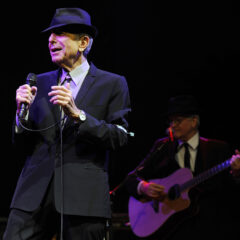 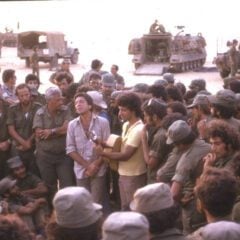