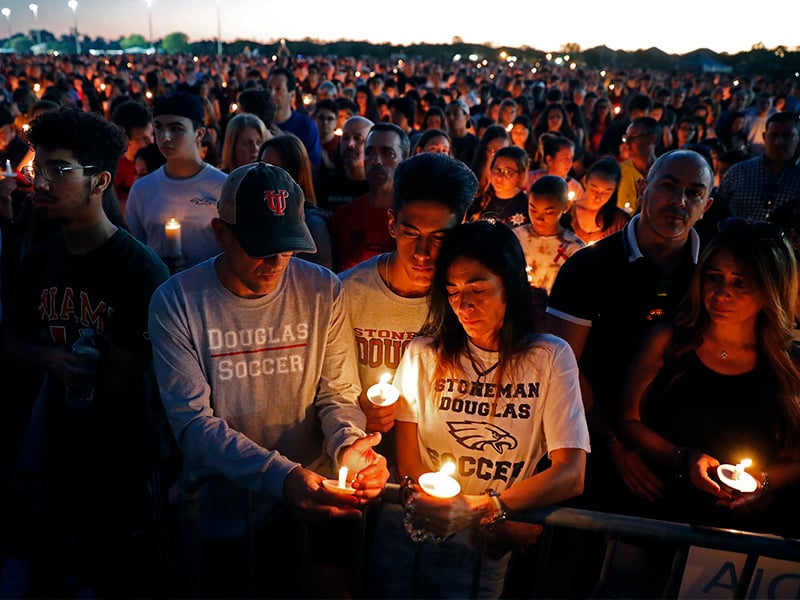 (RNS) — In Broward County, Fla., it has been like we are all sitting shiva.

The shooting in our backyard — 17 students and staff killed at Marjory Stoneman Douglas High School Wednesday (Feb. 14) — affects us in large, overwhelming, and small ways.

My parents were both schoolteachers. They woke up early; worked very hard (my mother, of blessed memory, to an early grave); gave tests; filled out numerous reports; and loved their students.

They knew that their job was to shape their students' lives.

They never imagined that their job was also, potentially, to save their students' lives.

It is now up to the kids.

It is now up to the kids — who saw their friends and classmates gunned down; who are now too traumatized to go back to their classrooms; who saw their peers murdered in cold blood.

Actually — no, we didn't. We think that we tried, but we didn't do nearly enough. We screamed, but not loudly enough. We have been too nice, too polite, too neat.

It is now up to the kids.

I am old enough to remember when a younger generation created revolutions.

I am old enough to remember how we fought against an illegal and immoral war in Vietnam. Some of us got hit with tear gas. It was awful; we survived.

Our parents supported us. They let us cut school for moratoriums, and marches on Washington.

We saw our friends, our peers, cut down in gunfire at Kent State University in Ohio, in May 1970, as they were protesting the invasion of Cambodia.

The four students who were shot by the National Guard (several of whom were Jewish; one of whom lived in the town adjacent to where I grew up) would have been about 67, 68, 69 years old today — ready for retirement, playing with their grandchildren.

Their blood cried out from the ground, like that of Abel, Cain's brother. That happened two weeks before my confirmation ceremony. At the service, we all wore black armbands. We were not silent. We would not let this go.

So, this is what I am saying to the younger generation.

If you are my students at my synagogue, know that I love you and that I am here for you — always.

So, I am asking you — and every other kid in America — to walk out of school on April 20.

Not quite a half century ago, we walked out of our schools.

We took to the streets — because we didn't want American kids to die in Vietnam.

You must now walk out — because we don't want American kids to die in America.

Teachers should walk out as well. Parents should support them.

Know this, as well.

You must vote for politicians who are committed to keeping you, and America, safe.

Let 250,000 people descend on Washington, D.C. We did it, 30 years ago, for Soviet Jewry. We demanded that our government intervene on their behalf.

Please — you must never, ever say that the cause is hopeless. It is so far from hopeless.

How many of you smoke cigarettes?

I will tell you why not.

You don't smoke cigarettes (OK, maybe you do. Maybe you vape. But you know that you shouldn't, I say parentally) for one basic reason.

In 1964, the U.S. surgeon general said that there was a definite link between cigarette smoking and lung cancer.

That was the moment smoking began to become uncool. It took a while, but everyone got the memo.

On television? You have got to be kidding.

If you are of a certain age, you know what the phrase "a silly millimeter longer" means.

You also know how to hum the Benson and Hedges commercial.

Just try smoking in public places in most states of this country.

Go ahead. I dare you.

At the very least, you will get creepy looks.

Why? Because it became abundantly clear.

Cigarettes were a public health emergency.

You can change the culture, if you want to. It takes work and yelling and screaming, but it can be done.

Take it from a veteran of a generation that saw its own share of changes.

Smoking was a national health hazard. So was Vietnam. (So was the plight of Soviet Jewry — a health hazard for Judaism and Jews in the former Soviet Union.)

We won those battles.

You can do it as well.

You, after all, are our children.

We must now all say to ourselves and to each other:

If this is going to end, it has to start with me.