Editors Note: The Rev. Thomas Reese was arrested with dozens of other Catholics Tuesday afternoon (Feb. 27) in the Capitol Rotunda in an act of civil disobedience. They were advocating for legislation to help undocumented immigrants brought to the U.S. as children.

(RNS) — On Tuesday (Feb. 27) I am planning to get arrested on Capitol Hill at the National Catholic Day of Action with Dreamers. My arrest will be an expression of solidarity with “Dreamers” who face arrest and deportation if Congress or the president does not do something to protect their legal status.

Dreamers were brought to this country as children by their parents. These children have grown up in this country, gone to school and church here, learned English, and are as much a part of America as someone born here.

To say that they broke the law and should be punished would be like prosecuting a baby in a stroller when its mother shoplifts diapers at Walmart.

Catholic activists occupy the Capitol Rotunda during a National Catholic Day of Action with Dreamers rally on Feb. 27, 2018, in Washington. RNS photo by Jack Jenkins

This crisis was created by the Trump administration in September when it announced plans to rescind the Deferred Action for Childhood Arrivals program, which had been put into place by President Obama. DACA allowed an estimated 780,000 Dreamers to stay temporarily in this country, and work and go to school without fear of arrest and deportation.

Because of their DACA status, many of them were already contributing with their military service. Others are teachers, health care employees or workers who serve our country in other productive ways. If they lose DACA, they could be deported, which would be tragic for them and a loss for our nation.

The American people by a ratio of 2-to-1 favor granting legal status to Dreamers. Even 51 percent of Republicans support this according to the National Opinion Research Center.

Rather than doing what is good for these children and the country, Republican leaders have played politics, trying to use the Dreamers as a bargaining chip to get Congress to pay for Trump’s wall along our southern border and to make radical changes in our immigration laws. 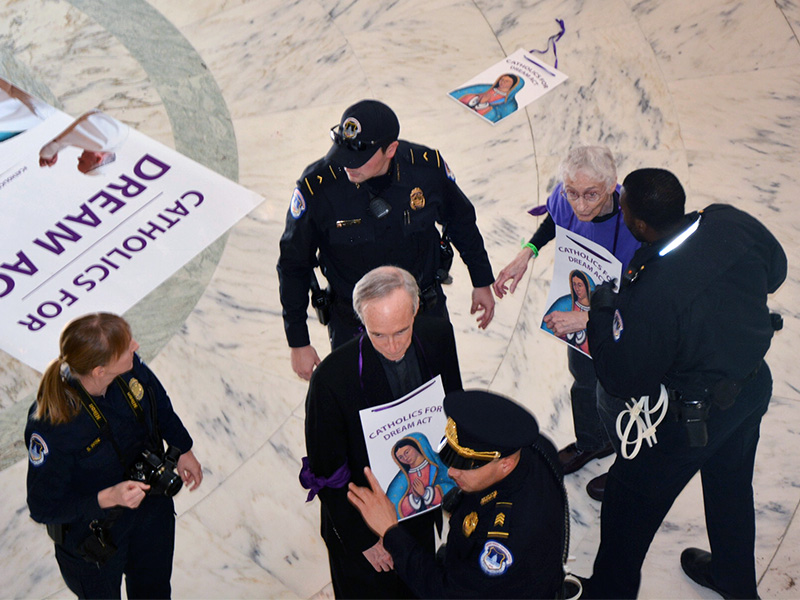 The Rev. Thomas Reese is arrested during a National Catholic Day of Action with Dreamers rally in the Capitol Rotunda on Feb. 27, 2018, in Washington. RNS photo by Jack Jenkins

What we need is legal protection for Dreamers and a path to citizenship.

This will be my first time getting arrested. Many of my Jesuit colleagues were arrested during the 1960s and 70s when demonstrations about Vietnam, civil rights and farmworkers were common. As part of these demonstrations, peaceful civil disobedience was not uncommon.

At a time when Dreamers face arrest and deportation, getting arrested is a symbolic gesture of solidarity with threatened people who are part of our community. As a Jesuit, I feel this especially because thousands of these Dreamers have been our students and parishioners. They are our friends and colleagues.

As a Jesuit, before I put myself in danger of getting arrested, I have to get permission from my provincial superior. I am happy to report that not only did I get permission, the Rev. Scott Santarosa missioned me to represent him and Jesuits West, the Jesuit province covering the Western United States. He felt strongly that we Jesuits should be speaking out and putting our bodies on the line for Dreamers. 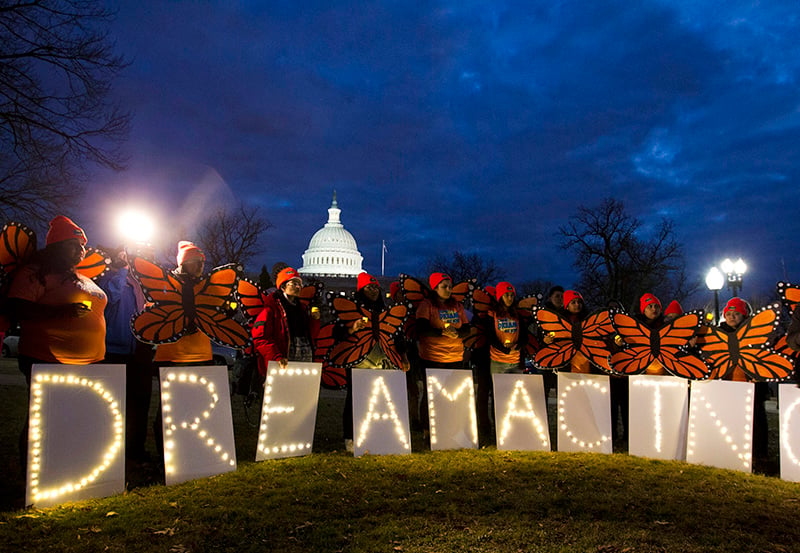 Demonstrators rally in support of Deferred Action for Childhood Arrivals (DACA) outside the Capitol, Sunday, Jan. 21, 2018, in Washington. Democrats have been seeking a deal to protect the “Dreamers,” who have been shielded against deportation by DACA, which President Donald Trump halted last year. (AP Photo/Jose Luis Magana)

At the same time, I realize that my arrest will in no way be comparable to the arrests faced by immigrants who will not be released after a few hours and a small fine. If they are not protected by DACA or new legislation, their arrests will lead to devastating and permanent damage to their lives.