(RNS) — Guam Archbishop Anthony Apuron, who was accused of sexually abusing young men, has been found guilty of some of the charges against him by a Vatican tribunal, which removed him from office and exiled him from the island.

He retains the right to an appeal.

The five-judge apostolic tribunal of the Vatican’s Congregation for the Doctrine of the Faith announced the verdict on Friday (March 16) but did not specify which allegations the 72-year-old archbishop had been found guilty of, according to the National Catholic Reporter.

Pope Francis placed Apuron, a Guam native, on leave in June 2016 after accusations emerged that the archbishop had abused young men throughout the 1960s and 1970s.

Apuron had led the island’s diocese since 1986.

Accusations came from former altar boys who said Apuron sexually abused or raped them when he was a parish priest in the 1970s. The most recent charge emerged in January 2018, when Apuron’s own nephew accused the cleric of raping him in the chancery bathroom in or around 1989 or 1990 — when Apuron was already an archbishop.

Apuron, who was never criminally charged by civil authorities in Guam, has denied all the allegations. U.S. Cardinal Raymond L. Burke, a prominent canon lawyer, was the presiding judge in the investigation.

The tiny island has been rocked in recent years by mounting allegations of sexual abuse within the Catholic Church there. In addition to the charges against Apuron, 13 parish priests, a Catholic schoolteacher and a school janitor have all been accused of sexual abuse in Guam, according to a 2017 investigation by the Pacific Daily News. The investigative team unearthed nearly 100 lawsuits alleging the abuse of children over the course of nearly four decades.

Coadjutor Archbishop Michael Byrnes, a former auxiliary bishop of Detroit, is primed to replace Apuron in the diocese if the conviction holds. But Apuron retains the right to appeal the ruling, during which the penalties against him are suspended. 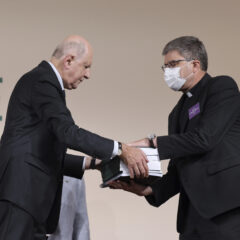