Let me get in line, and offer my praises of Barbara Bush. She was a class act, gracious, kind, and straight forward. She has earned her eternal rest, and her family deserves comfort and strength.

But, let me lift up an often-unspoken point about her death.

As it was said of the death of the Thane of Cawdor in Macbeth: “Nothing in his life became him like the leaving it.”

In her final days, Barbara Bush realized that medical intervention was fruitless. She elected to forego any further treatment, and to seek “comfort care.”

This rabbi says: She did it right.

Exodus 15:26: “For I the Lord am your healer.” We are required to imitate God, to become God’s agents in the holy task of healing.

As Abraham Joshua Heschel wrote: “Medicine is prayer in the form of a deed…The body is a sanctuary, the doctor is a priest…The act of healing is the highest form of the imitation of God.”

Leviticus 19:16: “Do not stand idly by the blood of your neighbor.”

According to Maimonides, the great medieval Jewish philosopher and physician, this verse is about healing.

If we do not do everything possible to make a sick person well, then we are standing idly by the blood of our neighbor.

In the words of the late Sir Immanuel Jackobovits, the former Chief Rabbi of Great Britain, and one of the top experts in the world on Jewish bioethics: “The value of human life is infinite and beyond measure, so that any part of life —  even if only an hour or a second — is of precisely the same worth as seventy years of it.”

But what of that painful moment when all realize that healing is no longer possible? What does Judaism ask us to do about the person who is close to death?

When someone is in the final stages of life, the impediments to death may be removed. The physician may refrain from doing that which will prevent death when it is inevitable.

These are the words of the Shulchan Aruch, the classic code of Jewish law:

If there is anything which causes a hindrance to the departure of the soul, such as the presence near the patient’s house of a knocking noise such as wood chopping or if there is salt on the patient’s tongue; and these hinder the soul’s departure, then it is permissible to remove them from there because there is no act involved in this, but only the removal of an external impediment.

I have always appreciated the Talmud’s account of the final hours of Rabbi Joshua.

His handmaiden ascended to the roof and, likewise, prayed for his healing.

But, when she saw his agony, she changed her prayer.

The sages continued to pray for his recovery. The handmaiden then took a jar, threw it to the ground — and its shattering interrupted their prayers, and Rabbi Judah died.

That (unnamed, heroic) handmaiden did the right thing.

As the medieval authority, Rabbi Nissim Gerondi, commented: “There comes a time when we should pray for God’s mercy that a person might die.”

The Jewish mandate is to seek healing, vigorously and aggressively. Judaism believes that the value of human life is of paramount importance.

But if there is no hope for true healing, we must recognize that fact; abandon false heroics; and not subject someone to pain if that pain will yield no results.

We owe the dying the genuine humaneness of living connection.

The treatment of choice is and always will be company and care.

That is how Barbara Bush left this world.

May her life and memory be a blessing. 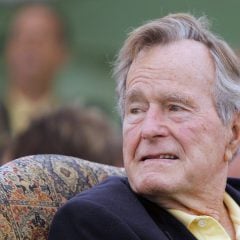 Martini Judaism
I want to die like George H.W. Bush 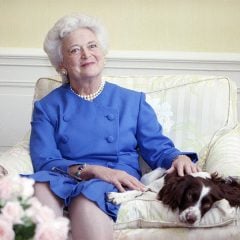