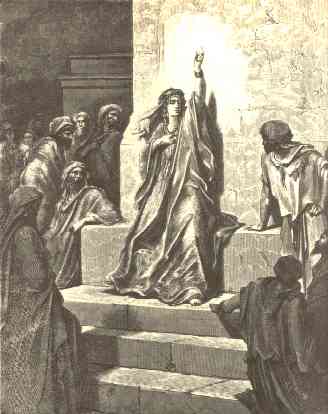 "Deborah the Prophetess" by Gustave Doré. Courtesy of Wikimedia Commons.

It’s that time again in the Mormon Gospel Doctrine cycle, when every four years we take the Old Testament character of Deborah and squeeeeeeeeze her into Mormon gender molds.

It’s the infamous Lesson #19, “The Reign of the Judges,” in which one section (“The Strength of a Righteous Friend”) focuses on the prophet Deborah. Except that it never refers to her as a prophet, as the biblical text does (Judges 4:4). The way it willfully misrepresents this kick-ass character would be comical if it weren’t so darn insulting.

The troubles are evident right from the beginning. “Barak is commanded to free Israel from Jabin,” the lesson’s opening section reads. “He agrees if Deborah will go with him.”

Not quite. The manual conveniently omits the fact that it’s Deborah who receives this commandment from God in her role as a “judge of Israel” and then relays the marching orders to Barak, a military leader.

She summons him, not the other way around. She tells him that “The Lord, the God of Israel, commands you,” and then conveys God’s specific military instructions.

A couple of pages later, the LDS manual does it again: “What did the Lord command Barak to do?” And “on what condition was Barak willing to go to battle against Sisera and his 900 chariots?”

The manual gives the impression that:

The manual then reinforces #2 by lauding Deborah as a “righteous friend” and “true friend” to Barak.

Behind every good man, it seems, there is a good woman.

The manual strips Deborah of any power the Bible gives her in her own right, by failing to mention her status as a prophet and her ongoing leadership role as a judge. In fact, at no point does the manual even refer to her as a judge, let alone herald the fact that she’s the only wholly righteous one in the entire Book of Judges. (Which makes sense, since she is also the only judge to also be called a prophet.)

The Bible is clear that Deborah is not Barak’s sidekick, but his boss. But the LDS manual transforms her into a role that is more familiar and comfortable for people unaccustomed to female leadership. In the manual she is defined by one thing, and one thing only: her relationship with a man.

Deborah is domesticated into a righteous and true friend who encourages Barak to be a better man (“What qualities did she have that Barak may not have had?” the lesson asks).

I have no doubt that Deborah was an excellent and true friend to Barak. She certainly gave him godly advice. But “friend” is just one of the many roles God asked her to play. The quiet erasure of the most public of those roles—prophet and judge—diminishes the Biblical witness.

When the manual asks us to consider why Barak was only willing to go into battle if Deborah was with him, answer the writers seem to be looking for is that she was his support system, his backup plan.

But in the biblical passage it’s pretty clear that he wants her there because he needs a prophet to tell him exactly what God wants him to do (4:7, 4:14). Deborah is the one who, with God’s help, plots the battle, explaining how many troops they’ll need and where they’ll meet the enemy. When the time comes, she even tells Barak to get off his butt and start moving (“Get up/arise!” is the Hebrew imperative).

The manual’s discomfort with female leadership is evident in the next section of the Judges lesson as well, because we skip immediately to Gideon and Judges 6 without finishing this story.

If we only had this lesson’s careful choice of verses to go on (4:1–16), we’d all be left with the impression that the Canaanite warriors were destroyed in an epic rout and that only their leader, Sisera, survived. There’s no mention at all of the fact that Sisera sneaks away but is subsequently offed by a woman (4:17–22), just as Deborah had prophesied he would be (4:9). Barak arrives on the scene ex post facto to find the deed is already done; Jael has handily driven a tent peg through Sisera’s skull.

I’d like to give the curriculum writers the benefit of the doubt here and imagine that they omitted the Jael coda because it’s incredibly violent, or because there’s only so much you can include when you’re trying to cover the entire book of Judges in 45 minutes. (Why in the world do we do that, anyway?)

But I also suspect it’s because there’s simply no way to domesticate Jael. Women who defend their nation one tent peg at a time don’t really fit with the whole “righteous friend” trope.

Many Mormon wards will be covering this lesson on Sunday, which is Mother’s Day here in the U.S. Here’s what I want for Mother’s Day: Let’s do justice to these women for a change. Let’s recount their full stories. For a more accurate look at women in Judges, check out:

This is an expanded and updated version of a post I wrote for Beliefnet in 2010, which can be found here. It’s beyond disheartening to me that nothing in the manual has changed, and we’re still rehashing the same half-truths about Deborah. The Gospel Doctrine manual dates to 1996.