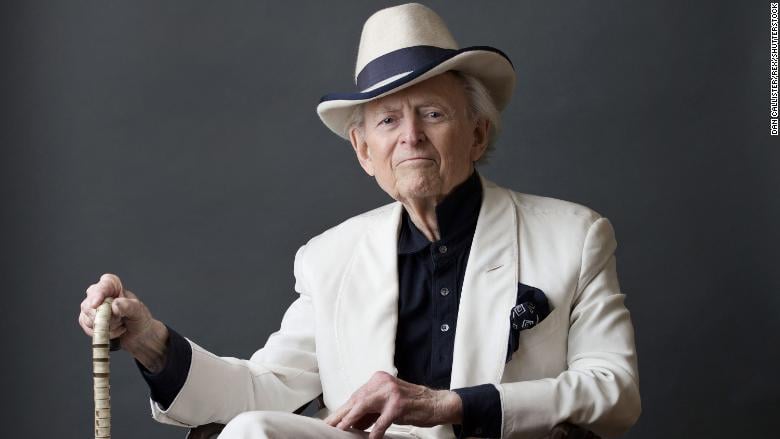 The author Tom Wolfe, who died this week at the age of 88, was decidedly not a Jewish writer.

But, he knew about Jews. Or, at least, some Jews.

The Bonfire of the Vanities opens with a confrontation between blacks and a Jewish mayor, snidely nicknamed “Goldberg!” by the crowd. The book also features a Jewish district attorney named Abe Weiss. The book's main character, Sherman McCoy, is a "master of the universe" -- which is a pretty good translation of ribbono shel olam -- which is supposed to be God, not a highly successful bonds trader.

In I Am Charlotte Simmons, there is Adam Gellin, who tutors the star athlete Jojo Johanssen.

In Tom Wolfe’s honor, I re-read his classic piece of new journalism, Radical Chic and Ma-Mauing the Flak Catchers, published in 1970.

Wolfe tells the story of the famous fundraising party that conductor Leonard Bernstein (whose centennial we mark this summer) and his wife, Felicia, threw for the Black Panthers at their New York apartment.

The guest list included some of the most famous luminaries of American culture: Otto Preminger, Broadway lyricist Sheldon Harnick, and Barbara Walters, among them.

The guests sat, enraptured, as the Panthers regaled them with their platform.

We want all black men exempt from military service. We want all black men who are in jail to be set free…We’d like to take kids on tours of the white suburbs, like Scarsdale, and let them see how their oppressors live…We want peace, but there can be no peace as long as society is racist and one part of society engages in systematic oppression of another.

If anything, the almost half century since the publication of Radical Chic has only underscored how much work has been left undone in American society.

Black youths shot in the streets; black people ejected from a Starbucks; a black woman kicked out of a Yale common room for sleeping on the sofa – how little, pathetically, has changed.

But, this is not the largest takeaway from Wolfe’s groundbreaking work.

It is the nature of “radical chic” itself.

It had become chic to be radical.

Bernstein’s guests seemed willing to overlook, or discount, or relativize, the anti-semitism that was part of the Black Panther rhetoric.

As Wolfe put it:

Radical Chic invariably favors radicals who seem primitive, exotic, and romantic, such as the grape workers, who are not merely radical and ‘of the soil,’ but also Latin…

The purveyors of radical chic didn’t even mind, terribly much, when they read a poem published in Black Power magazine, which read: “Jew-land, on a summer afternoon; really, couldn’t kill the Jews too soon…in Jew-land, don’t be a Tom on Israel’s side. Really, cause that’s where Christ was crucified."

Why didn’t the radical chic crowd protest this vile hatred?

Ever the armchair sociologist with a keen sense of class issues, especially regarding the Jews of New York, Tom Wolfe says:

“To be a UJA Zionist about the whole thing was to be old-fashioned, middle-class, middle-aged, suburban, Oceanside, Cedarhurstian…”

Translation: to be a Zionist just wasn’t chic.

To be radical – no matter the enormities and extremism of those whom you were scripted to support – that was chic.

It all started with Che Guevara, the strikingly handsome (and Jesus look alike, which totally helped his image and street cred) Argentinian Marxist revolutionary, and colleague of Castro.

Oh, how we loved him! How we had posters with his image in our adolescent bedrooms! Oh, how cool he was!

Except – Che Guevara was a homicidal thug.

And, except – the Cuban revolutionaries, presumably with Guevara’s blessing, trained the Palestine Liberation Organization in the arts of guerilla warfare. And terror. With Jewish blood on their hands.

You see how it worked? If you were a Third World revolutionary, there were no questions asked.

Which is how the keffiyeh became a fashion statement.

Which brings us to Gaza. The cult of Che Guevara – which is to say, the cult of radical chic, descended from the party at Bernstein’s pad – lives.

Because the truth is coming out. The majority of casualties along the Gaza-Israel border were, in fact, of Hamas operatives. Even and especially Hamas admits this, and is proud of it. What went down in Gaza depended on what you looked at, and what you saw – a true Rashomon.

On the one hand, there were peaceful protesters.

On the other hand, there were marauders who were rushing into Israel, ready to kill and kidnap Israelis.

And yes, horribly, there were children among the victims. When will Palestinian leaders stop worshiping Moloch, the ancient Canaanite god that desired the sacrifice of children?

Moreover, can we get real about Hamas? This is an anti-Semitic, misogynistic, anti-gay group. I don't have to get into the whole thing about how (relatively, comparatively) tolerant Israel is on LGBT issues.

All I need to do is remind the radical chic crowd:  Hamas does not believe what you believe about the world and they deserve neither your support nor your silence.

Here is what the anti-Israel crowd know.

An earlier generation of college radicals (myself included, at least for a while) successfully angered their bourgeois parents by joining the cult of Che and other leftist revolutionaries.

Perhaps the anti-Israel crowd can recruit this generation of Jewish kids to do the same thing -- to overthrow their parents' values.

Because, the BDS crowd on campus knows that when it comes to cool, Zionism ain't cutting it.

If our kids do not know the truth; if they cannot hold up their end of an argument -- which is to say, if we do not teach them and if their parents will not support their ongoing Jewish engagement and education -- they will fall for this line.

Tom Wolfe totally nailed it. In fact, Radical Chic made me want to major in sociology -- which I ultimately did, and which has informed my world view ever since.

In that sense, Tom Wolfe was one of my rabbis.