(RNS) — This week’s State Department ministerial on international religious freedom has been a well-orchestrated, if hastily organized, event with a sense of common purpose rarely seen in the current administration.

It prominently features the work of the United States Commission on International Religious Freedom, as bipartisan a body as you’ll find in Washington these days. The foreign ministers and religious leaders from around the world all concur that politics should be the furthest thing from anyone’s mind when it comes to a universal value like advancing religious freedom.

Yet it doesn’t take an expert to see that politics are everywhere in the United States’ current approach to religious freedom.

It’s plain, to begin with, that the impetus for putting on the event has much to do with President Trump’s indebtedness to conservative evangelical Christians for his election. To their credit, American evangelicals have engaged religious freedom issues for some time.

But the dominance of evangelicals in this sphere carries with it costs and oversights, including excessive deference to politicians and co-religionists who have shown hostility toward Islam.

In a meeting last month, Sam Brownback, the former Kansas senator and governor who is now U.S. ambassador-at-large for international religious freedom, reportedly lobbied British Ambassador Sir Kim Darroch on behalf of an English anti-Muslim activist, Tommy Robinson, now in jail in the United Kingdom. A State Department spokesman called characterizations of Brownback’s meeting with Darroch “completely false” but did not comment further. 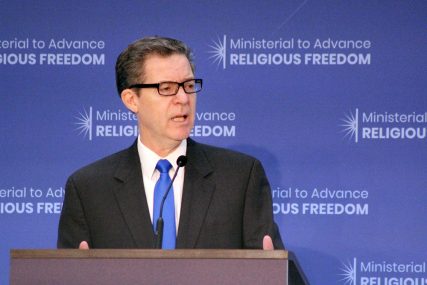 Brownback should comment further. Americans deserve to know what the United States’ interest is in a notorious bigot who has been associated with Steve Bannon, the erstwhile Trump adviser and white nativist. Brownback, who has done too little to distance himself from the anti-Muslim sentiments of the president who nominated him, should also take the opportunity to renounce positions that mar his leadership on religious freedom, including his support for Trump’s travel ban.

The White House’s equating of religious freedom with evangelical causes is apparent in its three recent nominations for USCIRF, which went to Christian political operative Gary Bauer; the Rev. Johnnie Moore, one of Trump’s liaisons to the religious right; and Nadine Maenza, who served as an aide to former Pennsylvania Republican Sen. Rick Santorum.

Trump is not alone in handing off this issue to evangelicals. Senate Majority Leader Mitch McConnell used his USCIRF nomination to appoint Family Research Council President Tony Perkins, a longtime leader in the religious right who has made disqualifying statements about Islam.

Nobody in the capital seems to be above politics when it comes to religious freedom, of course: Senate Minority Leader Chuck Schumer appointed Gayle Manchin to USCIRF, where she serves as vice chair. She happens to be the wife of West Virginia Sen. Joe Manchin, a vulnerable Democrat facing re-election this year and being pressed by Republicans to switch parties.

But the disgusting anti-Muslim sentiments of Trump and some of his supporters besmirch the argument that religious freedom is a cornerstone diplomatic priority, and, frankly, call the whole project into question.

The question is whether the ministerial, and religious freedom itself, can rise above the politics to serve a higher purpose.

The answer is likely yes. While undoubtedly a boost for evangelicals that Trump can tout as another “win,” the ministerial can only foster collaborations among the assembled government officials, civil-society representatives and faith groups and encourage them in their work ahead.

It is critical, however, for the gathering to hold the White House to account for its failures to stand up for everyone affected by religious persecution. In a thoughtful op-ed in the Globe Post, University of Vermont Professor Peter Henne says religious freedom advocates often “prize institutional access too highly.”

The well-meaning advocates who accepted the State Department’s invitation this week despite Trump’s record on Islam need to say plainly that Trumpism and international religious freedom contradict each other in ways we cannot ignore.