(RNS) — As a teenager, J. Nicole Morgan was fond of her reflection in the mirror. She liked her eyes and her smile. But then she looked at her arms and stomach and reminded herself that she was not pretty and could not possibly be the person God made her to be.

God doesn’t want you to be fat, she told herself. Fat can’t be beautiful.

It’s a message that stuck with her for years, said Morgan, author of a new book, “Fat and Faithful: Learning to Love Our Bodies, Our Neighbors, and Ourselves.” 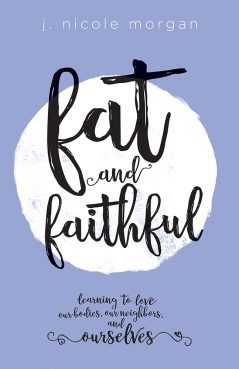 Part memoir and part theological reflection on body image, community and food, Morgan’s book challenges congregations and people of faith to think about what it means to embrace one another as created in the image of God.

The book is not just for the evangelicals she grew up with, said Morgan. They taught her that God did not want her to be fat. But progressive churches can also have an anti-fat bias. Her conversations with people across the religious spectrum indicate that most traditions fail to teach or embody fat acceptance, though few are deliberately malicious.

Take the case of megachurch pastor Rick Warren, who once wrote a Christian weight loss book after the experience of baptizing fat people, lowering them into the water and raising them back out again.

“I literally felt the weight of America’s obesity problem and I thought, ‘Good night, We’re all fat!’” he told The Wall Street Journal back in 2014.

Morgan recalls feeling anxiety over her own baptism. Warren’s book, she said, sent a message that something was spiritually wrong with her.

“Warren used a sacrament that welcomes us as beloved children into the family of God to issue judgment on the very people he pronounced new life over as he lifted them from the water,” she said.

In addition to offhand jokes, body shaming from the pulpit and a stream of “diet devotionals” sold in evangelical bookstores, Morgan critiques a particular trend among popular pastors a few years ago: publicly celebrating their “smoking hot” wives.

As a teenager, she said, she believed that inner beauty matters most for Christians. If she loved God, she’d find a godly man who loved her soul.

Churches offered classes on relationships and dating, but Morgan was convinced she did not need them. She assumed nonreligious men would be superficial and thus not interested in her. Godly men would be drawn to her inner beauty, unconcerned about her size.

Reality did not conform to those expectations. Bad relationship stories colored by mistaken ideas about both fatness and faith fill out Morgan’s narrative.

“Part of it,” she said, “is that fat girls don’t have as much practice (with dating). They don’t get the attention early. They don’t learn what’s good and what’s bad.” 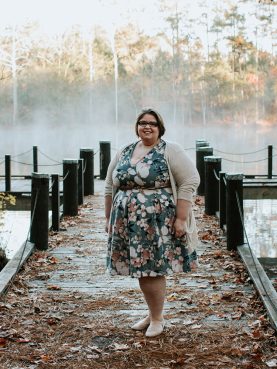 Morgan noted that pre-industrial societies associated fatness with high socioeconomic status. And she draws a distinction between gluttony and being fat. Gluttony, one of the seven “deadly sins,” is about disordered appetites and consumption, not body size, she said.

“To direct the fault of that sin in the sole direction of fat people is to make a mockery of the Imago Dei present in each human,” she said.

Being overweight can lead to health concerns.  Morgan devotes a chapter to this issue, advocating that health should be assessed in “weight-neutral” ways. She concedes that there is obviously a correlation between weight and health. But health care providers can be obsessed with weight loss to the exclusion of other health indicators.

She pushes back against the idea that fatness results principally from an individual’s poor habits and discipline: Food deserts, time to prepare healthy food, access and time for recreation and physical activity all play a role.

“We need to change the way as a society that we take care of each other,” she said.

Morgan’s not the only person in the pew to struggle with body image. Readers — even if they don’t consider themselves fat — can relate to the insecurities she describes.

And all people of faith can imagine the distance between where they are and where God wants them to be. But Morgan shows convincingly that, no matter our body mass, our theologies of weight and size are much too thin.

Faith communities should “open their doors and their hearts a little wider,” Morgan said, in order that they might love their neighbors and their enemies and all God’s children better.