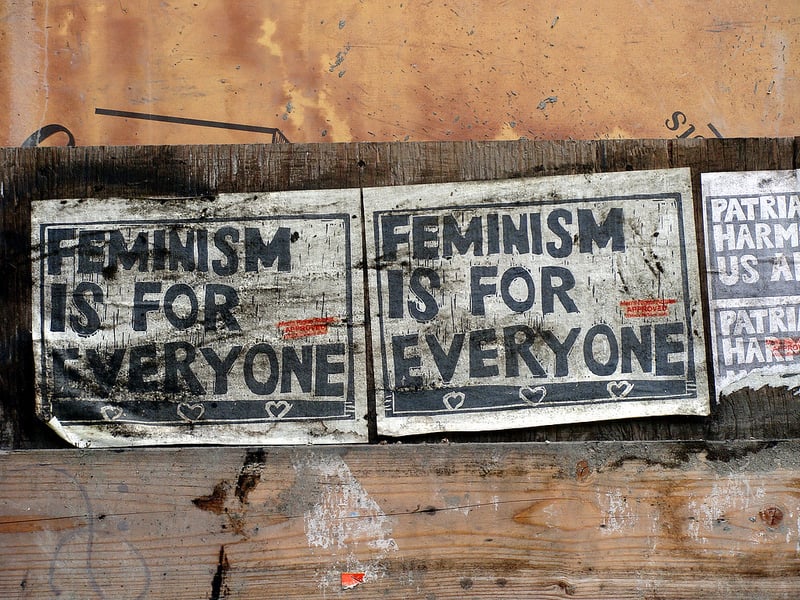 Feminism is for everyone. Photo by user knightbefore_99, via Flickr Creative Commons.
September 14, 2018
Jeffrey Salkin

When you hear the blast of the shofar, what should you really be hearing?

According to the Talmud, you should hear howling. The howling, the crying, the screams of women.

The scriptural readings for the Days of Awe are filled with women's cries.

5778 has been the year when, as a society, we confronted the wounds of patriarchy. This was the year of the fastest growing social movement of our time -- #metoo – the stories of women (and men, as well) who have accused powerful and accomplished men of sexual harassment.

Many of the men who have behaved despicably have produced great work.

Question: Is it kosher to admire their work, and to quote their scholarship, and to cite their writings? To what extent do our moral failings -- what we do -- utterly pollute what we are?

More than that: How long should the punishment last? How long the ostracism? Is redemption for the abuser ever possible? If so, when?

This moment in our culture is the Shema koleinu moment. Hear our voices.

Have we really heard the voices of women who complain of harassment? Do we believe them? Do we make excuses for the men who are responsible? Do we blame the victims?

Those are the relatively privileged women. There are so many others.

Have we heard the voices of the mothers at our borders? Did we hear their screams – as authorities put their children into cages, and drugged them?

It is not only the voices of women. What is now incumbent upon us is to hear the voices of those whose voices are not often audible.

The best book that you will read this year – about Israel, and about Judaism – is Letters to My Palestinian Neighbor, by Yossi Klein Halevi.

As we Israelis celebrated our reclaimed sovereignty and achieved one success after another, your people exchanged homes and olive orchards for the scorched earth of refugee camps, where you raised children without hope, the unwanted outcasts of the Arab world. I mourn the lives wasted in the bitterness of exile, your despair against my joy. For many years we in Israel ignored you, treated you as invisible, transparent.

Both Jews and Palestinians must hear and honor each others’ stories. Even before there can be a two-state solution, there needs to be a two narrative solution. Jews need to hear about how Palestinians took the keys to their family homes in Jaffa and Haifa.  Palestinians need to remember how Arabs slaughtered Jews in Iraq, how they forced Jews from their homes in Syria.

We all have relatives, or close friends, or associates – with whom we disagree vehemently on fundamental political and social issues.

How do you stay in relationship with those people – assuming you want to?

Next time you hear, feel, and/or sense that an argument is coming, ask the following question.

“How did you arrive at your opinion on this matter?’

Then, you lean forward – and you listen.

It is not easy.

First, because you hear things that you really don’t want to hear.

But, second: when you listen, you become vulnerable.

Because when you listen, that act of listening can actually change you.

After all, what is the central commandment of Jewish life? Sh’ma Yisrael: hear. Listen.

It is to imagine that in the inarticulate blasts that we hear, that if we strain our ears, we can hear a whole new language.