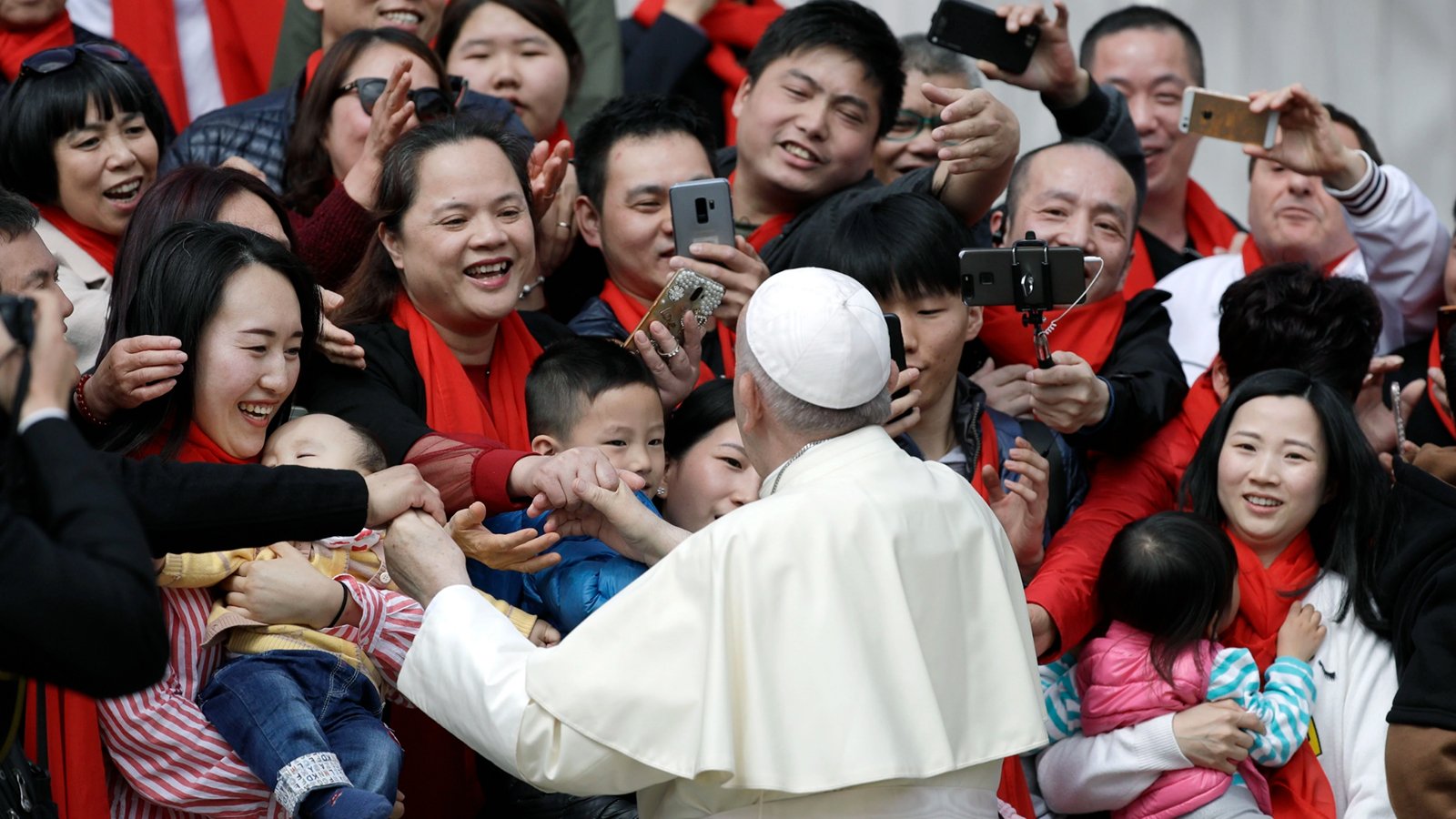 In this April 18, 2018, file photo, Pope Francis meets a group of faithful from China at the end of his weekly general audience in St. Peter's Square, at the Vatican. On Sept. 22, 2018, the Vatican announced it had signed a "provisional agreement" with China on the appointment of bishops, a breakthrough on an issue that for decades fueled tensions between the Holy See and Beijing and thwarted efforts toward diplomatic relations. (AP Photo/Gregorio Borgia)
October 5, 2018
Mark Silk

(RNS) — Last week's signing of a provisional agreement between the Vatican and the People's Republic of China opened up another front for Pope Francis' right-wing critics to do battle.

"An astonishing diplomatic blunder and betrayal: the Vatican gives over the power to control bishops' appointments to a regime with a history — and current policy — of repressing the faith," tweeted Catholic Culture's Philip Lawler. Over at LifeSiteNews, Peter Kwasniewski claimed the agreement fits into Francis' "larger agenda" of undermining "true orthodox" Catholic identity.

EWTN's Raymond Arroyo started a Twitter spat with a Chicago priest who praised Francis for getting to a place with China that John Paul II had tried to get to for years without success. "Get where?" tweeted Arroyo. "To surrender the Apostolic authority to choose bishops? To hand the brave and suffering Chinese Underground Church over to the Chinese religious authorities?"

The redoubtable papal historian George Weigel compared the agreement to the Vatican's 1933 concordat with Nazi Germany. "Vatican sources are calling the deal 'a historic breakthrough,' but the only thing 'historic' about it is the inability of Vatican diplomacy to learn from history," he harrumphed.

And yet, among even the most stalwart anti-Franciscans there were recusants. "It is not because Francis has been such a bad Pope on so many levels that every single thing he does is bad," the traditionalist blog Rorate Caeli grudgingly conceded. "The China agreement has to be judged on a pragmatic basis — as so many other agreements the Church has signed in her history."

Indeed. When you've got a church that's been around for the better part of two millennia, there's a lot of history to learn from.

The biggest bone of contention between Rome and Beijing has long been who gets to appoint bishops — an issue most thoroughly fought out nearly a millennium ago in what's known as the Investiture Contest.

In the early Middle Ages, no one thought twice about kings or emperors deciding who the bishops in their territories would be and investing them with the pastoral staff and ring. To become a bishop was to become a powerful lord, and sovereigns couldn't afford to let just anyone take charge of all those lands and people.

Then, in the middle of the 11th century, reformers in Rome came to believe there was something profoundly wrong with having secular authorities endow religious leaders with spiritual authority. Thus ensued the first great contest between papacy and empire, which included the famous scene in which the excommunicated Holy Roman Emperor Henry IV walked barefoot through the Alpine snow to beg absolution from Pope Gregory VII.

The contest lasted decades, but eventually a compromise was worked out. Bishops would be canonically elected (popes didn't appoint bishops in those days) and the emperor agreed no longer to invest them with staff and ring. But he was permitted to be present at the elections and to receive homage from nominees — which he could refuse. (Another candidate, please.)

In the hundreds of years since, Rome has made many such compromises, as it sought to secure acceptable episcopal leadership in its far-flung dominions. Despite the church's disapproval (until recently) of countries that separated church and state, it was in places where the principle was applied most strictly that total control over bishops' appointment came easiest. Elsewhere, not always so much.

Article 36 of the Chinese Constitution guarantees freedom of belief but goes a good way toward limiting religious activities and authority. Its last two sentences read:

No one may make use of religion to engage in activities that disrupt public order, impair the health of citizens or interfere with the educational system of the state.

Religious bodies and religious affairs are not subject to any foreign domination.

It is possible to feel some sympathy for the second of these, given the extent to which Western colonialism and missionary activity went hand in hand in pre-communist China. Significantly, in his letter to Chinese Catholics last week, Pope Francis stressed the importance of cooperating with civil authorities to "help make it clear that the Church in China is not oblivious to Chinese history."

The principal ecclesial effect of the agreement will be to unite the officially sanctioned Chinese Church and the unofficial underground church. Both communities use the same Bible and missal, and both pray for the Holy Father when celebrating the liturgy. In terms of faith and practice, they are one church.

Nevertheless, the undergrounders are distressed. Like the Donatists of old, who believed that clergy who had kowtowed to the Roman persecutors were illegitimate, they don't want to acknowledge the legitimacy of the bishops already ordained without papal mandate in the official church — those whom Francis has now recognized and admitted to full communion with Rome. Complete integration of the two communities will probably take some time.

Exactly how bishops will be appointed has not been revealed, and may not even be specified in the provisional agreement, whose text has not been released. But in due course we'll see that both sides are assured of a say, as they were in the Middle Ages.

In fact, Francis' letter harks back to medieval times by putting the episcopal job search in the hands of the Catholic folk on the ground:

Yet an important part also falls to you, the bishops, priests, consecrated men and women, and lay faithful: to join in seeking good candidates capable of taking up in the Church the demanding and important ministry of bishop. It is not a question of appointing functionaries to deal with religious issues, but of finding authentic shepherds according to the heart of Jesus, men committed to working generously in the service of God’s people, especially the poor and the most vulnerable.

May their searches be successful.

(Mark Silk writes the Spiritual Politics column for RNS. The views expressed in this commentary do not necessarily reflect those of Religion News Service.)