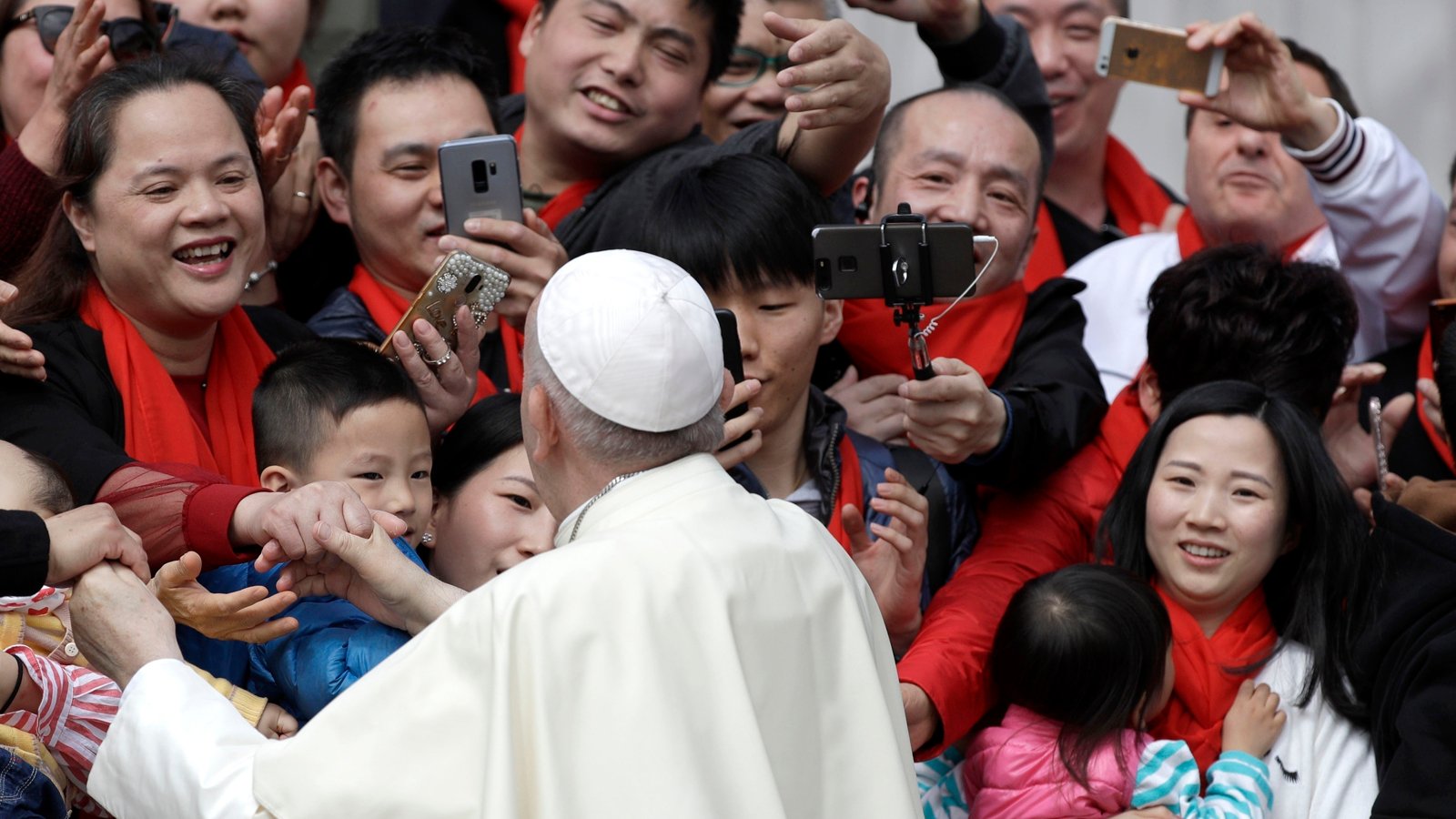 In this April 18, 2018, file photo, Pope Francis meets a group of faithful from China at the end of his weekly general audience in St. Peter's Square, at the Vatican. On Sept. 22, 2018, the Vatican announced it had signed a "provisional agreement" with China on the appointment of bishops, a breakthrough on an issue that for decades fueled tensions between the Holy See and Beijing and thwarted efforts toward diplomatic relations. (AP Photo/Gregorio Borgia, file)
September 22, 2018
The Associated Press

VATICAN CITY (AP) — The Vatican and China said Saturday (Sept. 22) they had signed a "provisional agreement" over the appointment of bishops, a breakthrough on an issue that stymied diplomatic relations for decades and aggravated a split among Chinese Catholics.

The deal resolved one of the major sticking points in recent years, with the Vatican agreeing to accept seven bishops who were previously named by Beijing without the pope's consent.

The development comes nearly seven decades after the Holy See and Beijing severed official relations. Beijing's long-held insistence that it must approve bishop appointments in China had clashed with absolute papal authority to pick bishops.

With the status of the seven bishops now reconciled, the Vatican said all bishops in China are now in communion with Rome — even though the Catholic community in China is still split between Catholics who belong to the official Chinese church and those in the underground church who remained loyal to the pope.

"Pope Francis hopes that, with these decisions, a new process may begin that will allow the wounds of the past to be overcome, leading to the full communion of all Chinese Catholics," a Vatican statement said.

Some Chinese Catholics have opposed such a deal, notably Hong Kong Cardinal Joseph Zen, who before the deal was announced called it a sell-out of Chinese Catholics who refused to join the state Chinese Catholic Patriotic Association and who paid the price of remaining faithful to Rome during years of persecution.

There was also no immediate mention in the deal of the status of several underground bishops named by the pope.

Vatican spokesman Greg Burke, speaking in Vilnius, Lithuania, where Pope Francis was visiting, indicated the accord would serve as a blueprint for future appointments of bishops, who lead the faithful in their dioceses.

Burke told reporters the aim of the accord "is not political but pastoral, allowing the faithful to have bishops who are in communion with Rome but at the same time recognized by Chinese authorities."

The Vatican's No. 2 official indicated that the pope and the Chinese authorities would jointly approve new bishop appointments.

"What is required now is unity, is trust, and a new impetus: to have good pastors, recognized by the successor of Peter (Pope Francis) and by the legitimate civil authorities," said Cardinal Pietro Parolin.

A Vatican official, speaking earlier this year on the contours of the plan, said the deal allows the pope to effectively veto future bishop names proposed by Beijing. That official, who spoke on condition of anonymity because diplomatic negotiations were involved, had described it as the best arrangement the Holy See could achieve for now.

The deal's provisional nature left open the possibility of improvements down the line.

The Vatican described the provisional agreement as "the fruit of a gradual and reciprocal rapprochement" after a "long process of careful negotiation."

While the agreement could help pave the way for formal diplomatic ties and possibly an eventual papal trip to China, it was also sure to anger Catholics who vigorously advocated for the Vatican to maintain a hard line on caring for the 12 million Catholic faithful in China. Zen, the Hong Kong cardinal, didn't immediately respond to an Associated Press request for comment on the deal.

The accord was signed in Beijing during a meeting between China's deputy minister for foreign affairs, Wang Chao, and the Vatican undersecretary for state relations, Monsignor Antoine Camilleri.

In Beijing, the Foreign Ministry said "China and the Vatican will continue to maintain communications and push forward the process of improving relations between the two sides."

Even as China professed the desire for better relations with the Holy See, the deal was signed against a backdrop of a Chinese crackdown on religions.

In one glaring case of the plight of pro-Vatican Catholics in China, Bishop Guo Xijin, head of an underground diocese, was whisked away in March by government agents in the southern village of Saiqi.

It wasn't immediately clear how the new accord affected him and others opposing Chinese authorities.

"The question now is: What is going to happen to the bishops who are under house arrest?" said the Rev. Bernardo Cervellera, a Vatican-China expert and chief editor of the missionary news agency Asia News.

Cervellera cited Shanghai's underground bishop and others under house arrest, as well as priests who were imprisoned. He said that about a year ago, some 10 priests were in prison in Hebei province near Beijing, but he didn't know their current situation.

The Vatican "had to start a dialogue from a weak position, because China is very powerful and therefore dictated the rules of this dialogue," Cervellera told the AP.

Under President Xi Jinping, China's most powerful leader since Mao Zedong, faithful are seeing their freedoms shrink even as the country experiences a religious revival. Experts and activists contend that as Xi is consolidating power, he is waging the most systematic suppression of Christianity since the Chinese Constitution allowed for religious freedom in 1982.

Xi is trying to infuse all of the religions in China with "Chinese characteristics" such as loyalty to the Communist Party.

As part of this drive, Islamic crescents and domes have been stripped from mosques and a campaign is underway to "re-educate" tens of thousands of Uighur Muslims. Tibetan children have been moved from Buddhist temples to schools and banned from religious activities during summer holidays, state-run media have reported.

This spring, a five-year plan regarding Christians was introduced, along with new rules on religious affairs. Over the last few months, local governments across China have shut down hundreds of private Christian "house churches."

The Vatican spokesman indicated there was still some ways to go for better relations between the Catholic Church and China.

"This is not the end of a process. It's the beginning," Burke said. "This has been about dialogue, patient listening on both sides even when people come from very different standpoints."

In Beijing, Zhang Ye, a 31-year-old Catholic leaving church after a Saturday evening Mass, said the Vatican couldn't afford to ignore the importance of China and the growing number of believers in the country.

"My biggest wish is that we can have more communication and interactions with Vatican," he said.

Bridging different points of view has characterized much of Francis' five-year papacy and led to the Vatican helping improve relations between another communist nation, Cuba, and the United States.

In Taiwan, the reaction focused on the plight of ordinary Catholics in China.

"As the world watches China increasingly tightening control over religious practices, Taiwan trusts that the Holy See has made appropriate arrangements to ensure that Catholic adherents in China will receive due protection and not be subject to repression," Taiwan's Foreign Ministry said.

Related Posts
By Reese Dunklin, Michael Rezendes
Catholic Church lobbied for taxpayer funds, got $1.4B
By Claire Giangravé
Vatican Museums used to be an overcrowded ‘hell,’ say tour guides. COVID-19 may change that.
By Alejandra Molina
We have a story to tell: Indigenous scholars, activists speak up amid toppling of Serra statues
By Ira Rifkin
As Dalai Lama turns 85, his lineage’s future is as uncertain as Tibet’s
By Aysha Khan
On July 5, Uighurs remember 2009 violence that set Chinese crackdown in motion