(RNS) — Three months ago, I identified Utah’s medical marijuana ballot initiative as one to watch — not just because of the issue itself but as a test case in Mormon politics. It would be a test, I said, whether the Church of Jesus Christ of Latter-day Saints can still be a political force when it takes a decisive stand on a measure.

History was not on the side of Issue 2’s proponents, who favored legalizing medical marijuana. On issues like the Equal Rights Amendment and more recently on same-sex marriage, LDS church members have largely fallen in line when the church made its concerns plain. In the case of the ERA, members switched their votes almost overnight in 1975 after the First Presidency spoke out against it.

So for the church to come out so strongly in instructing members to vote against Issue 2 could have spelled doom for its supporters.

But last night’s election told a different story, one of changing demographics and a dwindling Mormon majority in the state. Although the final precincts are still being counted, the vote currently stands at 53 percent in favor and only 46 percent against.

Mormons are still a majority in Utah, at least for the moment. Pew and PRRI data put the Mormon population at either 55 percent (Pew, 2014) or 51 percent (PRRI, 2016) of the state’s population. (That includes only those people who check “Mormon” or “Latter-day Saint” on a survey, not the higher number of Utahns who are listed in the membership rolls of the church but do not attend regularly or consider themselves active.)

If current patterns continue — which include more non-Mormons moving to Utah because of its blazing-hot economy and more Mormons becoming disaffected with the church — it will not be long before Mormonism enjoys a plurality, but not a majority, of the state’s population.

And that will be a major change politically. Remember that back in Utah’s territory days, Brigham Young was simultaneously the territorial governor and the president of the LDS Church. The church was the law.

Mormon political power has never been so concentrated as it was then, of course. The 20th century saw a careful movement away from theocracy and toward assimilation into the American mainstream. Still, the deep political power exercised by members of one denomination in Utah is unusual.

Last night that tradition showed signs of cracking, with the approval of the marijuana measure being only the most dramatic example. Two other things happened that may indicate change on the ground.

Let’s start with Mitt Romney’s U.S. Senate win. His landslide was huge; he received two votes, effectively, for every one cast for Democratic challenger Jenny Wilson. Anyone would be happy with such a mandate in today’s polarized political climate. But the 62 percent of the vote Romney has as of now is a double-digit drop from his 73 percent win in Utah when he ran for president in 2012.

Again, no one is saying that Romney was ever in danger of losing a seat that has been held by fellow Mormon Republican Orrin Hatch for 40 years (!). But in Utah, for a popular Republican to win by a two-thirds majority instead of a three-quarters majority suggests a shifting electorate.

Second is Ben McAdams, the Democratic challenger to two-term congressional representative Mia Love. Despite Love’s well-publicized campaign finance peccadilloes, I was very surprised a couple of weeks ago to see McAdams polling neck-and-neck with her. I am even more surprised today, as he is still holding a slim lead.

A McAdams win in Utah would be surprising. Though he, like Love, is a Mormon, he has expressed some views that conservative LDS leaders would likely find objectionable.

Love has tried to capitalize on this. In September she attacked McAdams as a supporter of same-sex marriage, which to traditional Mormon ears is akin to a religious heresy charge since the church has come out so strongly and consistently against that issue. (To Love’s credit, the PR firm in charge of the attack was later fired, according to the Salt Lake Tribune.)

With the House seat still in play until the final votes are counted, it’s anyone’s guess how this will turn out. But one pattern is emerging: Mormonism’s control of Utah politics is slipping, bit by bit.

Correction: An earlier version of this post claimed that Brigham Young also had oversight over railroad and utility interests while he was serving as governor and president of the church. We are grateful to a reader who pointed out that the governorship and the business interests did not fully coincide. 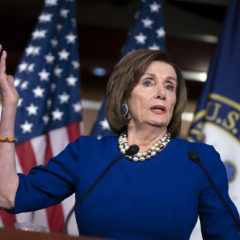 Opinion
How Romney and Pelosi used their faith to resist Trump
Follow us on Facebook!
Submit your photos to RNS