(RNS) — Ten years ago, SNAP was the butt of the most outrageous criticism in its three decades of work on behalf of clergy sex abuse survivors.

SNAP, the Survivors Network of those Abused by Priests, was founded with a focus on Catholic clergy abuse. But as we expanded our efforts to other faiths, the worst name-calling came not from any Catholic official but from a Baptist official. Paige Patterson, a former Southern Baptist Convention president who, at the time, was head of a prominent Baptist seminary, labeled SNAP as “evil-doers” and said we were “just as reprehensible as sex criminals.”

It may seem odd to note the anniversary of such an odious aspersion, but at a time when survivor advocates have much to cheer about, it’s important that we not lose sight of how much work remains to be done in changing institutions and attitudes to make kids safer.

Too many survivors still face hostility when they attempt to confront religious leaders about clergy child molesters. The U.S. Justice Department has now launched an investigation into the sexual abuse of children and the cover-up of those crimes in the Catholic dioceses of Pennsylvania. And because the Justice Department put every diocese in the country on notice that they should preserve all documents relating to sexual abuse allegations, there appears the possibility of a broader investigation into Catholic abuses and cover-ups.

This federal intervention is a significant and long overdue development. SNAP first asked for such a probe in 2003. So you can be sure we are applauding.

But what about other faith groups?

For example, how can we uncover the scope of the clergy abuse scandal in the country’s largest Protestant denomination, the Southern Baptist Convention? With a claimed membership of more than 15 million, it’s a faith group in which a lot of kids are at risk.

For years, the uncovering of the Catholic clergy abuse scandal has been fueled in significant part by the Catholic Church’s own documents. But Southern Baptist officials have long disclaimed any denominational obligation for record-keeping on clergy perpetrators, and so the relatively inexpensive investigatory tool of subpoenaing documents would likely be far less productive.

As evangelical sex abuse expert Jimmy Hinton so succinctly explained: “We’re passing people around just as much as the Catholics do — we just don’t keep record of it.” 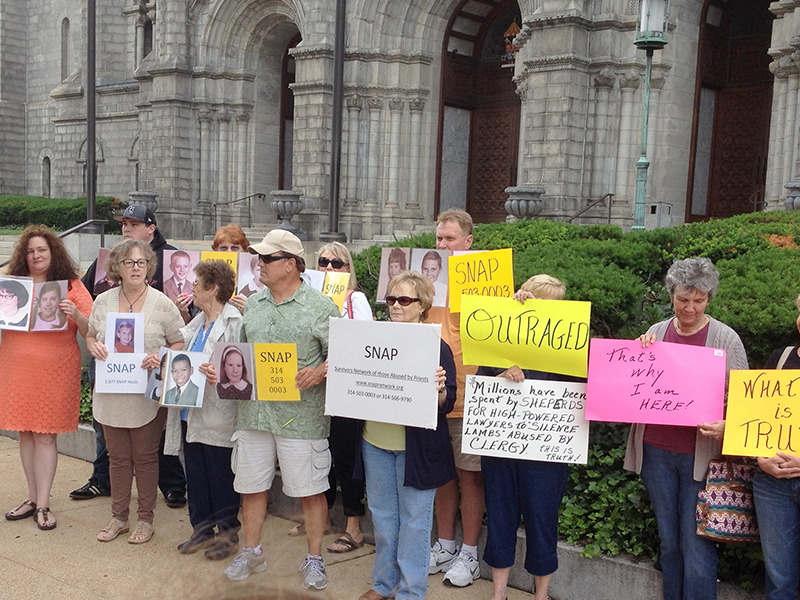 Catholics and sexual abuse survivors protest in front of the Cathedral Basilica of St. Louis on June 11, 2014. The group gathered in response to a deposition given by St. Louis Archbishop Robert Carlson. Photo courtesy Barb Dorris/SNAP

SNAP had been advocating for exactly that — a Baptist system of record-keeping and information sharing — when Patterson made that repugnant remark. We had delivered a letter to top Southern Baptist officials, urging them to create an independent review board to receive and assess reports about clergy sex abuse, to keep records on those reports and to inform congregations about credibly accused clergy.

It was a common-sense request aimed at protecting kids from church-hopping clergy predators. Yet Southern Baptist officials refused, offering up a glossy brochure of nice-sounding words instead. It appeared the Baptist officials had gleaned from the Catholic scandal not a lesson about the need to better protect kids but rather a lesson about the need to avoid record-keeping so as to better protect the institution.

Catholics and Baptists are hardly alone in their institutional failures. Thomas Doyle, the courageous priest who first warned Catholic officials of their looming scandal, told the terrible truth back in 2007 when he cautioned that “clergy sex abuse is a scourge that knows no bounds of theology, denomination or institutional structure.”

The number of children known to have been abused in the Catholic Church alone is staggering. For example, when a grand jury reported on its investigation of just six dioceses in Pennsylvania, it counted more than 1,000 victims and concluded there were likely many more.

Indeed, based on insurance company data, some experts have posited that more children are likely being abused in Protestant churches than in Catholic churches, and as with Catholics, leaders’ responses have too often been abysmal. Time and again, we see revelations of church and denominational officials who chose child-endangering do-nothing responses and who allowed accused perpetrators to move on to new congregations rather than reporting them to the police.

What’s needed is a full-scale national inquiry akin to the one that was done in Australia — an inquiry that focuses on all faith groups and that not only subpoenas documents but also hears extensive testimony.

In a five-year study that experts describe as the “gold standard” of such investigations, Australia’s Royal Commission on Institutional Responses to Child Sex Abuse assessed crimes against children in more than 4,000 institutions, including all religious organizations. It not only examined more than 1.2 million documents but also heard from 8,000 survivors in private sessions and from 1,200 witnesses in public hearings. Then, based on the common institutional patterns it uncovered, the Royal Commission made recommendations for how to make religious institutions safer for children, including recommendations for improved record-keeping and information sharing.

The pervasiveness of the problem and the high stakes of children’s well-being compel the need for such a comprehensive inquiry in this country also. Americans deserve no less. If we want our children to be safer, we cannot afford the comfortable delusion that this is an isolated problem of a single diocese, a single state, a single faith group or a single institution.

(Christa Brown is the author of “This Little Light: Beyond a Baptist Preacher Predator and His Gang,” and she serves on the board of advisors for the Child-Friendly Faith Project. David Clohessy is the former longtime director of SNAP, the largest and most active network of survivors of institutional sexual abuse, and he currently serves as SNAP’s volunteer director for St. Louis. The views expressed in this commentary do not necessarily represent those of Religion News Service.)