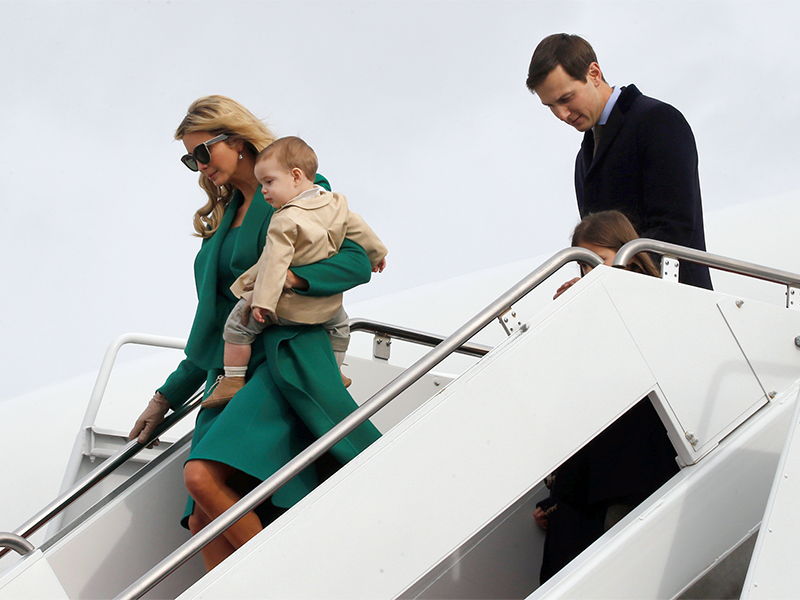 U.S. President-elect Donald Trump's daughter Ivanka Trump, her husband Jared Kushner, and their family arrive ahead of the inauguration with her father aboard a U.S. Air Force jet at Joint Base Andrews, Maryland, on Jan. 19, 2017. Photo courtesy of Reuters/Jonathan Ernst
November 26, 2018
Jeffrey Salkin

Notice that I wrote "Ivanka."

Not: "Ivanka and Jared." As a political entity.

I'm only talking about Ivanka here.

Frankly, the whole notion of whether someone, or something, is "good for the Jews" feels a little, oh, 1970s to me.

So, I warn you: this blog is not about Jared and Ivanka's politics.

I wish that those political positions were very different. I wish that they would be vocal about the plague of anti-semitism and hatred that is afflicting this nation. And, yes -- I believe that she is as complicit in the manifold failings of this administration as anyone else in that administration.

But, let's take the politics out of the conversation, for one moment.

Ivanka is good for the Jews and for Judaism because she chose to join the Jewish people (a phrase that I vastly prefer to "convert").

She has followed in the path of countless Jews throughout our history -- starting with Abraham and Sarah themselves.

She has walked in the path of such luminaries as: Marilyn Monroe, Elizabeth Taylor, Connie Chung, Sammy Davis, Jr., Isla Fisher, Daryl Hall, Jim Croce, among many others.

She has  added to the numerical strength of the Jewish people. She has made herself, and her children, part of Jewish history.

When it comes to Ivanka and Jared's politics -- I am so not a fan. Not even close.

When it comes to their Jewish choices -- I am a fan.

People ask: Did Ivanka join the Jewish people for the purpose of marriage to Jared?

Answer: To quote Rhett Butler: "Frankly, my dear, I don't give a damn."

Oh, sure: Jewish law (the Shulchan Arukh, to be exact) cautions would-be Jews: "Have you been 'checking out' (a reasonable translation) Jewish men or women?"

In other words, joining the Jewish people because of a romantic interest in a Jewish spouse was, well, treif.

Why don't I care about this? And why would I invite you not to care, either?

More than this: why would I invite you to care less about the motives of others who want to become Jews?

Because of another ancient Jewish principle: "Even though someone might do something for an ulterior motive, at a certain point they will come to do it for a pure motive."

The Talmud invokes this idea in connection with a gentile who decides to join the Jewish people because he wants to become the High Priest (a laughable idea, on the very face of it). He craved the power, the glory -- and probably also the cool clothes.

Sure, he just wants the status, but at a certain point, he will come to love Judaism and the Jewish people for its own sake.

That is my attitude towards those who choose Judaism and the Jews because they want to join a Jewish family.

Here is the reason. Quite often, those gentiles are already pre-disposed to love Judaism.

In my experience, I have noticed that often non-Jews consciously or unconsciously choose Jews as their marriage partners -- precisely because they love Judaism, the Jewish people, and the idea of being in a Jewish family.

According to very well-placed sources, Ivanka was diligent in her preparation for conversion, and she has continued to take Jewish observance very enthusiastically and very seriously.

Apparently, the Kushners "do" Shabbat and take their children to a Jewish school.

Yes, you will say. But...does she live up to Jewish values?

My tentative answer: Some, apparently. Not all.

At least, not all of the values according to the way that many American Jewish interpret them.

A second answer: do any of us live up to all of those values?

So, yes, there are plenty of ironies here.

Despite his dog whistles and his apparent comfort with racists and anti-semites (and vice-versa).

In several years, he will be present at a bar mitzvah ceremony (bat mitzvah, too -- let us hope).

At which point, I will say mazal tov.

You want to talk about the unpredictable nature of American Jewish life?

Donald Trump has Jewish grandchildren -- and Bernie Sanders does not?

To quote yet another ancient sage: "I have seen a world turned topsy-turvy."

Related Posts
By Emily McFarlan Miller, Jack Jenkins
Jerry Falwell Jr. taking indefinite leave of absence from Liberty University amid calls to step down
By Thomas Reese
Catholic bishops reprimand Trump as often as they praise him
By Jim Wallis
Reopening schools for all the wrong reasons
By Amy Klein
What good is faith when your fertility treatments aren't working?
By Julie Ingersoll
Behind Trump's push to reopen schools, a gift for Bible-based education