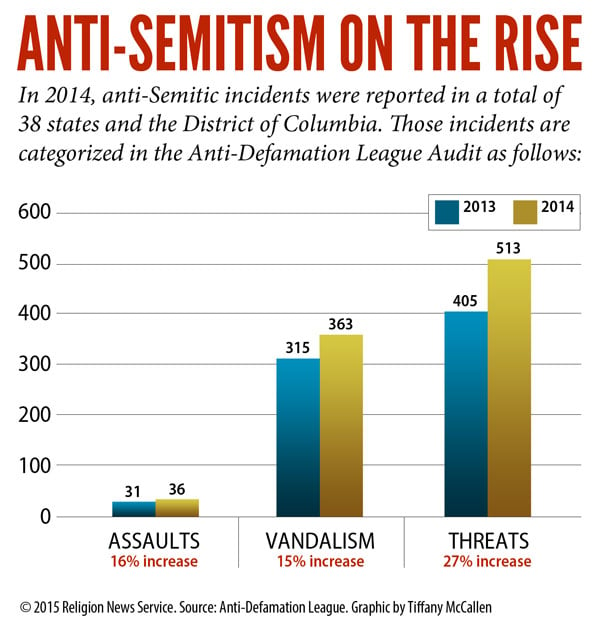 This Hanukkah, there is a new game that you can play with your friends and family.

”Who has a bigger problem with anti-semitism — the Right or the Left?”

Because everyone seems to be playing it.

It is really quite easy to play.

Simply look at the various varieties of Jew-hatred emanating from the end of the political spectrum that you disagree with, and argue that they are the most grievous offenders.

Actually, you probably already played this game when you were young.

It was called “twister.”

As in: the attempt to twist your body, and your mind, into uncomfortable contortions of rationalization.

Consider a recent article in the Forward by Dove Kent. He argues that the accusation of anti-semitism on both sides of the political and cultural divide is inappropriate, that the vituperation and violence coming from the right is far more threatening than that which comes from the left.

“Anti-Semitism may appear in certain tangential strands of U.S. leftist ideology but it is certain not its animating force. Indeed it is almost universally understood to be antithetical to our social justice movements.”

In one sense, he is not wrong. The history of leftist ideology is spotted and stained with anti-semitic motivations. Check out the late, lamented Robert Wistrich on this. But, it has not been as dominant on the left as it has been on the right.

And yes, the sheer number of right wing extremist hate crimes and violence certainly dwarfs the number that have come from the left.

But, consider the words of the indefatigable Deborah Lipstadt.

For the past few decades, we have witnessed the rise of anti-Semitism from the left. From Jeremy Corbyn’s Labour Party in the United Kingdom to college campuses across America, the phenomenon is real, and it is dangerous. Yet, all too often, some Jews — both individuals and organizations — who inhabit the liberal or left end of the spectrum have tried to explain it away with the classic “yes/but” rationalization: “Yes, it’s wrong, but if only Israel would… then the anti-Semitism would disappear.” Maybe their fear of losing their left-wing bona fides blinded them to the fact that the only proper response to prejudice of any kind — anti-Semitism included — is unambiguous condemnation.

Deborah makes it clear: we need to condemn anti-semitism on all sides. Every manifestation of Jew-hatred is dangerous.

I will now suggest that, in some ways, the anti-semitism of the Left might actually be more dangerous, and more insidious, than that of the Right.

The violence is verbal, and often comes in the form of intellectual argument.

The problem? As we have seen, hateful ideologies and hateful words have a way of metasticizing into violent acts.

Second, the anti-semitism of the left rarely comes in the form of “I hate the Jews!” It usually comes out as “I hate, or have great difficulty, with Israel and Zionism.”

Want to have real fun at your Hanukkah party? Debate whether those sentiments are a form of anti-semitism or not.

My quick answer: if people want to criticize Israeli policies, go ahead — be my guest. Why should Israelis have all the fun?

The problem? This gives far left critics of Israel plausible deniability. “I don’t hate the Jews; I hate Israel.”

The bigger problem? Many of us buy that argument — forgetting, for a moment, that our “friends” have just succeeded in pulling off one of the greatest moves in anti-semitic ideology: separating the “good” Jews (the liberals and leftists) from the “bad” Jews (Israelis).

The third reason why leftist anti-semitism is more insidious than its right wing version: It comes from people who are our social, intellectual, and cultural peers.

It comes from people whom we would normally want to like and admire — professors, college students (like those who daubed the office of a Columbia University Teachers College professor with swastikas), rock stars like Roger Waters, and British politicians.

And, once again, when those people criticize Israel and Zionism, we are far more reticent to criticize their criticisms.

Forgetting, of course, that leftist criticisms of Israel and Zionism have never cared that much about who the current prime minister is.

For these reasons, the anti-semitism of the left comes in the form of a paper cut. You don’t even realize that you’ve been wounded until you see the tiny drops of blood.

Let me conclude with this historical reflection.

Some of my friends and colleagues are quick to dismiss, rationalize, or entirely ignore the Jew-hatred that comes from, say, Louis Farakkhan.

Because, they say, he is politically powerless.

This is a myopic position.

As Arthur Waskow said, decades ago, Jews have lived with a fear of the Tsar, and fear of the peasants. In many ways, the most dangerous manifestations of anti-semitism have come not from the powerful (who often tried to keep a lid on popular and populist manifestations of Jew-hatred), but from the powerless — especially those who have economic grievances to nurse. Consider the history of Eastern European anti-semitism.

As Hanukkah approaches, let us remember that anti-semitism is often subtle; masked in intellectual discourse; all too willing to exclude the “good” Jews from the “bad” Jews — and that, when it comes, it comes from all sides of society.

It is incumbent upon all of us to shatter the darkness with our light.

Related Posts
By Michael Kunzelman
Report: Anti-Semitic incidents in US hit record high in 2019
By Karen Matthews
NYC mayor takes heat after lashing out at Jewish funeral
By Yonat Shimron
Survey: Half of American Jews have experienced or witnessed anti-Semitism
By Jason Byassee
Palm Sunday: The most anti-Semitic time of the Christian calendar
By Jack Jenkins
Jewish leaders: Nazi flag at Sanders rally further proof of rise in anti-Semitism