BELLINGHAM, Wash. (RNS) — Whales are a staple in the waters off the Pacific Northwest.

The local culture is so wrapped up in a whale identity that Seattle’s metro bus cards are called “orca” passes for the type of whale also known as killer.

“I believe we have orcas in our soul in this state,” Washington Gov. Jay Inslee said last spring.

And the native tribes see them as spiritual relatives.

That’s why not only the locals but also people around the world were transfixed for 17 days this past summer as a 20-year-old orca — known as J-35 or Tahlequah — birthed a calf, only to see it die a half-hour later. When The Seattle Times asked for reaction, more than 1,000 people responded, expressing their grief through poems, art, even a killer-whale ballet.

Then J-50, another female orca, died of starvation from a shortage of chinook salmon in overfished Puget Sound. The publicity led to demands that four dams on the Lower Snake River be removed to increase migrating salmon runs and that water levels increase to save the local group of orcas from extinction. Only 74 are left, and the prognosis for their survival is poor.

Few take their plight as personally as the Lummi Nation, one of several coastal Indian tribes that occupy land from British Columbia south to Oregon. Their 21,000-acre reservation stretches across the western flank of Bellingham, Wash., a city just south of the Canadian border. 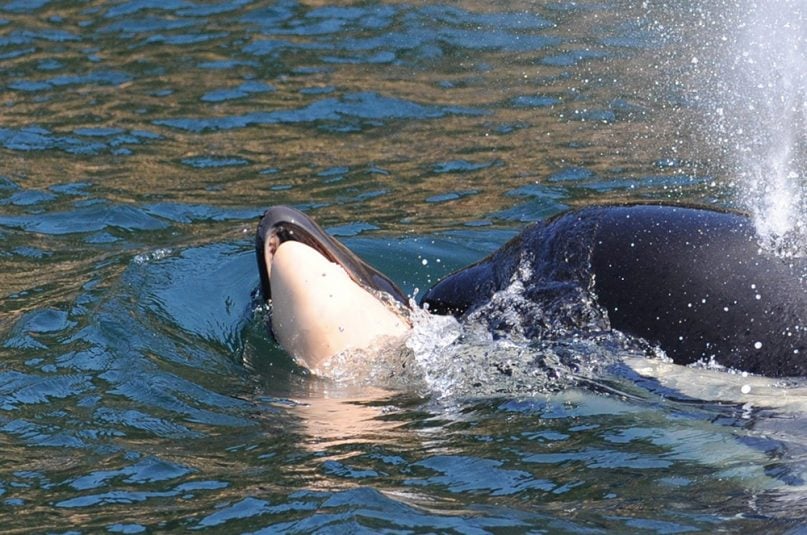 A female orca, right, known as J-35 or Tahlequah, is seen pushing the body of her dead newborn calf in the Salish Sea on July 25, 2018. Photo courtesy of Ken Balcomb, Center for Whale Research

The Lummis refer to the whales as “qwe lhol mechen,” or “people that live under the water.” The tribe sees the whole Tahlequah affair as a wordless warning from the whales that, environmentally, time is running out.

“These are their relatives under the water going extinct,” said Kurt Russo, a non-Lummi who is a senior strategist for the tribe’s Sovereignty and Treaty Protection Office. “This is a fight for their relatives. This is our sacred obligation.”

The Tahlequah drama is simultaneous with the tribe’s campaign to force a seaquarium 3,000 miles away to return its prize performing orca to the waters where she once lived — among the San Juan Islands, an archipelago in Washington state.

It was among those island waters — specifically Whidbey Island’s Penn Cove — that a few dozen orcas were snatched in the summer of 1970 and sold to various theme parks, decimating the gene pool of remaining whales. The event, which involved planes and explosives and resulted in the deaths of five whales, infuriated local residents. Since then, all the whales captured that summer have died except one. 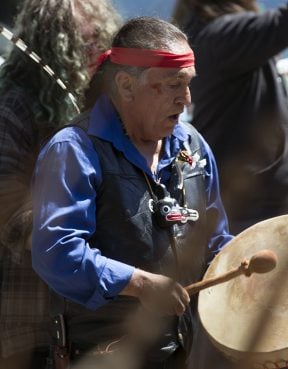 The tribe calls her Tokitae. And now they’re redoubling their efforts to return her to the native waters of the Salish Sea to be reunited with her mother. An exhibit that opened Saturday (Dec. 8) at the Florida Museum of Natural History in Gainesville tells her story.

Tokitae was captured Aug. 8, 1970, as a 4-year-old, then renamed Lolita by her new owners at the Miami Seaquarium. The now-52-year-old orca has been the subject of numerous efforts — including those of a former Washington state governor, the mayor of Miami Beach and the Miami Beach city commission — to get her back to the waters of Puget Sound.

“Tokitae is a symbol of a relationship we’ve condoned,” said Jewell Praying Wolf James, the master totem carver for the Lummi Nation who wears a black hoodie decorated with a stylized red and white orca. “Here’s a being who used to roam the waters who’s now enclosed in a tank that’s always in the sun.”

James is one of the more public voices for the Lummis. His 16-foot totem of the hapless Tokitae made a national tour last spring in an effort to pressure the Seaquarium to release the whale. The totem, painted in black, white, red and blue, shows the whale with a large blue oval and a mouthful of bared teeth. A male figure sits atop the figure to symbolize how the tribe had married into the whales and became one of them so as to bring whales into the human family.

Bellingham Unitarian Fellowship held a dedicatory service for the totem May 9 before a trip by a car caravan from Washington state to Miami. A Lummi demonstration in front of the Seaquarium on May 27 later got no response from officials there other than to say Lolita is safe where she is. The totem pole of Tokitae, or Lolita, is parked in front of the Miami Seaquarium in May 2018. The orca Lolita has been in captivity since 1970. Photo © Paul Anderson

Her story is a 21st–century version of “Free Willy,” the 1993 film that ramped up support for the freeing of Keiko, a killer whale trapped in a Mexico marine park. Keiko was eventually freed in 2002, but, unable to contact the whale pod in which he had been born, died a year later.

The Lummis won’t give up until Tokitae too is back in their ancestral waters where her whale pod — led by Tokitae’s mother — still swims. The National Oceanic and Atmospheric Administration says orcas typically live 50-60 years in the wild, but it’s not unusual for females to last up to 80-90 years.

Meanwhile, the Tokitae/Lolita drama might have slipped away unnoticed had it not been for the Tahlequah drama that captivated the media in July and August.

On Oct. 9, the U.S. Court of Appeals for the Eleventh Circuit, which includes Florida, rejected a petition to reopen a lawsuit to get the Seaquarium to release the whale. The ruling sentenced Lolita to “a lifetime of physical and psychological harm,” said Jared Goodman, general counsel for the People for the Ethical Treatment of Animals.

“If you were to be outside the Miami Seaquarium most nights, you can hear her calling,” Russo said. “She has called every night for 47 years. If you were to hear her mother’s call, they are identical. They are telling us something.” 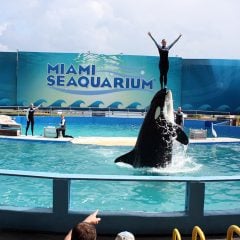 Lolita performs a show at Miami Seaquarium in 2011. Photo by Leonardo DaSilva/Creative Commons 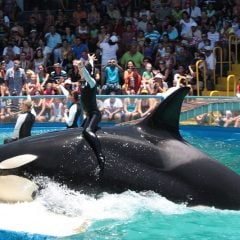 Lolita the whale performs a show with staff at Miami Seaquarium in 2009. Photo by Isabelle Puaut/Creative Commons

Unitarians and others religious groups have backed the Lummis. Unitarian Universalist congregations are based on seven principles, “four of them having to do with social and environmental justice,” said Deb Cruz, a member of the Bellingham Unitarian Fellowship and president of Justice Washington, a state action network involving social justice issues.

Tribal members haven’t forgotten the days when Indian children were sent to boarding schools in Salem, Ore., and Lynden and Everett, Wash., in the early 1900s. They were forbidden to speak their tribal dialects and by the 1980s, certain Coast Salish languages were almost extinct. They have been reclaimed only through extensive efforts by the tribes.

Tokitae is seen as a modern-day “child” undergoing the same exile that Indian children once did and to this day, her removal from Puget Sound is referred to as an “abduction.”

“For the Lummis, it’s like your cousin is in captivity,” said Jessie Dye, program and outreach director for Earth Ministry, a faith-based environmental stewardship and advocacy nonprofit in Seattle. “You want to get her out.” 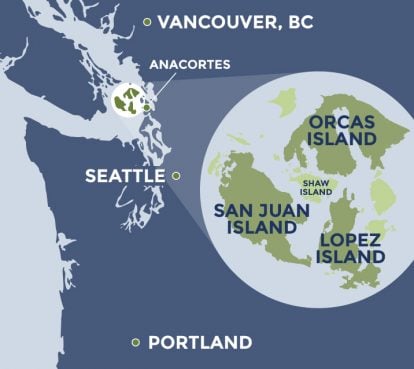 A map of the San Juan Islands in the Salish Sea. Image courtesy of Creative Commons

Dye has helped round up support for coastal tribes among the 500 member congregations of Earth Ministry, but faith groups haven’t always been so responsive. It wasn’t until 1987 that bishops and denominational executives around the Pacific Northwest offered a public apology to Coast Salish tribes for taking part in the destruction of Native spiritual practices. In 1997, they reaffirmed that apology.

“One of the reasons we have this collaboration is the tribes — as much as they’ve been harmed by the Christian community — speak the same language,” she said. “They too talk of a Creator. Every religious denomination in the Abrahamic traditions speaks on stewardship. Not one of them would say letting a species such as the orca go extinct is good stewardship of God’s creation.”

Dye has gathered more than 100 signatures from religious organizations across the region for an orca task force convened by the governor earlier this year. The most radical short-term fix would involve removing four to six dams across the state.

Orcas feast on adult chinook salmon, whose numbers in the state’s rivers have dropped by at least half in the past 25 years. Dams block the journeys of young salmon from their spawning beds inland to the ocean and then back to Puget Sound. One reason Tahlequah’s baby may have died is that the mother was underfed and her calf was born malnourished.

It might take only a few months to dismantle the dams, but that solution pits the tribes, many scientists and western Washington residents against farmers in eastern Washington who oppose the dams’ removal.

Russo, the tribe’s senior strategist, believes the return of Tokitae would be a needed shot in the arm not only for the dam removal movement but also for the whales themselves.

“There is going to be a moment in the future when Tokitae is going to be out from her sanctuary and she will have echolocated her mother, and Tokitae and her mother are going to break through the water together,” he said. “That’s what they do when they have a reunion. This is a spiritual undertaking. It’s not just about bringing a whale home. This is about reunion and remembrance and healing.” 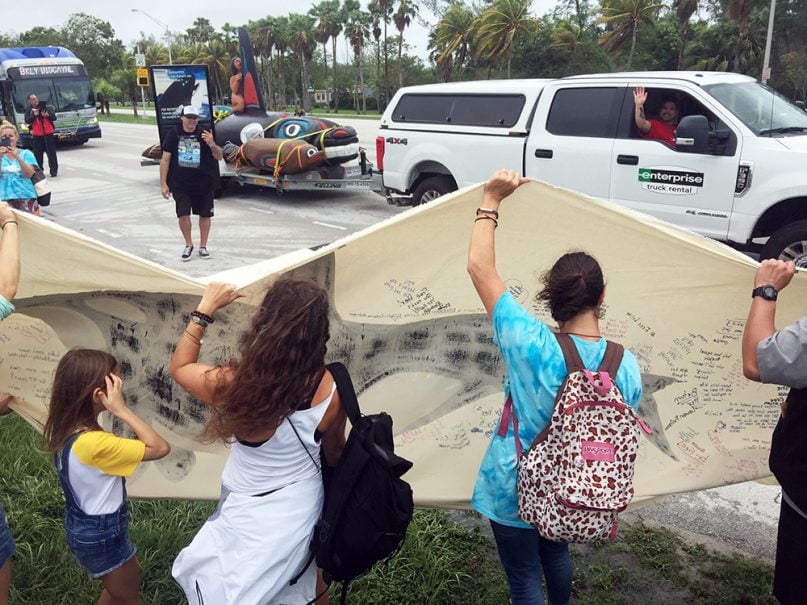 Demonstrators welcome the totem pole of Tokitae, or Lolita, with a sign as it arrives at Miami Seaquarium on May 27, 2018. Photo © SacredSea.org

(An exhibit and film presentation on orcas runs through May 5, 2019, at the Florida Museum of Natural History in Gainesville. The totem pole of Tokitae, carved by Jewell James, will be displayed and a floor-to-ceiling video will feature underwater footage of the orca, along with the voices of Lummi elders. )