(RNS) — Do you believe astrology governs your love life? Do you think some people have extraordinary powers of perception that allow them to predict the future? Do you hold that some items – such as crystals – possess special spiritual energy? Do you believe in the concept of past lives?

If you answered “yes” to one or more of these questions, you’re far from alone. According to an October Pew Research Center poll, about 62 percent of Americans believe in at least one of four beliefs the poll classifies as “New Age.”

The poll’s methodology lends itself to criticism — reincarnation, for example, is part of some well-established organized religious traditions, such as Hinduism, and hardly a New Age concept — but the numbers are nevertheless strikingly high.

Striking, too, is the consistency of these beliefs across religious lines. About 6 in 10 religious “nones” affirmed at least one New Age belief, including a full 78 percent of those who believe in “nothing in particular.” Sixty-one percent said “spiritual energy can be located in physical things” and 51 percent affirmed reincarnation.

The same ratio held for self-identified Christians, with Catholics and members of historically black Protestant churches expressing greater belief in New Age ideas – 70 percent and 72 percent, respectively — than other groups. Fewer than half, or 47 percent, of evangelical Christians did.

The least likely to affirm any of these beliefs were committed atheists; just 22 percent said they believed in any at all. 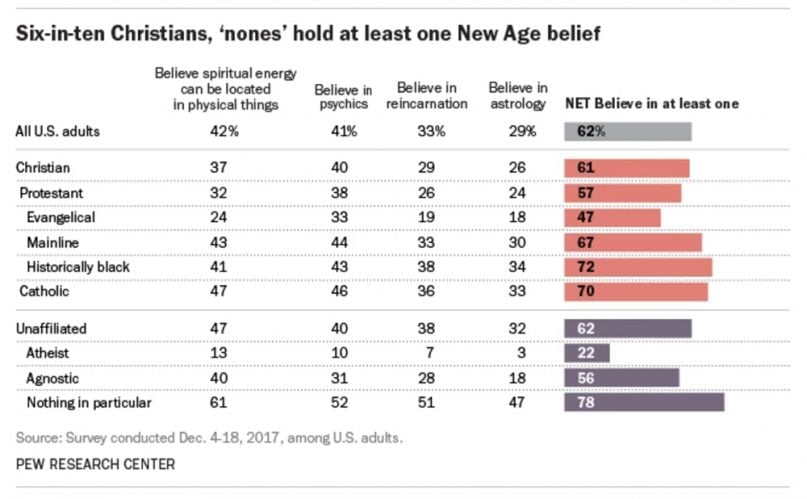 The poll received relatively little media attention at the time. But the data it represents tells us much about how complicated it has become to know what a person of any given religious identity actually believes. What does it mean to self-identify as a Catholic if 36 percent of American Catholics do also affirm the reality of reincarnation, a concept completely at odds with traditional Catholic doctrine?

What does it mean to proclaim oneself an atheist, and yet believe – as 11 percent of atheists say they do – in “spiritual energy”?

Two truths help explain this seeming discrepancy. The first is the degree to which religious faith should be seen as a marker of social identity as much as a metaphysical system. To be a “cultural Catholic,” say, or a “cultural Jew” is to align with a group as much as it is to assent to a set of philosophical or spiritual propositions, and to say you are one or the other is increasingly more about your chosen community than about what you believe.

(This was particularly true in 2018, as religious identity and political identity have become increasingly fixed, with right-leaning white evangelicals and left-leaning nones alike virtually immobile in their perspectives on Donald Trump).

The second truth is that Americans have come to see their spirituality as something to construct, rather than to adopt. “Cafeteria Catholic” was originally a slur meant to disparage someone who conveniently picked and chose among Roman Catholic teachings. But the current religious landscape rewards such individualization. It makes perfect sense that we would curate our religious self-conception the same way we personalize and silo our news and information sources on our Facebook and Twitter feeds. Our foundational rites of passage – from weddings to funerals – have become increasingly secular. Just 22 percent of weddings happen in a house of worship, while almost 30 percent of Americans anticipate a secular funeral. They are also increasingly individualistic: We tailor our own vows, structuring our ceremonies around individuals rather than traditional liturgies. One woman I interviewed for my forthcoming book told me she had similarly “created” her “own religion” by mixing and matching traditions, images, symbols and language that she felt were personally meaningful to her.

It’s worth asking, of course, whether it’s the public visibility of these individualized belief structures that has increased, rather than their existence. Historically, syncretic and diffuse “folk religion” – whether in medieval Catholic Europe or 19th-century Louisiana – has been a far more fluid entity than most doctrinal systems would admit. Either way, the marked rise in the formal expression — and monetization — of these beliefs is inarguable.

That commercial aspect is perhaps the strongest way that New Age beliefs are becoming communal. The Pew data cited above shows that American women affirm at least one New Age view far more than men do – 69 percent versus 55 percent. This may reflect, at least in part, the fact that New Age products and ideas, such as crystals or astrology, are much more heavily marketed to women.

In this way, we’re seeing folk religion – once relegated to largely domestic if not totally private spaces — enter the public sphere. Now, it’s entering the religious marketplace as well.