CHICAGO (RNS) — The Rev. Myron McCoy is looking for a miracle.

Or maybe a few of them.

McCoy, senior pastor of the historic First United Methodist Church at Chicago Temple, dreams of the day when the church, which predates the founding of Chicago, will be filled with disciples ready to transform the world.

He also dreams of an end to what he called “exclusionary” language toward LGBTQ United Methodists in the denomination’s Book of Discipline.

Both require divine intervention, he said in a sermon about the wedding at Cana — in which Jesus turns water into wine — during a service on a recent wintry morning in Chicago.

“Believe in the miracle, and God can perform it today,” he said in the Jan. 20 sermon. 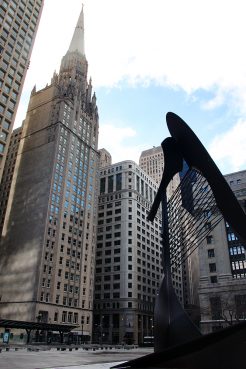 McCoy soon may know if one of his prayers will be answered.

Next week, United Methodists from around the world will gather in St. Louis for a special session of the church’s General Conference.

United Methodists are looking to the meeting of the denomination’s decision-making body, which begins on Feb. 23, to end a decades-long stalemate over the status of LGBTQ church members.

Its Book of Discipline currently states that “the practice of homosexuality is incompatible with Christian teaching” and that “self-avowed practicing homosexuals” cannot be ordained as ministers, appointed to serve or be married in the church. But United Methodists have been divided on their beliefs about sexuality since the 1972 General Conference added that language to the denomination’s rulebook.

At a contentious General Conference in 2016 in Portland, Ore., delegates voted to defer any decisions regarding sexuality to a commission, later appointed by bishops, called the Commission on a Way Forward.

Delegates to the St. Louis meeting will consider these plans and at least two others — including one called the Simple Plan, which would strike the language about sexuality from the Book of Discipline.

Headed into the meeting, LGBTQ-affirming United Methodists are divided over which plan to support — and what they’ll do if the Traditional Plan passes.

“We have talked about the plans. We have tried to give the information,” said Peg Isaacson, chair of the Reconciling Ministries Task Force at First United Methodist Church.

“But until we know what’s really going to happen, we didn’t want to be doom and gloom — because we’re hopeful.” 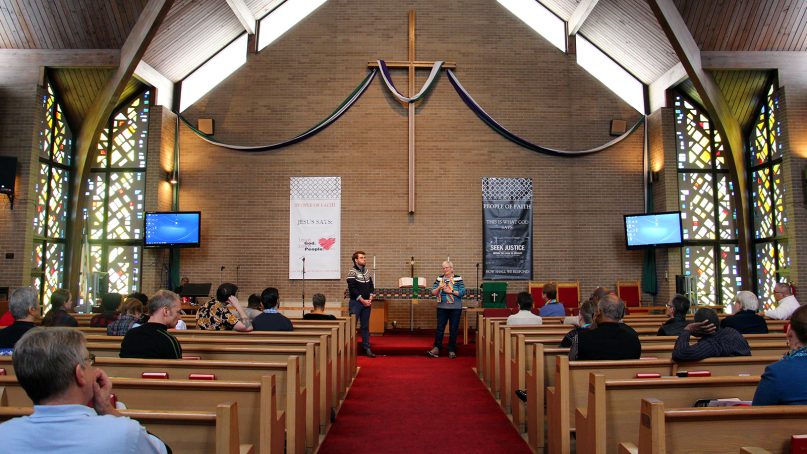 Rev. Sally Dyck, bishop of the Northern Illinois Conference of the United Methodist Church, said the denomination has been working to explain those plans to its members — but nobody knows what will happen at the meeting, what plan will win approval or how it might be amended.

“Most likely, it will not be full inclusion for everybody everywhere, and that makes us sad and still creates pain,” she said. “But in many places such as Northern Illinois, there can be open inclusion, and the One Church Plan would allow for that.”

That’s the plan Dyck is supporting, because she believes it would move the church forward. It’s also the plan the denomination’s Council of Bishops has recommended. 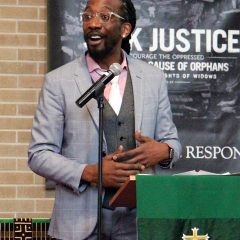 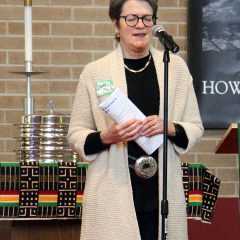 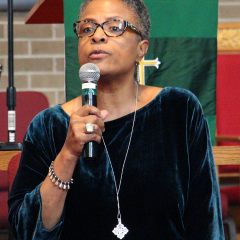 It’s possible the special session could be bogged down in the same petitions and points of order that have paralyzed past General Conference meetings.

But, the bishop said, “I just think a lot of people in the church really are praying that we can truly find a way forward where we could live together and be one body of Christ.”

Reconciling Ministries is a network of United Methodists that has advocated for LGBTQ inclusion in the church since the 1980s, which counts 961 churches and other groups and more than 35,000 individuals among its supporters, according to its website.

Not surprisingly, talk about the special session dominated the gathering. 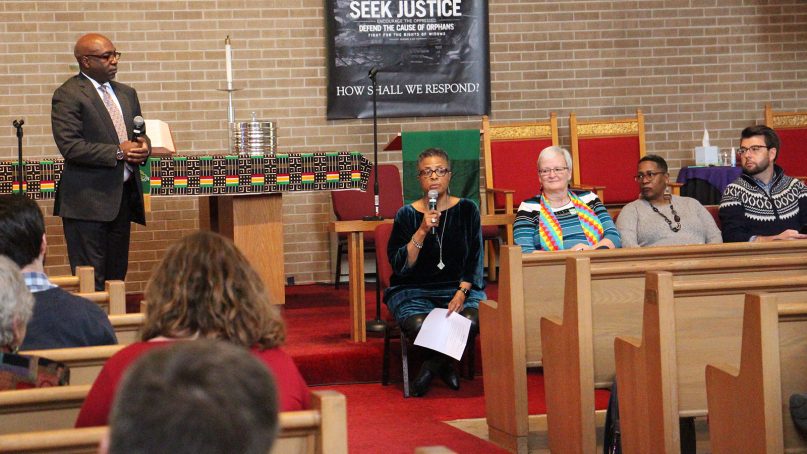 Williams advocated instead for the Simple Plan, which he said embodies the “love ethic” of Jesus and affirms the humanity of LGBTQ people.

After showing a reenactment of Sojourner Truth’s famous speech asking, “Ain’t I a woman?” the pastor referenced his own baptism and confirmation and shared his story of coming out to his congregation. 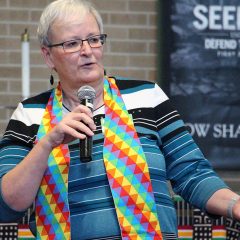 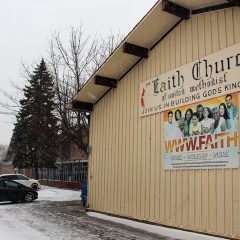 Jan Lawrence, executive director of Reconciling Ministries, shared plans to pack the special session with observers wearing rainbow stoles as a sign of support for LGBTQ inclusion. The group also plans to greet delegates each day with a kind word and smile and to invite all to worship together after the meeting has ended, whatever the outcome.

“Protest also is an act of love,” pointed out Rev. Pamela Lightsey, vice president of academic and student affairs at Meadville Lombard Theological School in Chicago.

Rev. Gregory Gross, a General Conference delegate and organizer with the Queer Clergy Caucus, said his goal for the special session is “liberation and justice for queer people.” At the very least, he hopes to stop the Traditional Plan, which he said is “evil and hurtful, and it kicks me out of the church for who I am.”

“At what point do we turn the tables and walk out?” he said.

Reconciling Ministries hasn’t decided what to do if the Traditional Plan passes, according to Lawrence. But its board has committed to remaining advocates for LGBTQ people in the church, no matter what happens, she said.

And she sees it as “a hopeful time at Reconciling Ministries Network.”

“It’s a time of renewal. It’s a time of planning for the future,” she said. “So, on top of the tension that everybody feels, there’s a lot of hope.”

After the Jan. 20 church service, First United Methodist’s Social Justice Committee gathered in the church basement over pizza to talk about the upcoming special session and to discuss what they’d learned at the Winter Warming event. 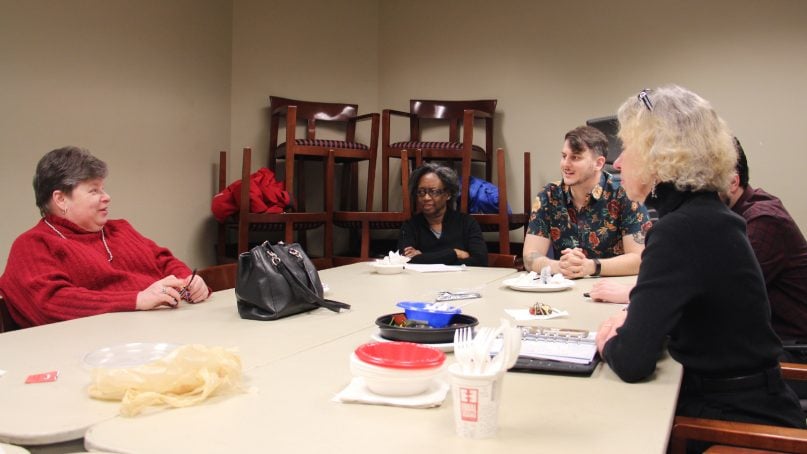 First United Methodist is the oldest church in Chicago, according to its website. It joined the Reconciling Ministries Network in 1996 and decided to allow weddings for same-sex couples after the state of Illinois made it legal in 2014.

Today, it’s one of the largest congregations in the Northern Illinois Conference, with 532 members, active music and justice ministries and a rapidly growing Stephen Ministry that trains laypeople to provide support to those going through difficult times, according to the Rev. Wendy Witt, the church’s associate pastor.

Isaacson, the church’s Reconciling Ministries chair, said her takeaway from the Winter Warming event was the importance of standing up and being counted in support of the Simple Plan.

But Piers Fetters, manager of family ministries at the church, joked that the plan could become the “Jill Stein” of the special session, drawing support away from the One Church Plan.

Witt encouraged the committee to pray and talk and think about what the church should do following the special session if the outcome isn’t what they hope.

If the Simple Plan or One Church Plan passes, “virtually nothing changes” for the Reconciling congregation, Witt said. But if the Traditional Plan passes, she said, the congregation has “some major decisions to make.”

They haven’t decided yet, Isaacson said, “because we don’t want to see the church split up.

“We just want to see things being done the way Christ expects us to do, and we are not drawing lines in the sand and saying if we don’t get our way, we’re walking.”