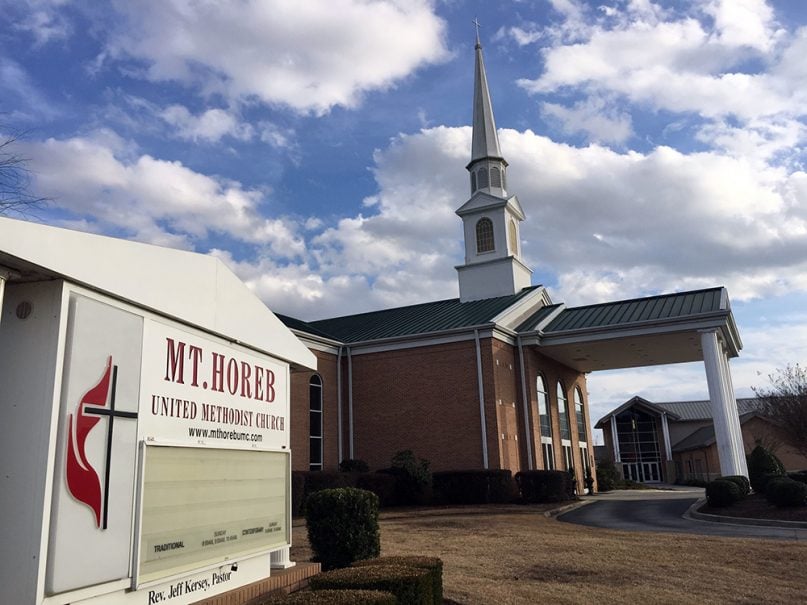 LEXINGTON, S.C. (RNS) — The Rev. Jeff Kersey looks out over his massive church complex — 70 acres in all — and calls it The Promised Land.

Every Friday morning, the senior pastor of South Carolina’s largest United Methodist church walks the property with a group of men to pray over Mt. Horeb, its leaders, its message and its people.

Those prayers could soon put Kersey and his church — a thriving congregation with a $5 million annual budget —  at odds with the nation’s second-largest Protestant denomination.

Later this month in St. Louis, a special session of the United Methodist Church’s legislative assembly may vote on whether to drop language in its rulebook that bars “self-avowed practicing homosexuals” from being ordained as ministers and forbids ministers from officiating at same-sex weddings.

If it does, Mt. Horeb, a conservative evangelical church in the heart of South Carolina, 17 miles from Columbia, the state capital, will likely cut the cord.

And the denomination, which claims 7 million members in the U.S. and 12.5 million worldwide, will lose one of its most flourishing churches.

Three years ago, Mt. Horeb built a $17 million auditorium, replete with state-of-the-art audiovisual capabilities and ringed with private prayer rooms where ushers offer one-on-one intercessions for those who need it.

The congregation finished 2018 with $2.4 million over budget. It has multiple ministries dedicated to reducing poverty in the town of Lexington. And last month, when it asked 500 members to sponsor a child in a developing country, 700 signed up.

Among its members are former South Carolina Gov. and U.N. Ambassador Nikki Haley, who during her tenure as governor opposed gay marriage.

“Our church is thriving and growing in incredible ways because we’re faithful to Scripture and welcoming people and fulfilling the mission of God here,” Kersey said.

Mt. Horeb — the name refers to the mountain Moses descended from with the Ten Commandments — is one of many Methodist churches facing a momentous decision. People head toward the exit through the central hallway at Mt. Horeb United Methodist Church. RNS photo by Yonat Shimron

If the General Conference votes to allow individual churches to ordain and marry LGBT people — the so-called One Church Plan — more conservative churches will likely bolt. If the assembly votes to keep or strengthen the prohibitions on ordination and marriage — the so-called Traditional Plan — liberal churches may back away.

Regardless of how the vote goes, churches on either side are ready to walk.

“I have publicly on many occasions said that both sides tend to underestimate the strength of the other,” said Bishop Mike Lowry of the Central Texas Conference of the United Methodist Church in Fort Worth.

Many expect the conference to be a turning point in the history of the denomination, founded in 1968 through the union of the Evangelical United Brethren Church and the Methodist Church.

Already, an organized conservative group is waiting in the wings. The Wesleyan Covenant Association is openly working to separate from the denomination if the rulebook is amended.

The group’s website describes the WCA as “a landing place” for congregations that want to maintain “an orthodox, Wesleyan Christianity.”

Some 1,500 United Methodist churches — nearly all of them in the U.S. — have joined the WCA, including Mt. Horeb.

While that’s a fraction of the denomination’s 44,000 churches worldwide (31,867 in the U.S.), many more disaffected congregations may join once the special session concludes.

Members of the WCA say they value doctrine above denominational loyalty. And that doctrine, outlined in the denomination’s Book of Discipline, holds that the “practice of homosexuality is incompatible with Christian teaching.”

Holding fast to that doctrine is one of the reasons Kersey thinks Mt. Horeb has been so successful: It has remained true to Scripture amid rapid societal change.

Kersey argues that a slide away from orthodox Christian tenets is one of the reasons for the decline of mainline denominations — most prominently the United Methodist Church in the U.S.

A 2012 study by Donald R. House found that while the United Methodist Church has suffered through decades of declining worship attendance, the rate of decline has increased markedly since 2002. By 2030, an estimated 30 percent of the denomination’s churches — or about 10,000 congregations — may close.

Mt. Horeb appears to be bucking those trends. In November, with the blessing of his leadership team, Kersey sent out a congregation-wide letter explaining the various plans that will be up for a vote at the special session and declaring his support for the Traditional Plan, which would keep LGBT restrictions in place.

Out of a membership of close to 5,000 people, Kersey said he received three emails from people who said they disagreed with him.

Martha Thompson, who chairs the church’s leadership team and is a delegate to the special session in St. Louis, said she welcomed the letter.

“This was new to a majority of our membership. So I was glad Jeff did it,” she said. “There were some who weren’t in favor. But the overwhelming majority of people I’ve spoken to were glad that he did it.”

Thompson cited the success of the monthlong Advent offering after the letter was sent as proof of the congregation’s support. The church raised $313,000 for that one offering — more than many small Methodist churches’ entire yearly budget.

Both Thompson and Kersey said they don’t want to exclude anyone.

Kersey said he recognizes that there are LGBT people attending the church and said he sees them like he sees everyone else — as people of sacred worth.

“On any given weekend here, we see people struggling with adultery, pornography, same-sex relationship,” he said. “We don’t ask questions. Everyone is welcome to come here with the understanding that we’ll share with them God’s best plan for their life, which is based on our understanding of Scripture.”

RELATED: United Methodists should acknowledge reality that they are no longer united (COMMENTARY)

So far, Mt. Horeb has not taken any concrete steps to sever ties to the United Methodist Church.

Unlike some conservative churches that have withheld their allotted annual dues to the denomination, called apportionments, Mt. Horeb has faithfully paid its share (about $403,000 last year).

This weekend, the church will host some 600 United Methodists for a statewide men’s retreat. As the largest church in the state conference, it also has one of the best facilities — not to mention a ready supply of volunteers who will greet and serve participants at the meeting.

But in subtle ways, the church is readying for a split.

Though the large marquee outside the church still bears the flame and cross — the trademark symbol of the United Methodist Church — a recent website upgrade does not. The website features a mountain range, or a slanted letter M, as its logo.

The church no longer flies the United Methodist flag. And recently it dropped the flame and cross from its weekly bulletins handed out at its four Sunday services — two traditional and two contemporary.

Church leaders point out that any decision about parting from the denomination would need a two-thirds vote of the membership. Then there are thorny property and pension considerations to be worked through. (Some clergy and laity have called for a “gracious exit” plan that would provide guidelines for churches transitioning out of the denomination.)

Another group has also pleaded with delegates to the St. Louis session to defer any exit plans until after the denomination’s next regular quadrennial general session, in 2020.

But for some, the decision to leave seems just a matter of time.

“I think Mt. Horeb is getting ready to do it,” said Thompson. “That’s the direction our church is going.”