(RNS) — Three-year-old Crew Long has been gone a little more than a year and a half.

But his mom still talks to him.

Sometimes Mandy Long speaks to her son, who died on Sept. 18, 2017, through prayer or in her journal. Other times she posts notes to her son on her family’s Facebook group page, Crew’s Crew.

The interweaving of social media into our daily lives is changing the way we mourn our dead.

Grieving is no longer a private process, shared with just friends and family members during a wake or funeral. Today, we also reach out to our community of friends and family worldwide for solace on Facebook or Instagram or Twitter.

We may even mourn people we’ve never met — celebrities we watched on television as kids or favorite rock stars whose music marked points in our lives. This was the case recently when former “90210” TV star Luke Perry died. His Facebook page quickly filled with hundreds of mournful tributes, many of them speaking directly to him.

“The question at the time was why would you do that for a dead person?” said Glenn Sparks, who studies social media and mourning trends as a professor in the Brian Lamb School of Communication at Purdue University. “Once we become attached to celebrity characters, and when they die and have funerals, we can’t participate in the mourning events, and that’s why many people join — to feel connected. There’s a greater need to feel that we’re part of that larger community.”

Changes to social media policies also mean that our dead remain with us longer, at least online.

In 2014, Facebook changed its policies on the visibility of members’ accounts after their deaths, making it easier for friends and family to share memories for a longer period of time on that person’s page.

On Instagram, members have founded accounts such as @Griefstagram or @Griefcast to publicly document mourning or speak about death as a natural process and not something to be ashamed of or hide.

Kate George began @Griefstagram after her husband’s death at age 32. In an essay posted on Medium.com, George said the couple had shared most of the details of their life together online. 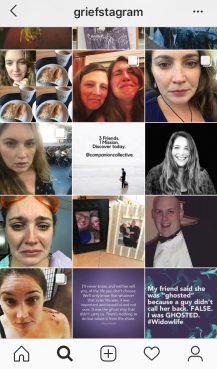 So posting about his death, even though it was difficult, seemed the right thing to do, she wrote.

“I had been nervous about sharing the news of his death, and the cause, but the response to my post about Eric’s death was overwhelmingly beautiful and celebratory of his life,” she wrote.

Memorialization and our initial visceral reactions to someone’s death are two types of traditional mourning practices that social media tends to amplify and digitize, according to Bonnie Stewart, an assistant professor of Online Pedagogy and Workplace Learning at the University of Windsor.

“Many cultures traditionally had specific mourning markers that bereaved families wore for a period after a death or restricted certain activities for a given timeframe,” she said. “In the absence of those, people in our own culture often turn to social media to express the deep and complex feelings that anniversaries of death tend to provoke … as ways of bearing witness to those who have gone.”

“No one sends sympathy cards anymore, partially because of social media. I think we see more death now because it isn’t just in the local newspaper,” she wrote on Facebook. “We see everyone’s loss of relatives all over the country, not just the ones here.”

When his friend Conrad died, North Carolina resident Jim Ware gained a sense of comfort from joining Conrad’s friends and family in posting memories, photos and music to a group page built in Conrad’s honor.

“He had been on social media long before I did. Then all of a sudden he dropped off, and that’s how we found out he died,” Ware said.

But for some, grieving in an open, public way is a privacy invasion. Texas resident David Caulkins said he left Facebook after the death of a high school friend. It was clear from posts about her that she had taken her own life. He was disturbed by people posting about how she died.

“I felt like this was the wrong way to recognize her passing, and as a distanced ‘FB’ friend, I felt like a voyeur invading her friends’ mourning,” he said.

Postmortem social media missives bothered Tommy Culver of Tennessee so much that he has a social media plan in place in the event of his death.

“I have given the passwords to my social media accounts to a couple trusted friends. If I haven’t already deleted all social media pages before I die, they have been instructed to delete them before my corpse is cold,” he wrote in a Facebook message. “There’s little I’ve seen more ridiculous than people posting on a dead person’s Facebook.”

She was grateful for the support of memories that family and friends shared after her mother’s passing.

“I received such encouragement and an outpouring of love from people in my circle when I posted pictures and memories of her,” Daley said. “I wish I had not deleted her page so soon after her death. I think I would still ‘communicate’ with her in some way if I had known to turn it into a memorial page.”

Despite some concerns, Stewart believes sharing about death online is a positive thing.

Social media, she said, has “brought conversations about grief — about how common some types of loss, like miscarriage, can be or how long grief can stay with a person after a loved one’s death — out into the open in ways we can all learn from positively if we choose to pay attention.”