In the four weeks since The Next Mormons was published, I’ve received a number of questions related to the research, many of which have to do with retention. How many people—especially young adults—are leaving the Church of Jesus Christ of Latter-day Saints, and why?

I’ve covered some of the “why” questions in other posts (see here and here), but right now I want to tackle the numbers issue.

There’s no one definitive study that can answer our questions about retention, so in the introduction to the book I triangulate data from three different sources to describe the changing landscape.

The most optimistic picture comes from data from the Pew Research Center, which has surveyed Mormons as part of its Religious Landscape Study in 2007 and 2014, as well as a separate and more focused study during the “Mormon Moment” in 2011–2012.

A less rosy picture emerges from the General Social Survey, which has been sampling Americans on demographic, political, and religious measures since 1973. According to research by Darren Sherkat, Mormons’ retention used to be fairly consistent for the Greatest Generation, Silent Generation, and Baby Boomers: about three-quarters of people who were LDS when they were 16 were still LDS when they responded to the survey as adults.

With Generation X we start seeing a drop (62.5%), and with Millennials the drop becomes sharper: for those born after 1981, the GSS finds only a 46% retention rate. That means that among people who said they had been LDS as teenagers, fewer than half still claimed the identity when they were surveyed as adults. 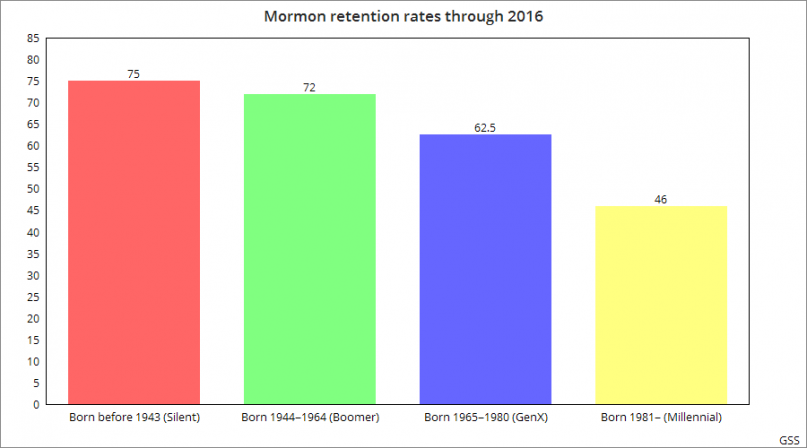 I point out in the book that the aggregated GSS sample as of 2016 only had 52 respondents in this post-1981 birth cohort of Mormons, which means we should be cautious about taking this single finding as gospel truth. Yet I also state that a shorthand tagline for understanding our current situation is that we used to keep about three-quarters of the young people who grew up in the Church, and now it appears to be closer to half.

Why am I giving credence to the GSS finding when Pew’s is marginally more positive and has a higher sample size of Millennials? Because of . . .

3. The Church of Jesus Christ of Latter-day Saints: %?

Research that comes out of the Church’s social science division is proprietary, meaning that it’s for internal use and is not available to researchers. However, Mormon Leaks published a video of a November 2008 meeting of top LDS leaders in which they discussed the problem of retention among young adults. You can read a summary of the meeting here or watch the video here. (As I said at the time, I have ethical problems with the public release of a video that was intended for private, internal use. But as a researcher, I also find the information valuable.)

The Church’s research demonstrated that:

The meeting did not offer a breakdown of how many Church members in their 20s were single versus married, so it’s impossible from just that information to gauge an overall retention rate for young adults in general.

However, the Next Mormons Survey can approximate this by looking at marital status among Millennials, who were between the ages of 18 and 36 at the time of the survey in 2016: 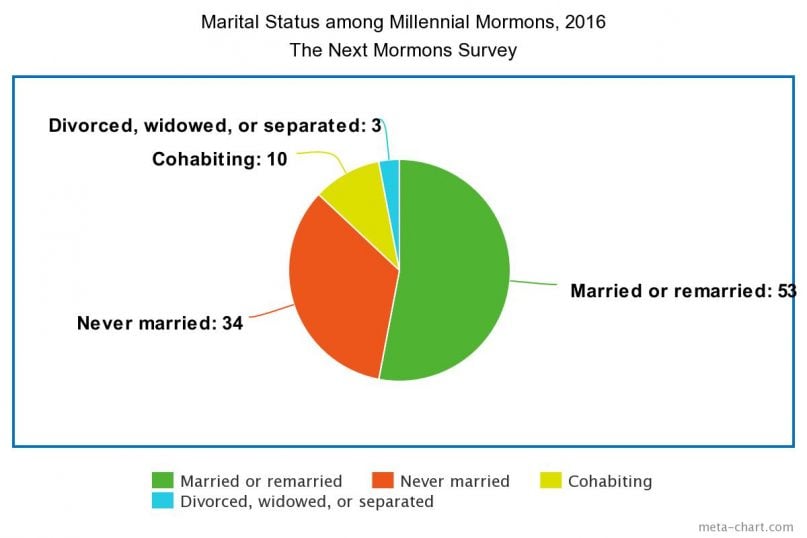 Simplified, this means that 53% of Millennial Latter-day Saints are currently married and 47% are not, out of a sample size of just over 400 from that generation. When we combine those proportions with the activity numbers from the Church, the numbers are strikingly similar to what the GSS has found: the combined activity rate for both married and single Mormons is 45.9%.

I’m aware that this is not a perfect comparison. The NMS is looking at people in their early 30s as well as people in their 20s, so presumably more of its respondents are married, which raises the activity rate overall. Moreover, its data was taken eight years later. Also, the Church calculates its activity rates as a proportion of all of the people on its membership rolls, while the NMS included only people who specifically self-identify as LDS, which is a smaller subsample.

Also, it’s unclear from the Church’s presentation exactly how it defines “activity” as opposed to “retention.” We don’t know for sure that all of those inactive members will eventually leave. And since I’m on a roll in finding problems, we don’t know the exact percentage of activity among married members in their twenties, other than that it’s twice that of the 30% given for single members. And here’s one more: the NMS canvassed only the United States, while the Church’s “North America” statistic would presumably also include Mexico and Canada.

So this is methodologically imperfect. Still, knowing this about the Church’s own statistics should make us far less quick to dismiss the GSS’s 46% retention rate as being out of the ballpark.

Do Mormons leave the LDS Church because they “got offended”?

Flunking Sainthood
Parent like your religion depends on it