(RNS) — When people were first confronted with the extent of Catholic priests’ sexual abuse of children, they were angry. But when, in the early 2000s, they learned that their bishops knew about the abuse and did little to stop it, Catholics and even the wider public were outraged.

As the crisis has rolled on, the demand that the bishops be held accountable for not reporting the abuse to the police, for keeping these priests in ministry and for not protecting children has become the focus of state and church inquiries, from the Vatican to attorney general offices across the U.S.

Many people, including myself and many survivors, would like to see these bishops thrown in jail.

The problem is that until recently, state and federal law did not require a bishop to report such crimes to the police. It is a general principle of common law that people are not required to report a crime of which they are aware.

Today, most states do make clergy mandatory reporters of child abuse, but that was not true when most of the abuse took place. As a result, it is difficult to prosecute bishops who governed prior to the mandatory reporting laws.

If the state can do little, what about the church? 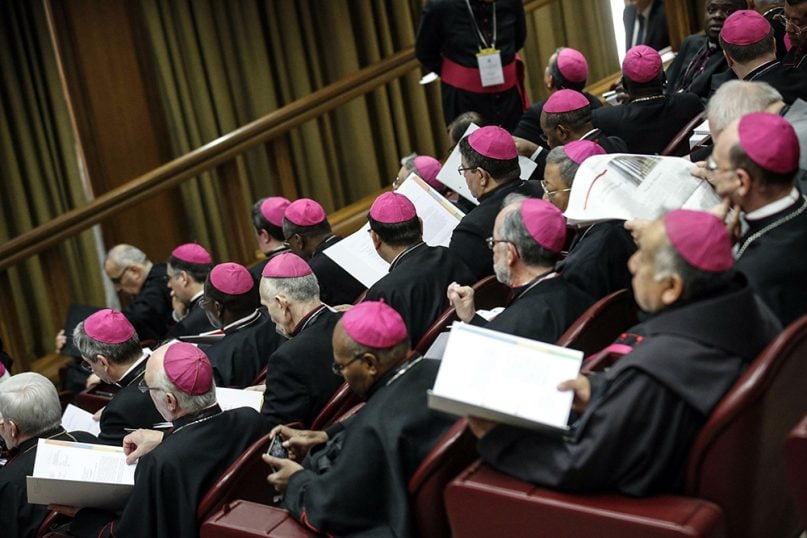 Bishops attend the second day of the Vatican’s conference on dealing with sex abuse by priests, at the Vatican, on Feb. 22, 2019. (Giuseppe Lami/Pool Photo via AP)

Many commentators have noted that while the Dallas Charter dealt with priest abusers, it did not deal with bishop abusers or with bishops who failed to protect children. The U.S. Conference of Catholic Bishops, which established the Dallas Charter, argued correctly that the USCCB did not have any authority over bishops. Only the pope does.

But the USCCB could have made recommendations to the pope on how to deal with bad bishops. It did not. It was not until the USCCB’s November 2018 meeting that it even discussed a proposal to deal with the problem.

In hindsight, it is tragic that the bishops did not follow the example of the American Red Cross. After it became known that the Red Cross’ regional chapters were distributing HIV-infected blood, the relief agency hired Elizabeth Dole as president in 1991 to clean up the mess. It did not completely solve the problem, but people knew the Red Cross was serious.

If 30 to 50 bishops had apologized, taken full responsibility and resigned in 2002, the church would not be where it is today. The Vatican in those days was adamantly opposed to bishops’ resigning under pressure. It feared the domino effect — if one bishop resigns, who will be pressured next?

This left only one avenue to pursue. Sue.

The first major lawsuit on clergy abuse was against the Diocese of Lafayette, La., where a victim of Father Gilbert Gauthe was awarded $1.25 million in 1986. This and future juries — Gauthe eventually cost the church some $10 million in settlements — felt that the victim deserved compensation but also that church leaders deserved to be punished. 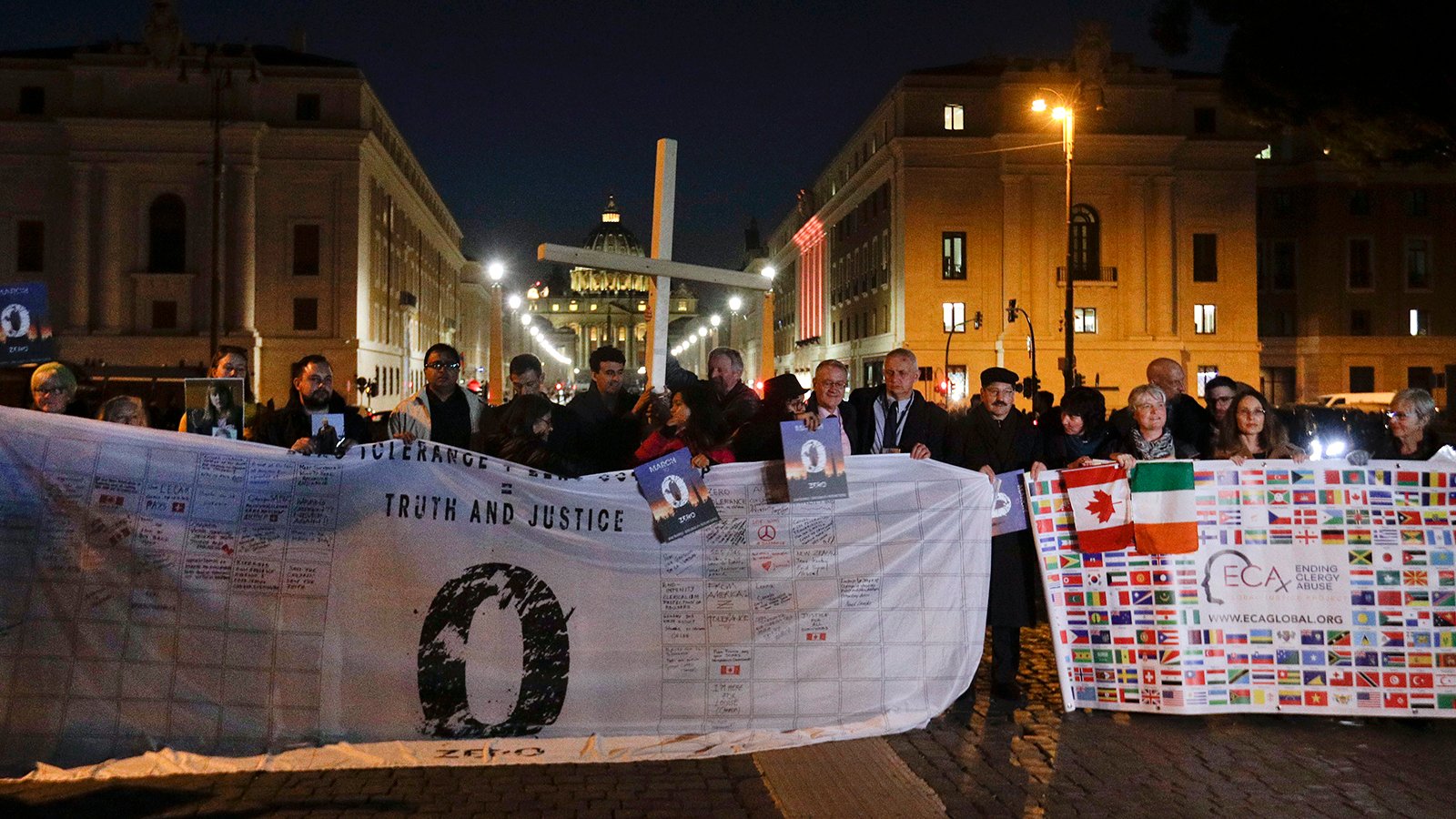 Survivors of sex abuse hold a cross as they gather in front of Via della Conciliazione, the road leading to St. Peter’s Square, visible in background, during a twilight vigil prayer of the victims of sex abuse, in Rome, on Feb. 21, 2019. Pope Francis opened a landmark sex abuse prevention summit by warning senior Catholic figures that the faithful are demanding concrete action against predator priests and not just words of condemnation. (AP Photo/Gregorio Borgia)

The problem, of course, is that this is not the bishops’ money. The truth is that no bishop has missed a meal or suffered because of these payments.

The money belongs to the diocese, a nonprofit charitable enterprise that has no owners. If a for-profit corporation injures people because it cut corners to make more money, then it makes perfect sense to punish it financially. The owners (stockholders) appointed management and must accept responsibility for its actions.

But a nonprofit has no owners to be punished. If it is financially penalized, those who suffer are the donors who contributed to it and the people it serves. They had nothing to do with the cover-up. They did not choose the leadership.

This does not mean that the victims should not be compensated. Some dioceses are now setting up victims compensation funds to help survivors. The reviewers, who are not clergy or church employees, listen to the survivors and grant them appropriate compensation.

These funds can help those who cannot sue because of the statute of limitation on civil suits. Some also see the funds as an attractive alternative to going to court because it is faster and can be done without a lawyer, who normally gets 40 percent of any payment.

Some dioceses, meanwhile, are taking symbolic actions against past bishops who did not protect children by, for example, removing their names from buildings and programs.

For the future, mandatory reporting laws are the best legal defense against bishops tempted to cover up abuse. A bad bishop can now be prosecuted and sent to jail.

Pope Francis has also made clear that not protecting children from abuse is grounds for being removed as a bishop. Most dramatically this was the case in Chile, where last year Francis demanded that every bishop submit his resignation. Even some U.S. bishops have been forced to resign, although the Vatican does not normally explain the reasons for the resignations. 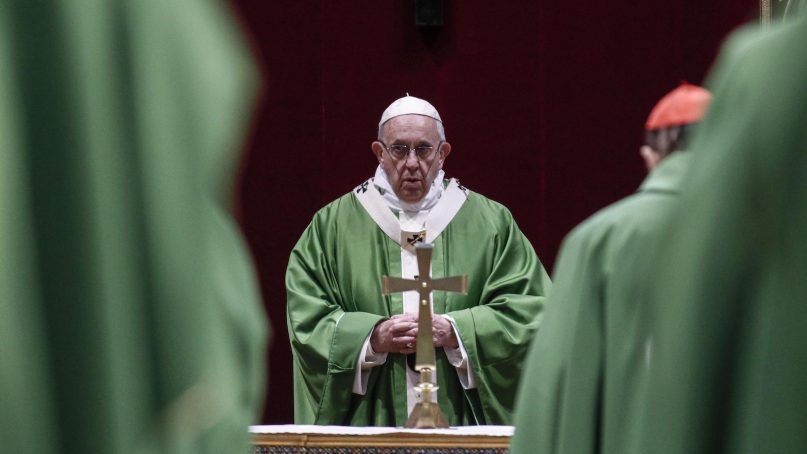 Pope Francis celebrates Mass at the Vatican on Feb. 24, 2019. Francis celebrated a final Mass to conclude his extraordinary summit of Catholic leaders summoned to Rome for a tutorial on preventing clergy sexual abuse and protecting children from predator priests. (Giuseppe Lami/Pool Photo via AP)

The problem is that these cases are being dealt with by the pope in an ad hoc way. There is no system for reporting allegations, investigating them or holding bishops accountable. Sometimes, the pope has appointed another bishop, such as the archbishop of Malta, to investigate the case and report back to him. But there are more than 5,000 bishops in the world. Too many to deal with in an ad hoc way.

Under the Vatican’s normal procedures, it would be the Congregation for Bishops that would deal with bad bishops, but it has not done a good job. The congregation has a conflict of interest because it would be required to investigate and find wanting the very men whom it was responsible for vetting and recommending for the episcopacy. Every bishop the congregation finds guilty is also an admission that it failed in its responsibility.

Currently, then, the church is in agreement that bishops should be held accountable, but with no consensus on how to do it.

At its November meeting last year, the USCCB discussed but did not vote on a proposal to establish a national review board that would have a staff to investigate allegations of abuse or cover-up by bishops. Cardinal Blase Cupich of Chicago suggested having the local archbishop investigate allegations against any bishop in his province. In 2015, the Pontifical Commission for the Protection of Minors recommended establishing a tribunal in the Vatican to investigate bishops accused of not protecting children.

Although today few bishops in the U.S. would risk the consequences of covering up abuse, many outside the U.S. are making the same mistakes that our bishops made in the last century. A principal purpose of the February meeting of bishops in Rome was to convince the attendees that they need to deal with abusive priests in their countries.

The proposals for holding bishops accountable described above are not necessarily mutually exclusive. One might be more appropriate in some countries than in others. Rather than spending decades trying to come up with the perfect solution for the entire world, the Vatican should allow countries to experiment with different procedures. Get something in place and improve it later.

The first step in dealing with clergy sexual abuse was removing bad priests from ministry and protecting children. Most bishops in the U.S. felt that was all that was needed and then the church could move on. But people are not ready to move on until they are assured that bad bishops are held accountable. And in addition, people want a full accounting of what happened. I will deal with that in my next column.

(This story has been updated to clarify that the bishops only publicly considered specific policy changes in November 2018.)