It was reported this week that J. Levine Books and Judaica, the historic Jewish bookstore in midtown Manhattan, is closing. It is reliably said to be the oldest Jewish bookstore in the United States, and it has been in the Levine family for four generations.

I take this as a personal loss.

There have been many constants that have marked my career as a rabbi.

But, near the top of the list was J. Levine.

For 43 years, I have bought my seforim (sacred Jewish books), non-fiction and fictional Jewish books, Judaica and assorted chachkes at Danny’s store. I have sent numerous wedding couples to him to buy ketubot.

Danny Levine was like a member of my family. We are roughly the same age; it is as if we grew up together.

I get it. J. Levine has fallen victim to the same market forces that have decimated so many brick and mortar bookstores — especially forces like Amazon.

But, can I simply say kaddish — for a store?

And more than a store, a way of being?

I love bookstores. They are one of my singular passions. 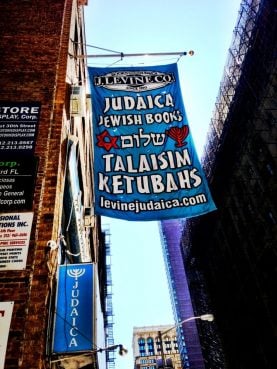 A large banner hangs outside of J. Levine Books and Judaica. Photo courtesy of Google

You combine books and coffee; I’m there.

The first places I visit in a city are the local bookstores (don’t even get me started on my literary map of Jerusalem). London? You have to pry me away from Charing Cross Road.

Primary among that love: independent bookstores. No offense, Barnes and Noble, but you are too big, too generic, too much the same. You are like Whole Foods. I know what you have. You have a good inventory.

But, there’s no there, there. Something is missing.

No — give me an independent bookstore any day.

I could make a long list of my favorites, but four come to mind.

Second: No trip to Washington, D.C., is complete without pilgrimages to Kramer Books in Dupont Circle.

Third: In case there is a book that I missed, I hop in an Uber and land at Politics and Prose on Connecticut Avenue (which white nationalists recently “invaded” by disrupting a book reading).

Third: The Bookstore in Lenox, Massachusetts. I love the Berkshires with a primal passion, and Matt Tannenbaum’s literary lair is the Holy of Holies. It is always the first place I visit when I am in town — yes, for the books, but mostly, for the spirited conversations between Matt and his customers and the customers with each other.

See, that’s part of it. Bookstores, like libraries, are the sanctuaries of ideas, literacy, debate — all things that are now endangered in our country. I want to encounter books with ideas that I find reprehensible, as well as books with ideas that I cherish. The miscreants who interrupted the reading at Politics and Prose knew what they were doing. They were not just barging in on a reading. They were barging in on critical thinking itself.

If independent bookstores disappear, so does the free exchange of ideas.

It is not only that bookstores connect you to ideas. Bookstores are where you connect with other people. I have created deep, powerful friendships with people whom I have met in bookstores. Some have become lifelong friends. 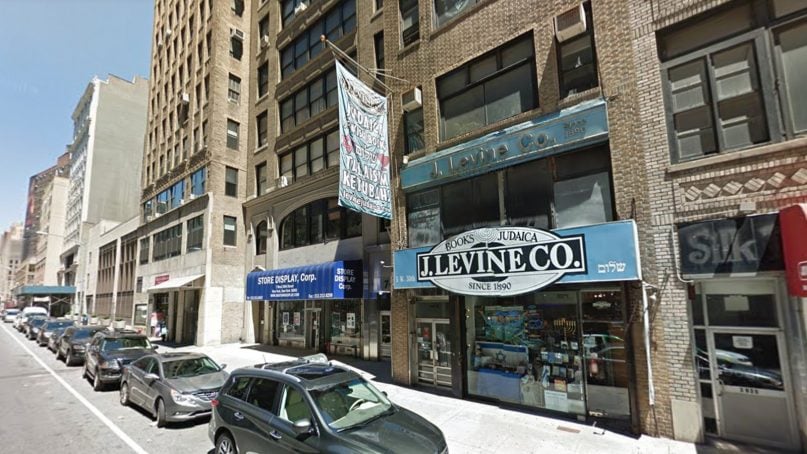 I liked shopping there because I would meet interesting people in the store. Often, they would be Jews with whom I would have little in common — with the large, major, holy exception of loving Jewish words and ideas.

Those people taught me something as well. They taught me a lot. Like, how to take Jews seriously. How to love the Jewish people.

How do you measure the worth of a bookstore?

All I can say is this:

I think of all the books that I have bought from J. Levine over the decades.

I think of all those books have taught me.

I think of all that I have been able to teach because of those books.

I think of all the people whom I have been able to inspire because of those books.

Because of those books.

Because of J. Levine.

Danny: You took your family’s legacy, and you did it very well.

News
Conspiracy theories and the ‘American Madness’ that gripped the Capitol
Articles of Faith
In 2020, a small but timely library of Sikh history
News
The COVID-19 books have arrived: From Pope Francis, John Piper, N.T. Wright and more
News
Lecrae on growing uncomfortable with white evangelicalism and finding ‘Restoration’
News
Eric Metaxas confirms he punched protester, says protester was to blame