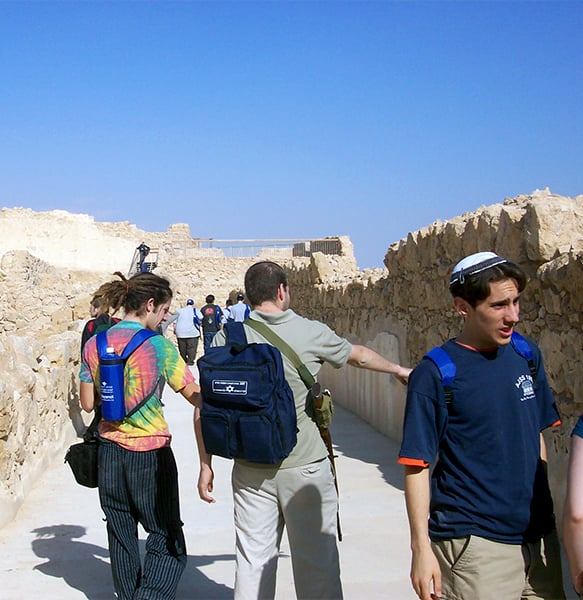 Birthright Israel visitors explore Masada, an ancient fortress in the Southern District of Israel, during their 10-day trip in 2003.
May 10, 2019
Jeffrey Salkin

There is good news for the Jews.

It starts in the African nations of Nigeria and Ghana, and the story of a young black woman named Mercedes Bent.

When she was a freshman at Harvard, she attended a meeting of the Association of Black Harvard Women.

When people introduced themselves, Mercedes noticed that several of them had names with African origins.

She introduced herself: “Hello, I am Mercedes Bent. Like the car.

Mercedes longed for a more intimate connection with her African heritage.

And so, Mercedes traveled to Israel with some of her friends. The trip forced her to break the tenth commandment.

More than that: the group visited castles that once held their ancestors—the castles from which captured slaves departed and never returned.

(Which is precisely one of the definitions of Zionism. To quote Hatikva, in what I believe to be the most important phrase of the song: It is lihiyot am chofshi b’artzeinu. It is to be a free people in our land – free not only from oppression, but also free to live, creatively and openly and vitally, as Jews. To create the Judaism not of the past, but of the future.)

That connection to a past is what minority communities need and for which they hunger – especially for their children. That education and that connection boosts their self-esteem and even their academic performance. This has been true for black children, and for Asian-American children, and for Latino adolescents, and for Native Americans – where they discovered that when people participated in their indigenous traditions, it can prevent suicide and addiction.

To embrace one’s true self is actually a mekor chayim – a source of life.

I would love to see a philanthropist or foundation fund educational trips to Ghana, Nigeria and other African countries for black young adults from other parts of the diaspora, making this experience accessible to more people who could benefit from it as much as I did – from the power of exploring my ethnic-racial identity in the place where my ancestors lived, and the most important lesson I learned on my journey: It really is possible to heal through heritage.

Mercedes used the term Diaspora. Every ethnic group has a diaspora. But, in its classic sense, the term diaspora – that sense of dispersion, perhaps also that sense of exile from one’s land – that term is natively Jewish, though no longer specifically Jewish.

Mercedes also used a wonderful phrase: to heal through heritage. It reminds me of one of the phrases that defines the international Reform youth movement: tikkun ha-am, repairing the people, and tikkun atzmi, repairing the self – and how the two are aspects of each other.

Let's get with the good news.

That story about the west African Birthright trip teaches us that Jews have influenced the world – in ways that we could not have even imagined.

Just as Jews longed for their land, and just as we sensed that our return to the land would mean a return to our tradition – young African Americans sensed the same thing.

It is not the first time that this has happened.

More than a century ago, Marcus Garvey created the back to Africa movement. In the 1960s, it became popular for young blacks to adopt the clothing and the languages and even the names of their ancestors – in much the same way as Howard decided that he wanted to be Chayim, or that Debi decided to become Devorah.

Our Zionism, our longing to be ourselves, has influenced other people – who have longed to be themselves, as well.

Consider the words of President Barak Obama – Barak, not Barry.

At that precise moment, President Obama understood the opportunity that exists (and here I quote): “when people return to their Land and excavate their best traditions and their best selves.”

So writes the Canadian poet A.M. Klein, who was a great influence on the writing of the late, lamented Leonard Cohen:

The fathers that begot me

dwell in my veins, they eavesdrop at my ear,|

They circle, as the Torahs, around my skull,

In exit and in entrance all day pull

The latches of my heart, descend and rise—

And there look generations through my eyes.

Whoever we are, whatever our roots: generations look through our eyes.