Are you really there?

And do you hear and

As I sat in Primary Singing time during 2018, I found myself needing to change the words of several songs about God because my own experiences with God recently have included God the Mother/Heavenly Mother/Goddess. I also sang:

I am a child of God

And They have sent me here

Teach me all that I must do,

To live with Them someday.

When I sang that one, one of my dear little Sunbeams piped up, “that’s not the right way to sing it.” I said mildly, “that’s the way I sing it.”

What other songs could we change?

How about if we sang “I Lived in Heaven” with this line: “Then Heavenly Parents presented a beautiful plan”” Or if instead of “I Know My Father Lives” we sang “I Know My Mother Lives”?

Would any of these tiny changes rock our doctrinal ship? It seems to me that all they would do is acknowledge what any Mormon would admit to: that we believe in Heavenly Parents, a divine Mother and Father, though our (male) leadership spends very little time talking about the female side of this partnership.

It might be because my own relationship with my mortal father is complicated, but felt for many years manipulative and abusive. I suspect I’m not the only adult woman out there who struggles to separate a mortal experience of fatherhood from a divine father. When I was in high school, reading the Old Testament accounts of a vengeful, wrathful god who commanded the Israelites to kill anyone in Canaan—man, woman, or child—made sense to me because I’d learned growing up that obedience had to be immediate or there would be consequences. God’s love was conditional, depending on how well I did at following long lists of rules and commandments.

When I try to explain to Mormon men why it’s important for me as a Mormon woman to see women praying in General Conference, and to hear women speak with authority equal to that of the apostles, they often respond with “What does it matter if the message is from God?”

Let me try again to explain why it matters. It matters because my own self-image has been damaged by the idea that only the masculine is divine. By never speaking directly of femininity as divine, never singing of a Heavenly Mother, never seeing depictions of Heavenly Mother, I have felt like my work as a mother is less valued than the work of the men who regularly see those like them standing at the pulpit.

It’s only been over the last few years that I’ve been reworking my notion of what divinity is, and how femininity in general might be perceived in an eternal sense. What might womanhood look like in heaven? Some of this journey has been done in my own mind, as I’ve consciously imagined a mother figure sitting with me in my prayer space. I’ve felt less judgment and more love in this new relationship with God.

Much of my adulthood was an extension of my sense of disgust for feminine things. I didn’t wear makeup, hated wearing dresses, considered cooking and cleaning and sewing “menial tasks,” and instead looked for more masculine accolades in school and at work. It’s been a long process of examining my own internalized misogyny to reconsider what things I enjoy doing without considering if they’re masculine or feminine.

All of this has also changed the way I see the possibility of the divine within myself. Because throughout my life, the image of God in church art and in the language of scripture has been male, it’s been hard to see my feminine aspects as something valuable rather than something I should try to suppress in favor of masculine traits. Experiences with Heavenly Mother in prayer and in poetry are an important part of me accepting and gradually coming to love myself. And to love Her, and the aspects of Her in women all around me, including my own daughters.

The following are books of poetry (and a few excerpts) about Heavenly Mother that have recently appeared and that have helped me to feel more at ease talking about the divine feminine and seeing aspects of myself as divine. I recommend them to anyone who on this coming Mother’s Day questions if she is enough, if she is loved by God, and if her mothering is acceptable before God.

I Gave Her A Name by Rachel Hunt Steenblik, illustrated by Ashley Mae Hoiland

“She is the place

and sleeping. She is waking slowly”

“I searched for my Mother, the way a baby roots

for her mother’s breast.”

The Tree at the Center by Kathryn Knight Sonntag

“Is our journey here, after all,

to return us to the navel we left,

plant our souls in the center and

There is also a website collecting poetry about Heavenly Mother here.

Permission to quote from I Gave Her a Name, Mother’s Milk, and The Tree at the Center has been graciously provided by BCC Press. 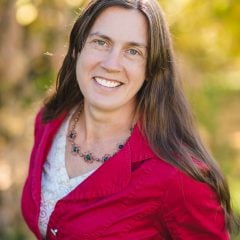