(RNS) — When a self-proclaimed white supremacist killed 51 people at a Christchurch, New Zealand, mosque and streamed it on Facebook Live, he punctuated his video manifesto with a curious phrase: “Subscribe to PewDiePie,” a reference to a Swedish videogamer and YouTube personality. A few months later, another racially motivated shooter at a Poway, Calif., synagogue did the same thing.

PewDiePie has no obvious political affiliations. The phrase “subscribe to PewDiePie” was, in the parlance of Internet message boards like Reddit, 4Chan or its alt-right counterpart 8Chan, a meme and a troll: a nonsense message designed to perplex “normies” and credulous journalists. It was, in a word, absurd.

This sense of absurdity — the intersection of gleeful trolling, often disembodied behind a digital screen, and catastrophic real-world violence — defines much of the way today’s internet-radicalized right presents itself to the world.

It’s often tempting to categorize today’s right-wing terrorists, from the Christchurch and Poway shooters to the “incel” (involuntarily celibate) perpetrator of the 2018 Toronto van attack to the equally misogynistic killer of six in the 2014 attack on the UC Santa Barbara, as exclusively motivated by racial, religious or gender-based hatred. 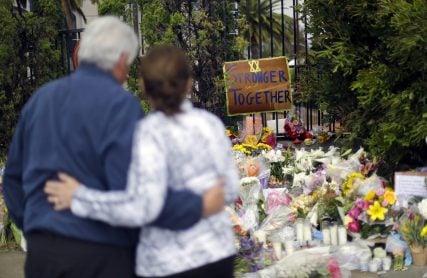 A couple embraces near a growing memorial across the street from the Chabad of Poway Synagogue in Poway, Calif., on April 29, 2019. (AP Photo/Greg Bull)

To focus only on their rage, however, is to miss the spiritual payoff these cultish hate groups offer to new members.

Yes, today’s alt-right is fueled by a combination of backward-looking atavism and pure, unfocused nihilism. But those who have been radicalized on video-game platforms and 4Chan forums have also been lured by a sense of community and purpose in a world that seems increasingly meaningless.

Using tropes common in fascist ideology through history, alt-right groups offer to return the world to a vanished age of mythic warriors, gods and heroes. In doing so, they defeat meaninglessness by rejecting the very possibility of meaning itself. Everything is a joke — even murder.

The nihilism of today’s alt-right, in other words, is both a religion and a rejection of the transcendence that religion holds out as a balm.

A good illustration of the dynamic cropped up around the 2016 election. A “joke religion” of Kek-ism grew up around the idea of worshipping (or purporting to worship) alt-right cartoon frog symbol Pepe, himself an embodiment of an Egyptian chaos god called Kek. On sites like 4Chan and Reddit, devotees of Kek said they believed the frog god was responsible for “meme magic” — a nebulous force that would propel Donald Trump into the White House.

The name “Kek” comes from the video game “World of Warcraft,” where it doubled as an encoded version of the phrase “LOL.” Kek thereby became the god of lulz — the sly, universal internet indicator of a humorous put-on.

Where Kek went, trolling followed. “Trump’s new president-elect status alone has seeded a fair share of entropy, hasn’t it?,” one pro-Kek blog said shortly after the election. “Protests abound, monuments being vandalized, and entire political systems being called into question. It would seem as though Kek’s work has only just begun.” Pepe the Frog was adopted as an alt-right symbol. Image courtesy of KnowYourMeme.com

After Trump’s election, “Kek” (and his imagined country, “Kekistan”), went viral as alt-right shibboleths. The new “national flag” of “Kekistan” made its appearance not only on Twitter avatars and 4Chan boards, but also in real life: bearers of the Kekistani flag made an appearance at the 2017 Unite the Right Rally in Charlottesville, as well as a pro-Steve Bannon rally outside the White House that same year.

Another added: ““We have lived under normie oppression for too long!” A “common prayer” to Kek — “For thine is the memetic kingdom, and the shitposting, and the winning, for ever and ever. Praise KEK” — went viral.

Did people literally believe in Kek? Probably not. But Kekism, as a unifying narrative, and as a community, can tell us much about the alt-right more broadly.

For adherents, the god of lulz represented both sides of their foundational ideology: a religious hunger for an imagined “meaningful” past and an obsession with irony predicated on the idea that the world is fundamentally meaningless, anyway. What did it matter who lives or who dies, who is murdered and who remains if the world is one giant troll?

What is the difference between being a genuine hero and being “an hero,” the latter a term for a suicide popularized on 4Chan, taken from a well-intentioned friend’s misspelling on the Myspace memorial page of a child who had, indeed, killed himself.

To understand the racial and religious hatreds of the alt-right is only half the battle. We must also understand the profound, and insidious, spiritual alienation at its heart. It’s a religion of nonsense, of trolling, of lulz in which innocent deaths — the very real human cost — don’t even register as mattering.

After the 2018 Toronto van attack, self-proclaimed “incels” and other denizens of the alt-right internet celebrated. The killer had openly cast his attack as the beginning of a war against women: particularly the attractive “Staceys” who dared to reject men like him.

“I prefer acid attacks to mass killings, though,” one poster mused, “wonder who is going to do a ‘mass acid attack.’ He will have zero kills to his high score but in my book he’d have beaten all the high scores by virtue of lives.”