VATICAN CITY (AP) — Pope Francis gave a joyride in his popemobile Wednesday to eight migrant children who recently arrived in Italy from Libya, in his latest gesture to show solidarity with asylum-seekers and those on society’s margins.

Francis picked up the kids, who hail from Syria, Nigeria and Congo, at the start of his weekly general audience and zoomed around St. Peter’s Square with them in the backseat. Some waved, others gave a thumbs up before bidding Francis goodbye with hugs and a selfie.

The Vatican said some of the children had arrived in Italy on a migrant boat a few months ago, while others arrived April 29 with their families via a humanitarian corridor. They were being cared for by a humanitarian group in Rome. 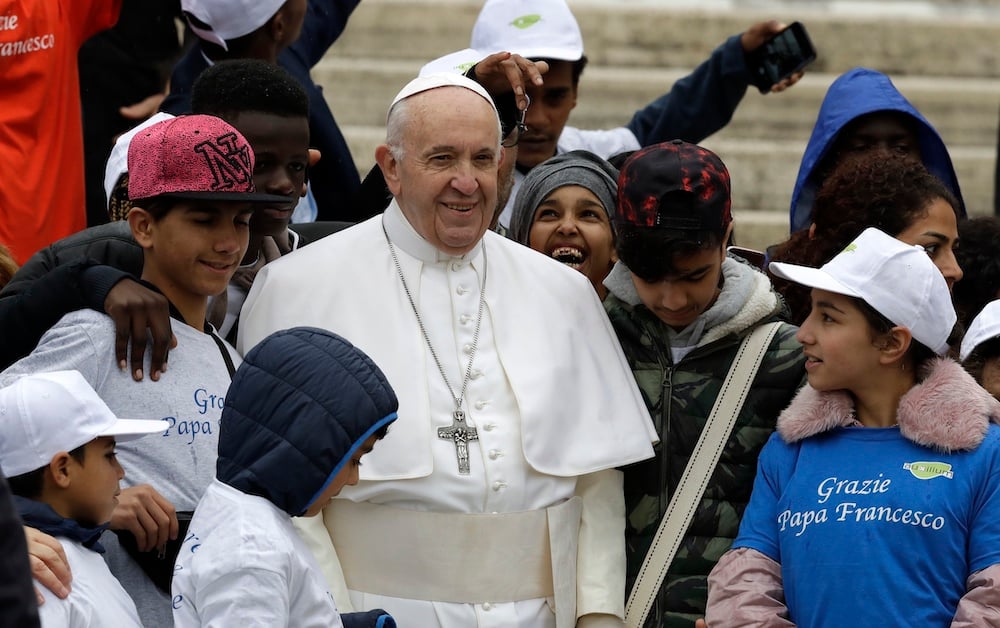 Pope Francis meets a group of migrants recently arrived from Libya, wearing shirts with writing reading “Thank you Pope Francis, at the end of his weekly general audience in St. Peter’s Square, at the Vatican, Wednesday May 15, 2019. (AP Photo/Andrew Medichini)

Francis has clashed with Italy’s hard-line government about the need to welcome and integrate migrants, and his gesture followed mounting tensions with right-wing politicians ahead of European Parliament elections May 26.

The latest blowup occurred when Francis’ top charity aide climbed into a manhole over the weekend to restore electricity to a building full of squatters after the power company pulled the plug over unpaid bills.

Francis returned home from a 2016 trip to a Lesbos, Greece refugee camp with a dozen Syrians on his plane.