You wake up the next morning, and you don’t have that job anymore.

Neither do you have your health insurance. For some people. it means leaving their living quarters in a few months.

If you are a young person: you go to sleep one night, and you have a school to attend in the fall.

You wake up the next morning, and you discover that you need to look for a new school.

That is precisely what happened recently in Greensboro, North Carolina.

That is the site of the only Jewish boarding school in the United States — the American Hebrew Academy.

AHA, as it was affectionately called, was the dream child of the late Mauricio (Chico) Sabbah.

In particular, by locating the school not in Los Angeles, and not in New York, but in a sweet Southern community, Chico hoped that AHA would draw young people from small Southern communities.

Ten days ago, the school announced that it was closing. Immediately.

For years, I have admired AHA from afar.

I have colleagues and friends who have been intimately involved in the school — as faculty members and as communal leaders.

I have friends whose children attended the school.

The closing also affects the URJ’s Six Points camps, which operates on the facility.

This summer is fine, but as for subsequent summers — this remains to be seen.

This is particularly poignant, because of all the full-time immersive experiences that are available to young Jews and their families, Jewish summer camps are still the most accessible and the most successful.

People are devastated. What happened?

I refer you to the above linked article that my friend and colleague, Phil Cohen, wrote about the situation.

Let me reflect on the broader meaning of what has happened.

First: the demise of AHA reflects the best that the Jewish community embodies.

The organized Jewish community of Greensboro, has sprung into action to aid both the academy’s staff and students. For students who need the help, efforts have been made to assure the smoothest transition possible to another high school. Funds are being raised to provide financial assistance. Rabbi Fred Guttman, senior rabbi of Temple Emanuel, called a community meeting Thursday evening for academy folks to process the event. Guilford County Schools has organized a job fair to help faculty. Prizmah, the national Jewish education agency, has offered to help circulate resumes. Alumni are all over Facebook expressing anger and offering support, and are helping to raise money.

Treating the academy’s closing like a natural disaster, Jewish Family Services—which, full disclosure, is directed by my [i.e., Phil Cohen’s] wife, Betsy Gamburg—has sprung into action, providing information and material help and proving that the community is ready to spring into action when the occasion calls.

The aftermath of the closing of AHA shows the Jewish community at our best — giving tzedakah and communal support.

But, second: the demise of AHA also reflects the problematic nature of American Jewish life.

I will let others analyze the fiscal issues that beset AHA. Some of them were simply unavoidable.

The larger issue is that too often, our dreams interfere with our reality.

But, also, from smaller Jewish communities where, one might have thought, the desire for more intense Jewish involvement would have been the strongest.

Glenn Drew, the school’s CEO, knew that the school could not rely on simply Americans to fill the beds.

So, he became a modern day Marco Polo (or the Jewish equivalent, Benjamin of Tudela), scouring the world for potential students.

But, these only constituted minor successes.

The truth is: the activists who were involved in AHA overestimated the desire for full time Jewish education.

Think of it. Jewish supplemental schools, which require four hours a week, are facing serious challenges.

It would be logical to assume that an intensive, 24 x 7  Jewish experience would also encounter serious challenges.

Sending kids away to private boarding schools is simply not part of American Jewish culture — with the exception of the Orthodox community.

As the truism puts it: culture eats strategy for lunch.

No strategy was strong enough to buck the tides of contemporary American Jewish culture.

In the same way that American Judaism has been helpless in bucking the tsunami of cultural changes in American life that have challenged all religious institutions, and all voluntary associations.

Here is the larger challenge.

But, the larger challenge still remains: how do we create a culture of intensity among non-Orthodox Jews?

How do we kindle a fire that will actually prompt both parents and kids to want to invest themselves in something that as worthy and special as AHA?

When we figure that out (forgive me): that will be the AHA moment. 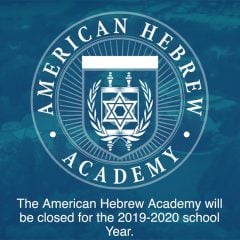