HOT SPRINGS, N.C. (RNS) — For years, liberals — even liberal people of faith — have been wary of fusions of faith and politics, careful not to pierce the boundary between church and state.

But at this year’s Wild Goose Festival, an annual Christian gathering that convened July 11-14 in a campground along the French Broad River, many attendees asked the same question: What if my beliefs are by implication political?

This year was Wild Goose’s eighth iteration since 2011, when the first gathering was organized as an American version of the Greenbelt festival in the United Kingdom. It is a curious blend of music festival, activist strategy session and spiritual revival, all swirling below the Mason-Dixon Line in a mountain retreat where mud is plentiful and cellphone signal is not. The atmosphere may seem foreign to top Democratic Party operatives and even many liberal religious leaders. But as the religious left exerts an unaccustomed influence on political rhetoric, Wild Goose has begun to draw recognizable names, including presidential candidate Marianne Williamson.

It’s hard to miss the festival’s political bent. The dirt road from the entrance to the conference’s main stage was a gauntlet of booths belonging to liberal activist groups such as Sojourners, the Washington, D.C., liberal evangelical organization; Creation Care Alliance, a network dedicated to religious environmentalism; and NETWORK, a left-leaning Catholic social justice lobby whose leader, Sister Simone Campbell, spoke at the 2012 Democratic National Convention.

Alongside them were other booths advocating for left-leaning, mainline Christian denominations such as the United Church of Christ or the Episcopal Church. Both are listed as partners of the gathering that ranges from the Evangelical Lutheran Church in America to the Human Rights Campaign.

The mostly white crowd was clad in shirts adorned with “Black Lives Matter,” “Make America Native Again” and other leftist slogans. One man walked up and down the road wearing a sandwich board that read “Free White Ally Coaching.”

All the while, hymns and other religious music echoed from multiple stages.

On Saturday (July 13), the festival’s second day, the Rev. William Barber, co-chair of the Poor People’s Campaign and another past speaker at the Democratic National Convention, delivered a lengthy speech to an enraptured crowd. Although he rejects the term religious left as “too puny,” Barber — who only weeks before attracted 10 Democratic presidential candidates to protests and forums he organized in Washington — didn’t shy away from the political. “We must have a moral Pentecost, and we must unite right here, right now,” Barber said. “(The Bible) says, the primary thing people of faith ought to be concerned about is how we treat the poor, the women, the children, the stranger and the least of these.

“But that’s not all that’s real,” he said from a stage that featured a “Black Lives Matter” sign, a rainbow flag and a makeshift cage as an apparent reminder of immigrant children being held in detention centers. “What’s also real is the possibility. Particularly if we have a moral Pentecost. How do I know? Well, I’ve seen the spirit.”

Barber then explained that he has seen “the spirit” in the various places where he’s organized as part of the Poor People’s Campaign, such as with rural teachers in West Virginia and with healthcare advocates in North Carolina.

Asked after his talk whether he sees in political activism the possibility of a spiritual community, Barber rejected a distinction between the two, calling it a “false dichotomy.”

Barber was mobbed by supporters as he exited the stage. Some took selfies, others thanked him for his work, and several noted they were praying for him. One man, who identified himself only as Brother Castello, asked Barber to pray and lay hands on him as he pursues ordination in the Old Catholic Church of the Americas, a small denomination distinct from Roman Catholicism.

It was one of many spiritual exchanges at Wild Goose, where denominational boundaries appeared less important than shared religious values.

“There’s an energy here,” Castello, a North Carolina resident who grew up Pentecostal, said of Wild Goose. “You’re having fun but time slows down.”

Castello’s sentiment was echoed by Williamson, whose bestselling books espouse what she calls a “universal” spirituality.

“This is a place of many like-minded people,” the candidate, who was introduced by religious historian Diana Butler Bass, told RNS. “The intersection of religion and spirituality and social justice is my tribe. It’s the space I inhabit.” 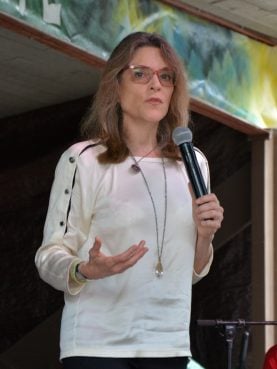 She also was adamant about the potential power of a progressive faith activism.

“The religious left went underground, and I feel it’s time for a blooming,” she said.

Donna Mistr, a former member of a United Methodist congregation who said she had embarked on a “personal transformation” of her faith as a “50-something-year-old woman,” finally found a “welcoming, progressive” Presbyterian church. It was there that she first heard about Wild Goose.

“What drew me to Wild Goose, after being drawn out of the traditional church, was thinking, ‘there has to be something else,’” she said.

Mistr said participants at Wild Goose share an emphasis on “acting on our beliefs.”

Breakout sessions have titles such as “The spiritual Grounded Activist: Myth or Real-Life Movement Unicorn” and “Faith in the Age of Tyranny,” organized by liberal advocacy group Faith in Public Life.

“I would say it’s more explicit this year,” said Erin Goddard, who has attended at least four times. “I think the content has always been there, but it feels like there’s more willingness to say, ‘Now you go do this thing.’”

But politics hardly eclipses the spiritual. Other sessions included “the LGBTQ-Friendly Bible Hour,” “Parenting While in a Major Faith Shift” and “Songwriting for Christian Songwriters Who Hate Christian Music.”

Worship was often unorthodox but deeply communal. The Rev. Laura Barclay, a Baptist minister, and Sarah Hof, an agnostic, both of whom are co-stars of the feminist “Bible Bitches” podcast, spoke excitedly of a communion service in which the traditional elements of bread and wine were replaced with doughnuts and bourbon. 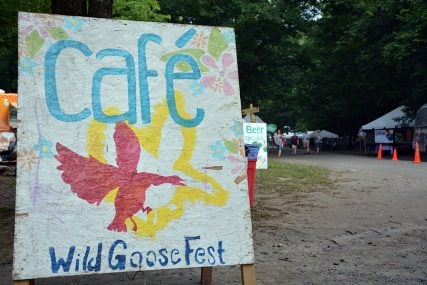 Some of the amenities at the Wild Goose Festival in Hot Springs, N.C., on July 13, 2019. RNS photo by Jack Jenkins

They also noted that the political edge felt especially prevalent at this year’s gathering.

“I think what’s happening is that more people are realizing the urgency to integrate faith with civil disobedience or political action,” Barclay said, “and realizing that there’s a difference between marrying partisan politics with religion and the necessary part of being political.”

But like many liberal gatherings, a political streak means attendees often coupled praise with critique. Goddard, for her part, was one of many who argued Wild Goose could do more to address its lack of diversity.

“There’s always going to be more space for leadership by marginalized communities, and that’s never where it should be,” she said. “I think it’s always getting better, but … (looking at) the demographics of the people who come, it’s probably something that can be done more intentionally.”

Even so, the spirit of liberal religious activism was alive and well at Wild Goose. During his talk, Barber recounted a conversation with a teacher he met while protesting in North Carolina.

“I asked one of the teachers, ‘Why are you here?’ She said, ‘Because the Holy Ghost said I had to be here,’” he said.

The crowd erupted in response, with several shouting “Amen!”

(This story has been updated to correct the spelling of Brother Castello’s name and his denomination.)