(RNS) — With the bang of a gavel and a moment to honor the Native Americans who first called Milwaukee home, Presiding Bishop Elizabeth Eaton opened the ELCA Churchwide Assembly.

The primary decision-making body of the mainline Evangelical Lutheran Church in America meets through Saturday (Aug. 10) at the Wisconsin Center in Milwaukee.

With more than 3.5 million baptized members, the ELCA is one of the largest Protestant Christian denominations in the United States. Its churchwide assembly includes 927 voting members and more than 9,100 congregations across the U.S. and the Caribbean.

RELATED: ‘She is loose’: A historic group of female Lutheran bishops on #MeToo and the Holy Spirit

The Rev. M. Wyvetta Bullock, executive for administration in the Office of the Presiding Bishop, described the meeting as a “big family reunion.”

The assembly may lack some of the drama of the United Methodist Church General Conference, which voted in February to strengthen a ban on same-sex weddings and LGBTQ clergy, or the Southern Baptist Convention, which exploded in debate earlier this summer over whether women should preach. But the assembly offers a window into the issues important to many progressive Christians across the country.

Here are five things to watch at this week’s ELCA Churchwide Assembly.

Even before the weekend’s mass shootings in El Paso, Texas, and Dayton, Ohio, the assembly planned to take time on its final day to remember and grieve the “all-too frequent” gun violence across the U.S. and discuss how people of faith are called to respond.

Three regional synods have made proposals asking the assembly to call for a ban on the sale of assault weapons and large-capacity magazines in the U.S.

And the denomination published a devotional earlier this summer titled “A 60-Day Journey Toward Justice in a Culture of Gun Violence.” Its daily readings include prayers, Scripture, church teachings, information and ideas for advocacy.

“We are not a church that stands by silently in the face of hatred, violence or tragedy in the world,” Eaton said, following the shooting earlier this year at Chabad of Poway in California.

Those efforts follow a social policy resolution adopted by the 1993 assembly asking church groups to advocate for gun control. 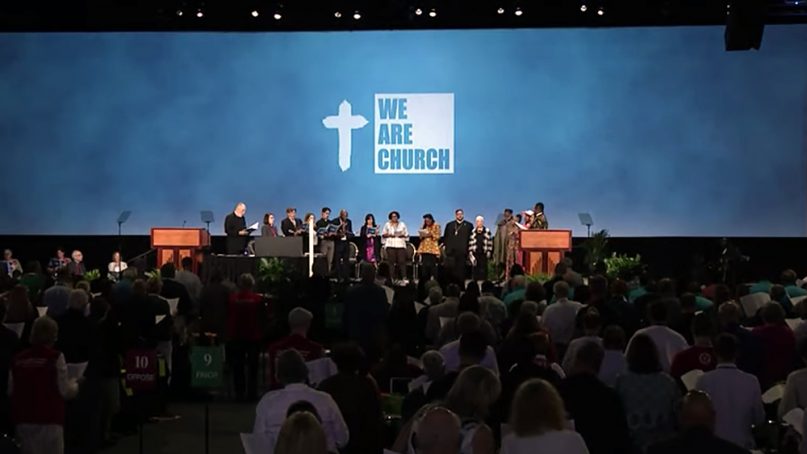 The ELCA Churchwide Assembly on Aug. 6, 2019, in Milwaukee. Video screenshot

The assembly has planned a Wednesday afternoon march to and prayer vigil at the Immigration and Customs Enforcement building about a mile from the Wisconsin Center.

That comes as the Southeastern Pennsylvania Synod has proposed that the ELCA “recommit to being an advocate and justice seeker for immigrants.”

The issue struck close to home in May when Betty Rendón, a student pastor at a church in the ELCA’s Greater Milwaukee Synod, was deported to Colombia.

“When children are put in cages; when death-row inmates get soap and toothpaste, but these people who are detained do not; when the government is making it more and more difficult to honor the Geneva Conventions, which allow people to seek asylum; and then just two months ago, one of our own was deported … we felt we can’t be silent,” Eaton told Religion News Service.

When the ELCA began work on its proposed social statement “Faith, Sexism, and Justice: A Lutheran Call to Action,” Bishop Viviane Thomas-Breitfeld of the South-Central Synod of Wisconsin said, “Women’s justice issues were not dominant news.”

Seven years later, with the #MeToo and #TimesUp movements drawing attention to sexism and violence toward women, the assembly will vote on a proposed social statement that names patriarchy and sexism as sins and acknowledges the church’s complicity in those systems.

“The church’s mandate for justice for women is rooted in our biblical understanding of God’s desire for abundant life for all,” said Thomas-Breitfeld, who co-chaired the task force on women and justice.

And the statement isn’t meant to sit on a shelf, she said.

It calls the denomination to act to end gender-based violence, encourage women and girls to pursue ministry and leadership roles in their congregations, use “gender-inclusive and expansive” language for God and address inequities in pay and hiring. 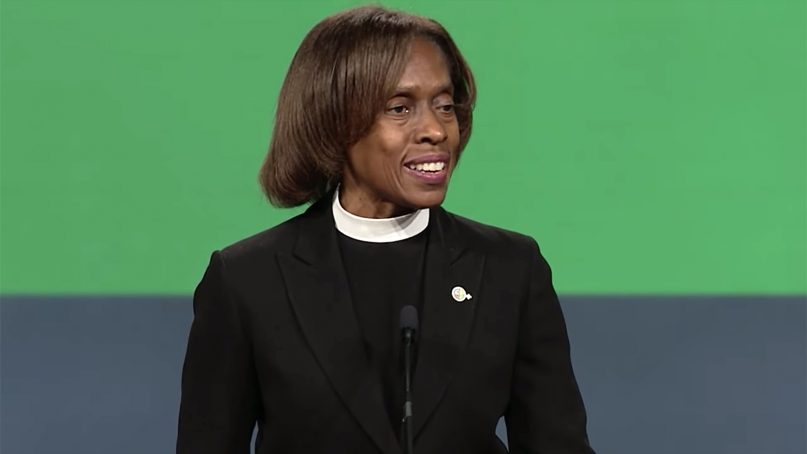 4. Authentic diversity and an apology

On Tuesday, the presiding bishop and other denominational leaders delivered a “Declaration of the ELCA to People of African Descent.”

That declaration included a confession of the church’s complicity in slavery. It named racism as a sin, acknowledged the institutional racism that continues within the denomination and vowed to repent and work for racial justice.

It also included a prayer for God to save the denomination from “apologies when they don’t give way to action.”

“We, the people of African descent or the Evangelical Lutheran Church in America, can receive this apology as a divine mark of repentance that serves as a catalyst for change,” said the Rev. Lamont Wells, president of the African Descent Lutheran Association.

Later in the week, the assembly will vote on a strategy to equip the overwhelmingly white denomination (96%, according to the Pew Research Center) to become more “authentically diverse.”

The assembly kicks off a year of celebrations, Eaton noted in her opening remarks.

“This is not just a celebration for women, or women of color or for the LGBTQIA+ community,” said Eaton, who was reelected as presiding bishop Tuesday morning.

“These are decisions of this whole church, and this is a celebration for the whole church. This church has been blessed by the ministry of those formerly excluded.”

It’s also a “big ecumenical year” for the ELCA, she said, noting it marks 10 years of full communion with the United Methodist Church and 20 years with the Moravian Church, Episcopal Church, Reformed Church in America, Presbyterian Church (USA) and United Church of Christ.

It also has been 20 years since Lutherans issued the Joint Declaration on the Doctrine of Justification with the Roman Catholic Church, a “huge, huge breakthrough” for Lutherans and Catholics, who split during the Protestant Reformation in the 1500s, she said.

And it has been 25 years since the denomination’s declaration repudiating Reformer Martin Luther’s anti-Semitic writings and apologizing to Jewish people.

The assembly has planned a litany of repentance based on that declaration and will vote on a policy statement titled “A Declaration of Inter-Religious Commitment.” The proposed statement outlines how Lutherans can cooperate with people of other religious traditions and still remain faithful to their own understanding of God, according to the presiding bishop.

That’s important, Eaton said, because “we all live in an interreligious world now.”