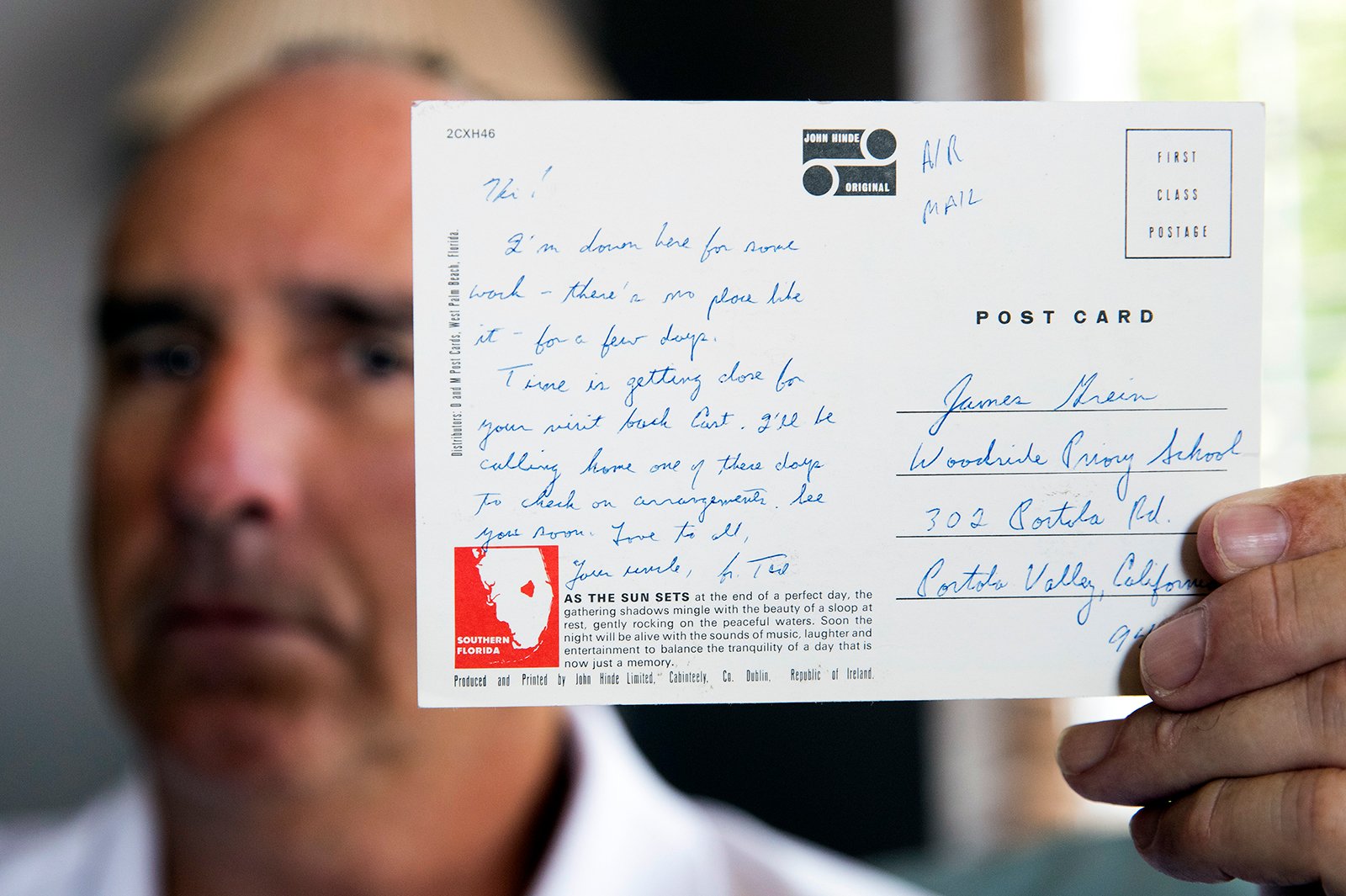 James Grein, 61, at his house in Sterling, Va., on July 26, 2019, holds a Florida postcard sent to him when he was 15 years old by now-defrocked Cardinal Theodore McCarrick. Letters and postcards McCarrick wrote to three men he allegedly sexually abused and harassed show how he groomed his victims, experts say. (AP Photo/Manuel Balce Ceneta)
August 6, 2019
Nicole Winfield

VATICAN CITY (AP) — At first glance, the handwritten postcards and letters look innocuous, even warm, sometimes signed off by "Uncle T." or "Your uncle, Father Ted."

But taken in context, the correspondence penned by disgraced ex-Cardinal Theodore McCarrick to the young men he is accused of sexually abusing or harassing is a window into the way a predator grooms his prey, according to two abuse prevention experts who reviewed it for The Associated Press.

Full of flattery, familiarity and boasts about his own power, the letters provide visceral evidence of how a globe-trotting bishop made young, vulnerable men feel special — and then allegedly took advantage of them. 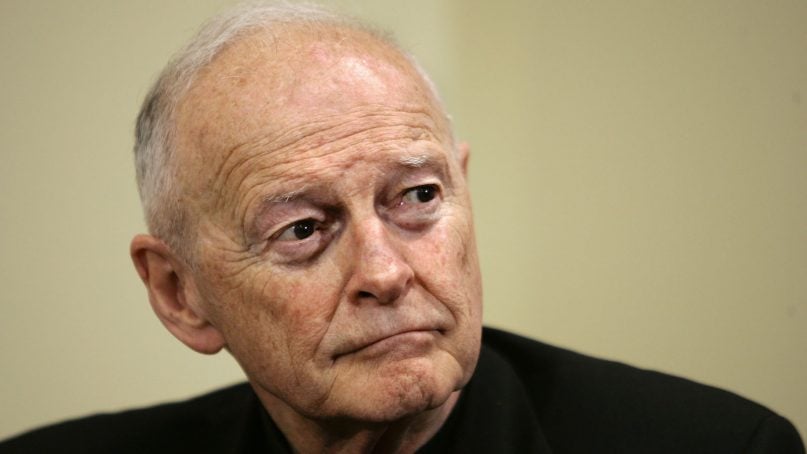 The AP is publishing correspondence McCarrick wrote to three men ahead of the promised release of the Vatican's own report into who knew what and when about his efforts to bed would-be priests. Access to an archbishop for young men seeking to become priests "is a key piece of the grooming process here," said one of the experts, Monica Applewhite.

Pope Francis defrocked McCarrick, 89, in February after a church investigation determined he sexually abused minors as well as adult seminarians. The case has created a credibility crisis for the Catholic hierarchy , since McCarrick's misconduct was reported to some U.S. and Vatican higher-ups, but he nevertheless remained an influential cardinal until his downfall last year. James Grein, 61, speaks at his house in Sterling, Va., on July 26, 2019. Grein says the now-defrocked Cardinal Theodore McCarrick’s exalted place in the family over three generations created pressure on him to visit with McCarrick during weekends away from boarding school and visits when he would be molested. “If I didn't go to see Theodore I was always going to be asked by my brothers and sisters or my dad, ‘Why didn't you go see him?’" (AP Photo/Manuel Balce Ceneta)

The testimony of James Grein, 61, the first child McCarrick baptized, was key to the Vatican case. The son of close family friends, Grein told church investigators that McCarrick began sexually abusing him when he was 11, including during confession and at family weddings and holiday celebrations.

In an interview with AP, Grein said McCarrick's exalted place in the family over three generations created pressure on him to visit with McCarrick during weekends away from boarding school and visits when he would be molested.

"If I didn't go to see Theodore I was always going to be asked by my brothers and sisters or my dad, 'Why didn't you go see him?'"

"Time is getting close for your visit back east," McCarrick wrote to Grein while he was at boarding school at the Woodside Priory School in California in the 1970s. "I'll be calling home one of these days to check on arrangements." He signed the note "Love to all, Your uncle, Fr. Ted."

Applewhite said the text betrays McCarrick's clear expectations that Grein would come visit, as well as the involvement of his family in arranging the rendezvous. A postcard visible to the family, she added, is the most open form of communication, and was likely meant to show Grein that what McCarrick was doing wasn't wrong.

"To send it in a postcard says 'I have nothing to hide,'" Applewhite said. 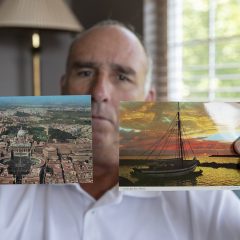 James Grein, 61, poses for a photo at his house in Sterling, Va., on July 26, 2019, holding postcards from Florida and the Vatican sent to him as a boy by now-defrocked Cardinal Theodore McCarrick. The correspondence to the young men he is accused of sexually abusing or harassing is a window into the way a predator grooms his prey, according to two abuse prevention experts who reviewed the writings for The Associated Press. (AP Photo/Manuel Balce Ceneta) This July 26, 2019, photo shows a postcard from the Vatican for James Grein when he was 12 years old, written by now-defrocked Cardinal Theodore McCarrick. Grein, 61, says McCarrick used to write him postcards that were included in letters to his father, and that McCarrick’s exalted place in his family was key to his abuse. (AP Photo/Manuel Balce Ceneta)

In 1981, McCarrick was named the first bishop of Metuchen, New Jersey. Last year, his seminarian victims began speaking out about how their former bishop would refer to them as his "nephews" and insist that they call him "Uncle Ted" — creating an informal family relationship that would make it very difficult for any of them to ever report misconduct, Applewhite said.

Former seminarians recounted how McCarrick would invite groups of young men for weekends fishing or at his beach house, always inviting one extra to force someone to share his bed. McCarrick later denied having ever had sexual relations with anyone but admitted to an "unfortunate lack of judgment" in sharing a bed with the men, according to a 2008 email to the Vatican.

In correspondence to one Metuchen seminarian after he was named archbishop of Newark, N.J., McCarrick detailed his jet-setting ministry in the summer of 1987, when he traveled to Russia and Poland at the height of St. John Paul II's efforts to bring down communism in Eastern Europe. Later that year, McCarrick told the young man how he accompanied John Paul on his U.S. pilgrimage.

"It's reminding him of his position of power, that he has all this access to special privileges," said Elizabeth Jeglic, professor of psychology and expert in sexual violence prevention at John Jay College of Criminal Justice. She said the message to the seminarian was: "'You stay with me, you get access to that.'"

The seminarian later wrote to another bishop that he had witnessed McCarrick and other would-be priests engaging in sexual activity during a fishing trip and that McCarrick had groped him during an overnight stay at McCarrick's Manhattan apartment later that summer. He said he vomited in the bathroom that Friday night because of the trauma.

In a letter soon after , McCarrick wrote: "I just want to say thanks for coming on Friday evening. I really enjoyed our visit." 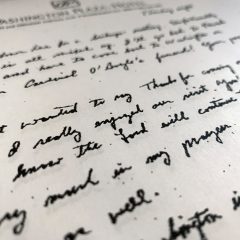 This July 2019 photo shows a detail from a copy of a 1987 letter written by then-Newark, N.J., Archbishop Theodore McCarrick to a seminarian in the state. At center, McCarrick writes, “I really enjoyed our visit.” Letters and postcards the clergyman wrote to three men he is accused of sexually abusing and harassing show how he groomed his victims, experts say. (AP Photo/Wong Maye-E) 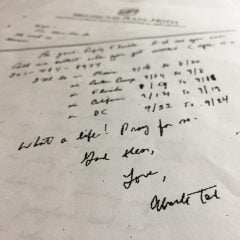 This July 2019 photo shows a detail from a copy of a 1987 letter written by then-Newark, N.J., Archbishop Theodore McCarrick to a seminarian in the state. The closing reads, “Love, Uncle Ted.” Letters and postcards the clergyman wrote to three men he is accused of sexually abusing and harassing show how he groomed his victims, experts say. (AP Photo/Patrick Sison)

In eight letters to the seminarian, McCarrick repeatedly urged the young man to call him collect at his offices in Newark, providing his direct line and the dates of his comings and goings. He also urged him repeatedly to come visit — a frequency of demanding contact that Jeglic said constituted harassment and an attempt to "keep him in the web."

"We have an almost full house, and by tomorrow the couches and maybe the floor will be taken — but we would have made room even for a big guy like you," McCarrick wrote him.

In a sign of possible desperation, he added: "P.S. Do you even get my letters?"

McCarrick also referred to an incident where the two met a Mafia-associated businessman who was gunned down shortly after in a mob hit.

"Thank God we didn't go to dinner on Saturday night!" McCarrick wrote. "We'd have been in the middle of a gangland rub-out."

In a subsequent letter Aug. 28, 1987, written on Admirals Club letterhead during a flight in Poland, McCarrick referred again to the murder in his trademark small script: "You stick with your uncle and you'll really meet exciting people."

Jeglic said the reference to the mob hit was a shared, illicit experience that "bonds you in secrecy."

Another seminarian, the Rev. Desmond Rossi, was studying for the priesthood at Immaculate Conception seminary in Newark, New Jersey, when McCarrick was named archbishop. He said McCarrick had made it a point to greet Rossi's father at Mass, and wrote to Rossi when the young man took a sabbatical in 1987.

In the letter, McCarrick wrote that he had just been with John Paul during his trip to Miami and was praying for Rossi to come back.

"You're still very much part of the family," McCarrick wrote.

Rossi said he now sees McCarrick was grooming him with the letter, particularly his reference to John Paul and being part of "the family."

"Here's an archbishop of the church telling a 25-year-old kid who is interested in priesthood that he just left a meeting with the pope," Rossi said. "This is a major deal!"

Rossi ultimately moved to another diocese in 1989, after a meeting where he said McCarrick rolled his chair "inappropriately close" and touched Rossi's leg as he spoke.

"At that moment, pretty much in my mind I thought 'I'm leaving this diocese,' because it was that uncomfortable," Rossi said.

As much as he considers himself a survivor, Rossi acknowledges that McCarrick was a gifted, charismatic pastor. Applewhite said abusers aren't just monsters — as evidenced by McCarrick's own correspondence looking out for his seminarians.

"If we're only looking for demons, we're not ever going to catch anyone," she said.

Links to the letters:

September 3, 2020
Related Posts
By Jack Jenkins
Head of Federal Election Commission calls separation of church and state a ‘fallacy’ and 2020 election a ‘spiritual war’
By Claire Giangravé
Pope Francis’ team joins up with star athletes like Ronaldo to say: ‘We all run together’
By Yonat Shimron
Mark Galli, former Christianity Today editor and Trump critic, to be confirmed a Catholic
By Alejandra Molina
After pushback, US Navy agrees to retain contracts with civilian Catholic priests at California naval bases
By Claire Giangravé
Global missionary efforts have taken a hit in the time of coronavirus